Development of the I

The 'I'-consciousness is the development goal for humanity in the current planetary stage Earth, building on the principles of physical, etheric and astral body received in previous planetary stages.

The principle is such that the spiritual hierarchy that has evolved to the level of self-sacrifice - see Conditions of Consciousness - sacrifices its lowest element which then gives birth to something totally new in evolution, to a new creation. In this case this hierarchy are the Spirits of Form (SoF). The process started in the Lemurian epoch and lasted upto the end of the Atlantean epoch, as the substance of the SoF 'rippled into' or 'took hold of' Man's existing bodies. Because there are three lower bodily principles, we can distinguish three phases and call them sentient soul, intellectual soul, and consciousness soul.

Before the middle of the Lemurian epoch the divine consciousness hovered over the Earth where Man lived in its lower bodies. Then happened the divine intervention with 'Jehovah' (the name of one of the SoF, called Elohim in the Bible): the image can be used of water dropplets in a sponge that are now being dispersed into individual dropplets of first stage I-consciousness in physical Man.

Man's I-consciousness lives in the 'warmth' element and ether, and hence has a relationship with the Thrones and the Archai which lie at the origin of that warmth. Therefore the Archai really 'carried' Man's I-consciousness substance and evolved it in the previous planetary stages so it became ready for 'individuation' and released into human individuality.

Schema FMC00.046 depicts how the Spirits of Form (known in the bible as Elohim) sacrificed the lowest member of their being and how that rippled into the structure of Man in the Lemurian and Atlantean epochs, thereby laying the foundations of the I. It follows the metaphoric imagery of the sponge and the dropplets. 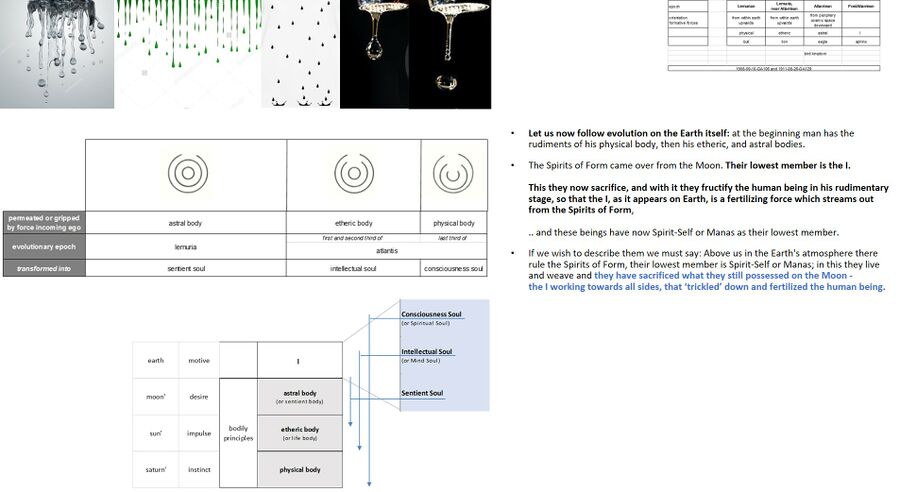 Schema FMC00.047 shows that, after a transition and changes with a hardening of earth and the human physical body, we have a recapitulation in the current Postatlantean epoch whereby the 'I' now has the physical and etheric bodily structure to develop it's autonomeous self-consciousness.

FMC00.109 is the illustration of the the human group soul tree concept as was done in the Pythagorean school, also relevant for ancient memory and consciousness 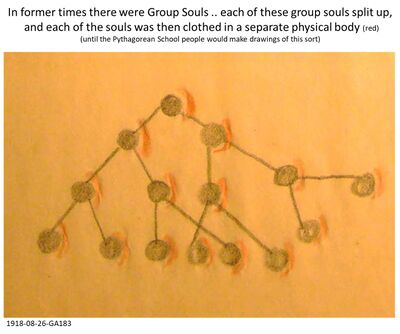 FMC00.194 shows how during the preceding planetary stages (and recapitulations on Earth), the elements and ethers were created, in a way that the spiritual hierarchies all remain present in the totality of the whole spectrum of elements and ethers. See 1925-01-11-GA026 below.

FMC00.147 provides an overview to contemplate how the kingdoms of nature on Earth originate in previous evolutionary stages. The right column illustrates 1925-01-11-GA026 below. 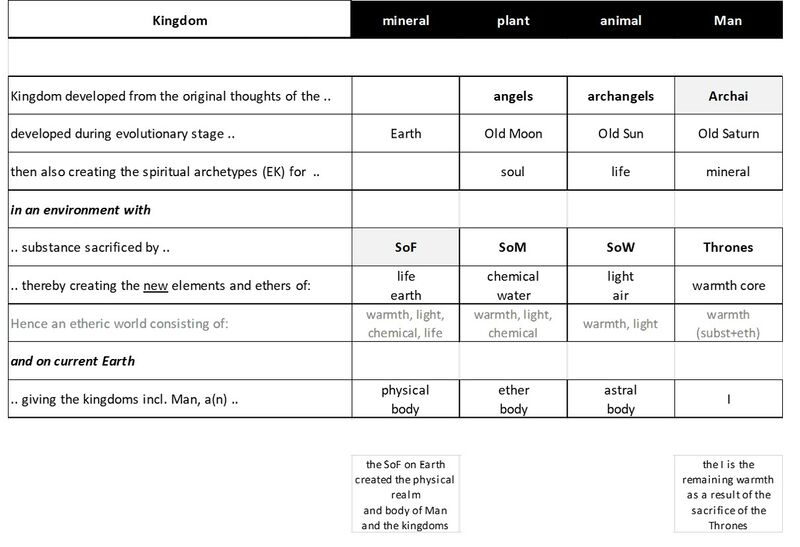 See also 1908-05-25-GA103 on the Human astral body to see how the development of consciousness is related to the physical body as its enabling support tool or environment.

The elementary realm of Man is that part of the will-substance of the Thrones, which has not been condensed into the elements of air, water and earth, but has preserved itself and developed further in soul-spiritual form. It was the thought-force of the Archai during the Old Saturn evolution, and it continued to live in the Archai as their soul force during the Old Sun and the Old Moon evolutions, with a consciousness that became gradually clearer. Today, to a certain extent, it is "released" by the Archai, for the purpose of achieving an independent conscious existence. That which has been bequeathed by the Thrones in this soul-spiritual form, creates the substance for man's "actual self". Looking back into a human being's repeated lives on Earth, we find three distinct stages. In a remote past, man did not exist with individuality of being, but as a germ in the Divine and Spiritual. As we look back into this stage we find not yet a human being but Divine-Spiritual Beings: the Archai.

Now we must think of a point in the physical brain in the place between the eyebrows, only about a centimetre lower, and a second point in the etheric head which would correspond to this.

In the Atlantean these two points were still far apart and evolution consisted precisely in the fact that they continually approached each other. In the fifth Atlantean period the point of the etheric head drew in to the physical brain and by reason of these two points coming together there developed what we possess to-day: calculation, counting, the capacity of judging, the power of forming ideas in general, intelligence.

Formerly the Atlanteans had only an immensely developed memory, but as yet no logical intellect. Here we have the starting point for the consciousness of the “I.” A self-reliant independence did not exist in the Atlantean before these two points coincided, on the other hand he could live in much more intimate contact with nature.

.. regarding the external bodily appearance of our Atlantean forefathers. We have seen that the physical body, visible now to the external human sense organs, only slowly and gradually reached the present density of flesh which it now possesses. We said that not until the last part of the Atlantean period did men bear some resemblance to their present form.

Even toward the last third of the Atlantean period they were still essentially very different creatures from the men of today, although to the external senses they appeared much the same. ...

Let us suppose that a person endowed with clairvoyance is observing a horse and a man.

[The Atlantean head] In the human beings of the present, the physical and etheric heads coincide and in form and size they are very nearly alike. This, however, has not always been the case. We find it so only in the last third of the Atlantean period. The ancient Atlanteans' etheric head protruded far beyond his physical head, then by degrees these two grew together and it was in the last third of the Atlantean period that the physical and the etheric heads exactly coincided. In the brain, near the eyes, there is a point which coincides with a very definite point in the etheric head. These points were apart in ancient times; the etheric point was outside of the brain. These two important points have drawn together and only when this occurred did the human being learn to say “I” to himself. Then appeared what we yesterday called the “Consciousness Soul.”

Through the coincidence of the etheric and physical heads, the appearance of the human head changed very greatly, for the head of the ancient Atlantean was still very different in appearance from the head of present human beings.