The centaur is an image of half man - half animal, as Man was in the Lemurian epoch before the Separation of moon. It still continues in Man today, as the Human astral body is made up of a lower component (animalistic drives and passions, lower chakras), and a higher component.

For the lecture reference extracts for Schema's FMC00.134 and FMC00.137 below, see Human astral body

Schema FMC00.277 below contains illustrations of the Centaur from Greek and Roman cultures, the middle ages and in art with examples from Botticelli and Odilon Redon). Chiron who was held in Greek mythology to be 'the wisest and justest of all the centaurs'. The second upper left illustration shows the 1st century AD fresco The Education of Achilles by Chiron. 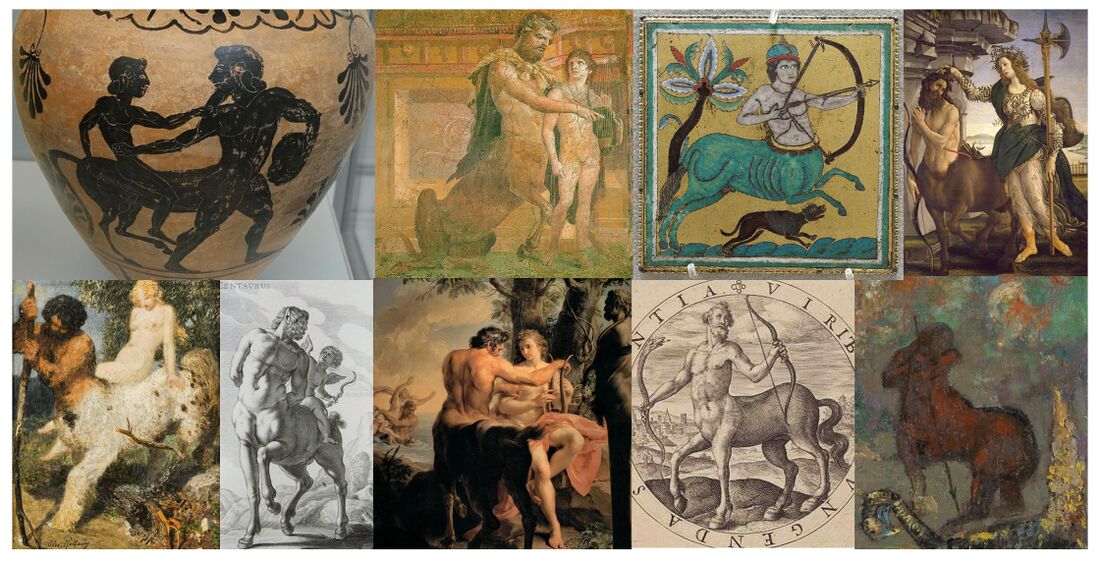 Schema FMC00.137 is an infographic as a reference to the moment in the Lemurian epoch where the fusion of the lower physical and higher spiritual part of Man took place, the human being assumed its upright position, and first got his astral body made up of a lower and a higher component. 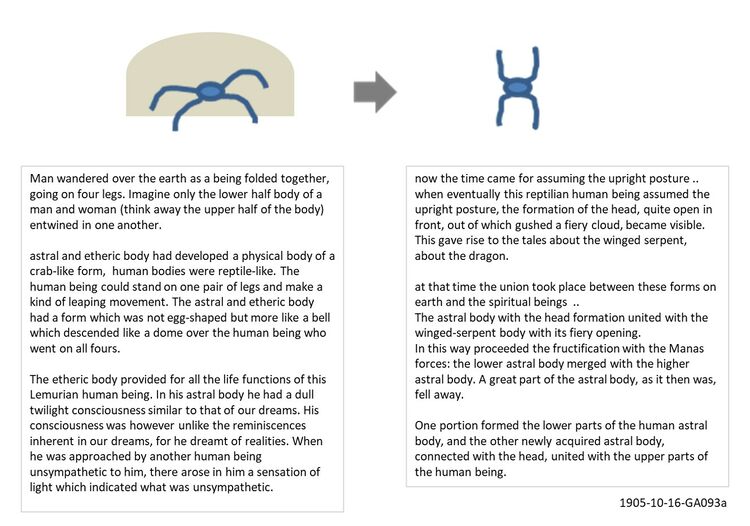 Schema FMC00.278 describes the above Schema FMC00.137 and how the upper and lower parts of Man merged into a new dual structure with a higher spiritual and lower physical parts.

Schema FMC00.134 (see quote below) depicts the evolution of Man's astral body in the current Postatlantean epoch, linked to the development of the sentient, intellectual and consciousness soul. Compare also with schemas FMC00.013 and FMC00.129. See 1923-08-31-GA227. 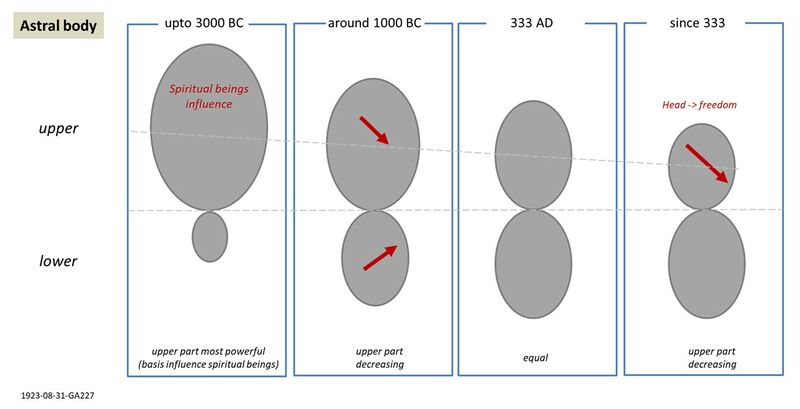 Man was an animal then, which for the first time could move about on the islands that were forming in the water. In his upper parts he became ever finer, and at the top he actually preserved the flower-form. He was illuminated from above by an organ that he carried on his head like a lantern. The then human form is rightly conceived if we see the upper part as etheric and the lower part as animal-like. In older pictures of the Zodiac, the form of the Archer is shown as an animal below and a man above. These signs portray the stage of evolution at which man then stood, even as the centaur reflects an actual stage of evolution-upward man and downward horse. The horse must not be taken literally, but as a representative of the animal kingdom. This was the artistic principle in earlier times; the artist portrayed what the clairvoyant described to him or what he himself had seen. Artists were often initiates. It is said that Homer was a blind seer, but that means that he was clairvoyant. He could look back into the Akashic Record. Homer, the blind seer, was much more seeing in the spiritual sense than were the other Greeks. Thus, the centaur was once an actual human form. When man looked like this, the moon had not yet withdrawn. The moon force was still in the earth, and in man was still what had formed itself during the sun period, the shining pineal gland, which he bore like a lantern on his head.

When the moon withdrew from the earth, sexuality appeared. The centaur-man was still sexless. Sexuality appeared when the sun stood in the sign of the Scorpion, and this is why we always connect sex with this sign. The Scorpion is what in the animal kingdom corresponds to the stage of evolution at which man stood when he had developed sexuality. In his upper half, man was turned toward the cosmic forces, but in his lower half he was a bisexual being. He had become a sexual being. When the clairvoyant pupil of the Egyptian mysteries directed his gaze toward this period of earth-evolution, he saw the earth peopled by men whose lower bodily form was becoming denser, in harmony with their baser nature, but who had a luminous human shape above.

Then began the time when, through the forces of the moon, the nerve-filaments appeared in the region where the spine now is. The formation above the spine, the present head-region, had condensed and changed itself into the human brain; that was the completely transformed light-organ. Attached to this was the spine, from which the nerves proceeded, and attached to this in turn was the lower man whom we have described. This was revealed to the Egyptian pupil, and it became clear to him that any being wishing to incarnate on the earth would have to assume the corresponding human form.

With other brotherhoods, which above all wish to bypass the Mystery of Golgotha, it is a matter of exploiting the twofold nature of the human being. This twofold nature of the human being, which has entered the fifth post-Atlantean period just as man did, contains the human being but also, within the human being, the lower animal nature. Man is to a certain extent really a centaur; he contains this lower, bestial, astral nature. His humanity is somehow mounted upon this astral beast. Through this cooperation of the twofold nature within the human being there is also a dualism of forces. It is this dualism of forces that will be used more by the egotistical brotherhoods of the Eastern, Indian stream in order also to mislead Eastern Europe, which has the task of preparing the sixth post-Atlantean period. For this, forces from Sagittarius are put to use.

The occult schools that were inaugurated here and there keep such things secret for reasons that will not be explained today. They still keep them secret, although today these things must be brought to the consciousness of mankind. Since the last third of the nineteenth century, means and ways were given whereby that which occult schools have kept back (in an unjustified way, in many cases) becomes obsolete. This is connected with the event that I mentioned to you — the event which took place in the autumn of 1879. Now we can only lift the outer veil of this mystery; but even this outer veil is one of the most important pieces of knowledge concerning man.

It is indeed a head that we bear within us as the head of a second man; it is a head, but also a body belongs to this head, and this body is, at first, the body of an animal. Thus we bear within us a second human being. This second human being possesses a properly formed head, but attached to it, the body of an animal — a real centaur. The centaur is a truth, an etheric truth.

It is important to bear in mind that a relatively great wisdom is active in this being — a wisdom connected with the entire cosmic rhythm. The head belonging to this centaur sees the cosmic rhythm in which it is embedded, also during the existence between death and a new birth. It is the cosmic rhythm that has been shown in a threefold way, also in numbers — the rhythm on which many secrets of the universe are based. This head is much wiser than our physical head. All human beings bear within them another far wiser being — the centaur. But in spite of his wisdom, this centaur is equipped with all the wild instincts of the animals.

Now you will understand the wisdom of the guiding forces of the universe. Man could not be given a consciousness which is, on the one hand, strong and able to see through the cosmic rhythm, and on the other hand, uncontrolled and full of wild instincts. But the centaur's animal nature — please connect this with what I have told you in other lectures dealing with this subject from another point of view — is tamed and conquered in the next incarnation, during his passage through the world of cosmic rhythms between death and a new birth. The foundation of our lung-system in the present incarnation appears as our physical head, although this is dulled down to an understanding limited to the senses, and what lies at the basis of our lung-system appears as an entire human being whose wild instincts are tamed in the next incarnation. The centaur of this incarnation is, in the next incarnation, the human being endowed with sense perception.

Now you will be able to grasp something else: — You will understand why I said that, during man' s existence between death and a new birth, the animal realm is his lowest realm and that he must conquer its forces. What must he do? In what work must he be engaged between two incarnations? He must fulfill the task of transforming the centaur, the animal in him, into a human form for the next incarnation. This work requires a real knowledge embracing the impulses of the whole animal realm; in the age of Chiron, men possessed this knowledge atavistically, in a weaker form. Although the knowledge of Chiron is a knowledge weakened by this incarnation, it is of the same kind. Now you see the connection. You see why man needs this lower realm between death and a new birth; he must master it; he needs it because he must transform the centaur into a human being.

What Anthroposophy sets forth has been attained only in single flashes outside the occult schools. There have always been a few men who discovered these things, as if in flashes. Especially in the nineteenth century a few scattered spirits had an inkling, as it were, that something resembling the taming of wild instincts can be found in man. Some writers speak of this. And the way in which they speak of these things shows how this knowledge frightens them. High spiritual truths cannot be gained with the same ease as scientific truths, which can be digested so comfortably by the mind. These high truths often have this quality; their reality scares us. In the nineteenth century some spirits were scared and tremendously moved when they discovered what speaks out of the human eye that can look round so wildly at times, or out of other things in man. One of the writers of the nineteenth century expressed himself in an extreme manner by saying that every Man really bears within him a murderer. He meant this centaur, of whom he was dimly conscious.

Centaur in art and symbols

Certain characteristics of animals stand in special relationship to Man, eg the horse has a special relation to Man's cognitive abilities. In the Hyperborean epoch, in order to be able to take in Manas in the middle of the Lemurian epoch, Man let go of characteristics that later developed in the Animal Kingdom into the horse. The horse only developed in the Atlantean epoch. That is why the horse was often used as a symbol or seen as holy by ancient cultures. Something like a Centaur has indeed existed in the transient phase as Man got rid off what later became horse nature. That is also why initiates that had come to higher development were given a horse as symbol. (1904-11-11 from steinerdatenbank, last lecture in cycle in GA089 but not part of that GA and not clear if published).

See also the archer Sagittarius, portrayed as a kind of centaur, half horse half man, Man sitting like a centaur upon an animal's body

Such legends contain deep wisdom, much deeper than our science contains. Not without reason is such a type as the horse employed in legend. Man has grown out of a form which once contained within it that which is now embodied in the horse; and in the form of the centaur, art still represented man as connected with this animal in order to remind him of the stage of development out of which he had grown, from which he had struggled free in order to become the present human being.

What does this mean for astral senses (re chakras), and the fact that these can only be used in the spirit world (quote RSL)