Free Man Creator (or in short FMC) is the name of a project working on study materials for spiritual science, see more on the About page.

The name coins an important essence of the message of spiritual science, more about this on the topic page for Meaning of Free Man Creator.

Its is organized in six main fields of study, as explained below. These form the base materials from which essays, study modules and others can be derived. This website is a front end to the project to present some materials, and can be used as an introductory navigation tool.

The schemas produced by the project used on this site and are freely downloadable in the FMC schemas section.

Examples of essays, previously published as blogposts, can be found in the Essay section.

The FMC project work is focused on 'the mother' of 'core spiritual science' or 'coranthroposophy', and not on theapplication areas (such education, biodynamic agriculture, etc.). The latter are therefore not covered in depth, much more information already exists for these in the world.

Rather, the inspiration is to see the spiritual scientific teachings as a contemporary version of the Mystery School tradition going back all the way from the old Egyptian and Greek mystery centres upto the School of Chartres, let's call it the Free Man Creator school.

The scope is to cover the full extent of the spiritual scientific worldview, and this is structured into six main domains, fields or work areas:

The first three make up the foundation for the spiritual scientific worldview. They make up one logical whole as they are completely inter-related, as depicted by schema FMC00.101 below. 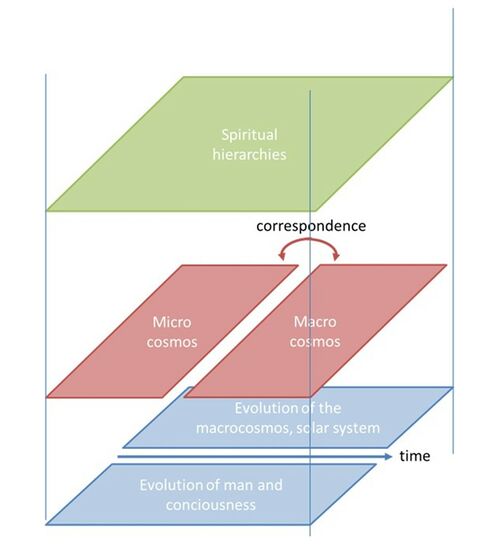 'WorldView Spiritual Science' builds on this foundation and brings the spiritual foundation knowledge to our experiential and practical world (nature's kingdoms, degrees of consciousness, music, ..). So this is an upgrade to our worldview, as spiritual science offers a meta-representation or paradigm to contemporary materialistic science which is limited to physical matter and mundane consciousness. 'Initiation' is about practical exercises and the great work on one's Self.

'The Michaelic stream' is an extra addition about the story of spiritual science throughout the ages, from the ancient Mystery Schools and their Initiation rites over philosophy and theosophy to contemporary anthroposophy, and the important link with Michael and the Christ Impulse. As one gets deeper into spiritual science, one realizes one's very personal connection with this stream and/or one's personal karma.

Each work area is made up of 'logical chapters', whereby each logical chapter or theme can be considered to consist of at least one (or more) study volume(s).