Spiritual science provides a worldview foundation: a way to look at and understand the world, as the basis for how Man stands and acts in the world.

From the foundational understanding of the spiritual realities underlying our current sensory experience with contemporary limited Waking Consciousness, follow angles of perspective to use these insights to conduct various human activities in the world. For example: education, agriculture, medicine, science.

Within anthroposophy, the language used to denote the above difference is that 'core anthroposophy' has been called 'the mother' of the other applied areas or children.

One is not an anthroposophist just to have a worldview, but one is with his whole being as Man in the world.

Schema FMC00.335 depicts the various anthroposophical application areas. Note the drawing is illustrative and not intended to be exhaustive and hence completeness is no subject for debate. For example it does not include architecture, but then it does not include beekeeping either (which is not supposed to fit under agriculture) 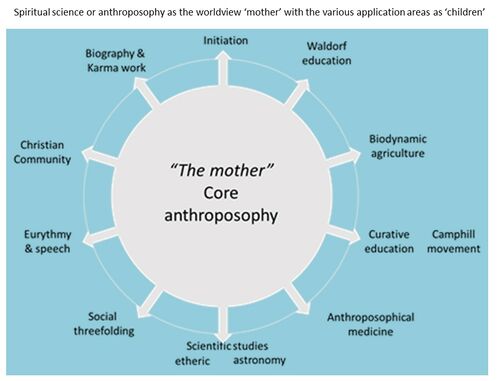 Yes, rejoice in the child, but don't forget the mother and the care and concern due her.

That care and concern are owed her by the Movement for Religious Renewal, too, but most particularly by the members of the Anthroposophical Society.

For what a thing it would be if the Society were to be slighted, if anthroposophists were to turn away from it to an offspring movement, not in the sense of saying that those of us who have grown together with the Anthroposophical Movement can be the best advisors and helpers of an offspring movement, but instead turning away from the Anthroposophical Movement of which they were members with the feeling that they have at last found what they were really looking for, something they could never have found in anthroposophy!

Though there is every reason to be overjoyed at the parent's concern for the child, it must be clearly recognized that the child cannot prosper if the mother is neglected.

If anthroposophists who join the Movement for Religious Renewal leave much to be desired as members of the Anthroposophical Society, we would face exactly the same situation as would have to be faced in the case of a Waldorf School teacher who, though a first-rate man in his field, contributed too little to the Society. But this is just the fate we have been experiencing since 1919, little as the fact has been noticed.

I am speaking a bit radically, but that may help to make my meaning clearer. I wanted, in this example, to show how important it is for the Society to be able to meet life's challenges.

Now let us turn our attention to another matter. For quite some time past, able members of the Society have been at work in the most varied branches of scientific endeavor. I am truly speaking with the greatest inner and outer restraint when I say that we have absolutely top-notch scientists who are not being given the appreciation they deserve from us. They have taken on the responsibility of developing the various branches of science within the Society. In the Society's beginning phase it had to approach people purely as human beings. It simply could not branch out into a whole range of different fields; it had to limit itself to speaking to people from its innermost heart, as one human being speaks to another. Its task was first to win a certain terrain for itself in the world of human hearts before going on to cultivate any other field. Then, since anthroposophy has the capacity to fructify every aspect of culture and civilization, scientists appeared as a matter of course in the Society and were active in their fields. But again, my dear friends, it is possible for a member to be a first-rate scientist and yet ignore the Society's basic needs. A scientist can apply anthroposophical insights to chemistry and physics and the like in the most admirable way and still be a poor anthroposophist. We have seen how able scientists in these very fields have withdrawn all their strength from the parent society, that they have not helped nurture the Society as such. People who, in a simple and direct way, seek anthroposophy in the Society are sometimes disturbed to hear, in the way these scientists still speak with an undertone reminiscent of the chemical or physical fields they come from, for though chemistry, physics, biology and jurisprudence are still connected by a thread with the universally human, the connection has become remote indeed. The essential thing is not to forget the parent. If the Society had not fostered pure anthroposophy in its innermost heart for one and a half decades, the scientists would have found no place in it to do their work. Anthroposophy provided them with what they needed. Now they should consider how much their help is needed in so fostering the Society that some return is made to it for what anthroposophy has contributed to their sciences.

This will perhaps help us to look more closely at what has been going on in a wide range of activities and then to admit a fact that, though it may sound trivial, is actually anything but that. Since 1919, anthroposophy has given birth to many children, but the children have been exceedingly neglectful of their mother.

These [daughter] institutions that have come about [such as the Waldorf School and the Federation for Threefolding], they have not always been taken in such a way, by those who represent them, that the saying is felt, I would like to say, in a modern spiritual sense: Thou shalt honor thy mother and thy father, that it be well for you on earth.