Biodynamic agriculture is a term coined after Rudolf Steiner's eight-lecture agriculture course (GA327) in June 1924, and furthered by Ehrenfried Pfeiffer (1899-1961). It has been translated in at least 16 languages and is thé seminal text for natural organic or biodynamic agriculture and farming. It is not a handbook, but rather offers spiritual scientific perspectives on agriculture based on an understanding of the processes of nature, rather than the limited chemistry perspective of contemporary mineral science. Commentaries to the course are available eg from Scharff and Nastati (see References section below).

Biodynamic agriculture has developed into a worldwide movements in over 40 countries. It includes two main practical aspects:

The biodynamic preparations are really processes to create materials with a soil activating vitalizing effect. There are seven preparations as originally conceived by Rudolf Steiner:

The preparation processes make use of cosmic influences by storing the preparations in the soil for a year, some of them stored in animal organs or horns (see table below)

After research showed the efficacy of these original preparations, other people have developed and experimented with preparations (eg Hugo Erbe, Glen Atkinson, and others)

Although a huge amount of information is available around the worldwide biodynamic agriculture movement, and especially all is practical aspects, its spiritual scientific workings are not always clearly explained. For this one needs a study and appreciation of three aspects:

Schema FMC00.038 is from Lievegoed (1951), see References for an explanatory discussion of the preparations: 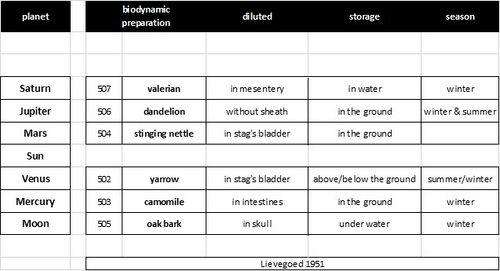 You may know that after the harvest the farmers dig deep pits into which they pour the new potatoes. Then they cover them up. At the end of winter, they take out the potatoes, their quality preserved. Stored simply in the cellar, they would have gone bad. But in the soil they kept well.

Why is this so? This is a very interesting question, which the farmers themselves usually cannot answer. Well, if you were a potato and were dropped into this pit, except for not having anything to eat, you would feel very comfortable there, because the warmth of the summer sun is preserved there. Towards the end of summer, the forces of the sun gradually extend down into the earth and are stored there. If you dig down in January, the warmth and all the other forces are still down there, five feet below the surface.

[Forces of the Sun]

If you were a potato stored down there, you would feel quite comfortable; you would not have to worry about heating, because, first of all, there would still be the warmth of summer around you and, secondly, the sun forces would radiate up from down below. These potatoes have a good time of it. In a way, they get to enjoy the sun now. In summer, they did not enjoy it much; it even caused them discomfort. If they were creatures with heads, they would have had a headache from the sun. But if they are granted the privilege of being buried in the earth, the potatoes can really luxuriate in the pleasures the sun now provides.

From this you can gather that the sun affects life not only while it is shining directly on something, but also when its forces have been absorbed and retained somewhere.

Now something peculiar happens. Remem­ber I told you that when a being or substance is outside the earth it has a destructive effect; it is either poisonous (like carbon dioxide in our earlier example) or it produces scales and hardness like the sun.

However, in winter the sun does not work on us from the outside. It works from inside the earth where its forces are stored. There it regenerates also the reproductive forces, which in our time also come from the sun, not from direct radiation but from what is reflected by the earth during winter.

Similarly, if we inhale carbon dioxide, it is poisonous. But we need it in the form that in inside the body. Without it we would not have any carbon, and without carbon we would not have any structure in our bodies. We need carbon dioxide inside us, where it is ben­eficial. But approaching us from the outside, it is poisonous. The sun's rays coming from the outside produce shells in animals. But if the sun's rays are caught and reflected from inside the earth, then they produce life and enable animals to reproduce.

Let us now look at plants. You know that some plants propagate through so-called cuttings. When these parti­cular plants grow up, you can cut off a twig in the proper way and put this cutting into the soil, where it will grow as a separate plant. Certain plants can propagate this way.

How is this possible? They can form independent life out of such pieces of themselves, because their seeds are in the earth in winter. This is indeed a very important aspect for plants. If you want them to grow properly, they must actually remain in the earth throughout the winter, so that they can emerge from it. Of course, there is also summer grain, but we can talk about that some other time. Most plants can grow only when they develop their seeds in the earth. Some bulbs can also grow in water, but that requires special measures. Most plants need to be placed into the earth where they can then develop their growth forces.

What happens when a seed is put into the soil?

The tiny grain now has the pleasure of absorbing the forces the sun has radiated into the earth.

Plants can grow directly out of the soil. They have roots below, through which they push up. They develop leaves, then blossoms, and finally new seeds. However, as you know, once a plant develops blossoms, it no longer grows upwards. Its seed is placed into the soil, from where it develops leaves and blossoms. Then the growing process stops, and the plant quickly produces seeds. If it didn't do that right away, the sun's forces would reach only the petals, which are of course infertile. The plant would develop a huge, beautiful blossom of many colours, but there would be no seed. This is why at this stage the plant hurries to produce seeds while there is time.

You see, the sun has the ability to make plants pretty when its rays reach them from the outside. Flowers in the fields, for instance, receive their beautiful colours from the rays of the sun shining on them from above. However, just as the sun dries up and compacts part of the oyster into the shell, so it would eventually dry up and destroy the plants. ...

.. the same thing holds true for plants. While they grow out of the soil, they overflow with vitality, which gradually fades away. Finally, they must gather up all of their remaining energy and focus it on the seeds. You see, the sun produces beautiful leaves and colourful blossoms, but in the process it destroys the plants. The pretty blossoms do not contain any reproductive energy whatsoever.

What do plants do when you put their seeds into the earth?

They do not simply cuddle into the sun-warmed soil, but extend their growth forces to the leaves; they extend them upwards. These green portions are developed by sun forces, by warmth, light, and so forth. This is how the sun-forces the plants get from their seeds move upwards. The sun-forces reaching plants from the outside, however, will destroy them in the process of creating very beautiful blossoms. The seeds have their vitality from last year's sun warmth, which was stored in them all winter long. The seeds do not come from this year's sun; that is an illusion. This year's sun creates the beautiful blossoms. But the seeds contain last year's sun forces, which were poured into the earth and which sustain the entire growth of the plant.

This would not be quite so easy for animals, which depend more on the sun's warmth reaching them from the outside, from the earth, and renewing them. This is because animals do not absorb the sun forces as directly as plants do; the latter, as we have seen, also bear in their bodies and their seeds the sun's warmth from the previous summer, warmth that had been stored in the earth.

This is a marvellously interesting phenomenon. If we look at it in the right way, we can say that plants and ani­mals can procreate only through the effects of the sun. Yet the sun up there in the sky, away from the earth, is the very factor that destroys the reproductive capacity.

This is just like the case of carbon dioxide. If we inhale it, it will kill us. But if we carry it inside us, it will enliven us.

We can see this in plants; they produce seeds capable of reproduction only out of the sun-forces stored since the previous summer. The forces that make the new plant beautiful come from this year's sun. This is generally true: inner qualities grow out of the past, but beauty is created by the present.

Demeter Biodynamic Certification, established in 1928 as the first ecological label for organically produced foods, is used in over 50 countries to verify that biodynamic products meet international standards in production and processing. It is issued by Demeter International, a certification organization for biodynamic agriculture. Its name is a reference to Demeter, the Greek goddess of grain and fertility.