Certain processes in nature cause physical elements to undergo a biological transmutation into other physical elements. This happens in plants (see: Plant kingdom) and also in the organs of Man's metabolic system.

What takes places in Nature and in Man can be described by the ancient principle of 'solve et coagula' as explained on Alchemy, or a more modern spiritual scientific language The two etheric forces.

In the scientific paradigm of mineral science, the fact that a physical element would change is impossible and defies the laws of (mineral) physics. An explanation of this apparent paradox is given by the fact that mineral science limits its scope to the mineral element 'earth' and does not study the laws of the etheric (represented by the element 'water'), see Formative forces and the 1921-06-GA205 reference.

The same applies to Potentization, the principle underlying homeopathy, which is also based on the laws of the etheric forces.

Transmutation was discovered and studied extensively in the 19th century by Albrecht von Herzeele (see coverage below). Rudolf Steiner confirmed this principle of transmutation, and experiments were redone in the 20th century by a.o. Rudolf Hauschka, Louis Kervran and Wim Holleman. Nevertheless (as so many things), this is today regarded fringe or pseudo science, and rediculized by mineral science. See further: worldview wars.

Schema FMC00.011 shows an example of experimental results, from Rudolf Hauschka laboratory experiments in the years 1934-1940 that confirmed von Herzeele's findings (see References below). Because the tests were continued over years, it shows that the moon rhythm is subservient to a stronger annual sun rhythm. Notice how the curves show a powerful dynamic upto say June period, whereas in the second year-half there is hardly any dynamic. Also remarkable is the 'cross-over' where the new-moon minima overrides the full-moon maxima curve around the June period, after which both curves quiet down. 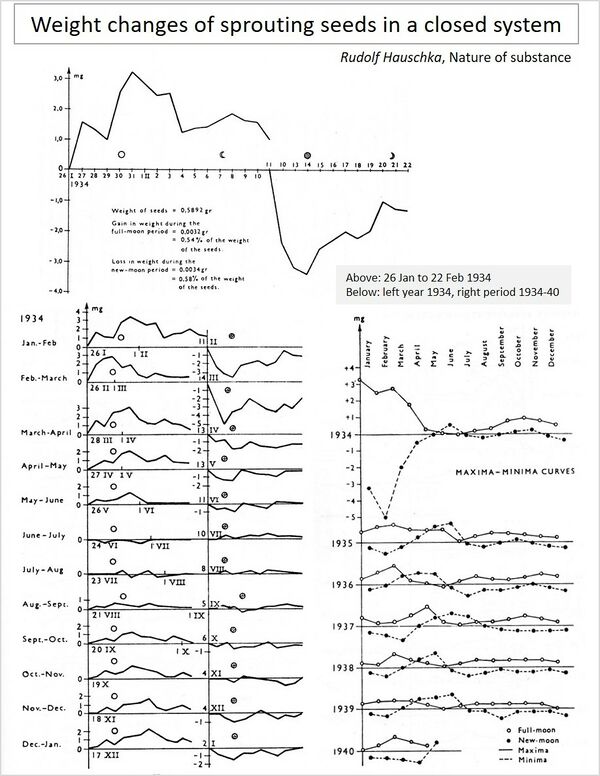 .. (1821-unknown) spend most of his life investigating the apparently innocent question: 'Where do the minerals in plants come from?'

Von Herzeele grew plants without soil, using solutions whose mineral content he measured and controlled. He found that germinating seeds without a supply of calcium had an increase of calcium in the young plants analyzed 30 days after they germinated. Like scientists before him in England, France and Germany he found that there were elements in the ashes of the plants he grew that could not have got in from the growth medium. He concluded that 'plants are capable of effecting the transmutation of elements.'

After determining the seeds' average calcium content, he let the rest of the seeds germinate (sprout) under conditions where they were completely isolated from any source of additional calcium. According to the invariance theory, the total amount of calcium in the isolated seeds should have remained constant throughout all subsequent growth. However, when Von Herzeele analyzed the seeds after thirty days, he found that they contained a good deal more calcium than had been present initially. Logically, two explanations appeared most likely. Either the additional calcium had been 'created' (formed out of something that was not physical matter), or else the calcium atoms had come from the transmutation of one element into another.

His findings outraged the scientific community and his books were removed from libraries and his writings banned. Even today the subject is a taboo question that can scarcely be mentioned in scientific circles. Nevertheless he was not the first or only to report this, as similar experiments were done before, and also afterwards.

There is something you must know in this connection. For the scientists of to-day it will no longer argue such entire confusion on our part as it would have done a short time ago. Are not they themselves already speaking frankly of a transmutation of the elements? Observation of several elements has tamed the materialistic lion in this respect, if I may say so. Processes, however, that are taking place around us all the time are as yet utterly unknown. If they were known, people would more readily believe such things as I have just explained.

I know quite well, those who have studied academic agriculture from the modern point of view will say: “You have still not told us how to improve the nitrogen-content of the manure.” On the contrary, I have been speaking of it all the time, namely, in speaking of yarrow, camomile and stinging nettle. For there is a hidden alchemy in the organic process. This hidden alchemy really transmutes the potash, for example, into nitrogen, provided only that the potash is working properly in the organic process. Nay more, it even transforms into nitrogen the limestone, the chalky nature, if it is working rightly.

You know that in the growth of plants, all the four elements of which I have been speaking are involved. Hydrogen also is there, in addition to sulphur. I have told you of the significance of hydrogen. Now there is a mutual and qualitative relationship between the limestone and the hydrogen, similar to that between oxygen and nitrogen in the air.

Even externally, in a quantitative chemical analysis as it were, the relationship between the oxygen-nitrogen connection in the air, and the limestone-hydrogen connection in the organic processes, might well be revealed. The fact is that under the influence of hydrogen, limestone and potash are constantly being transmuted into something very little nitrogen, and at length into actual nitrogen.

And the nitrogen which is formed in this way is of the greatest benefit to plant-growth. We must enable it to be thus engendered by methods such as I have here described.

Scientific research in the 20th century

also covered the transmutation of chemical elements, and in 1927 successfully transmuted pure water in 15% oxygen, 16% hydrogen and 69% nitrgen in the Westinghouse Lamp Co. laboratories. An extract from 'New concept of the universe' (see more on the Walter Russell page)

The age of transmutation of the elements by Man begins when he has full knowledge of the manner in which Nature transmutes one element into another.

Extract below from an internet forum page on wavescience.net (not further researched):

Like Tesla and T. Henry Moray, Russell believed in the transmutation of elements. Russell stated, “All dimension is an illusion, an appearance, due to rising potential, which must disappear into its inevitable sequence of lowering potential and again appear in endless cycles of appearance, disappearance and re-appearance. The efforts of man to transmute one element to another must be governed by this principle, and not upon the theory that another substance will be obtained by knocking out one electron.”

Russell apparently demonstrated the transmutation of gases in a research laboratory at the Westinghouse Lamp Company on September 30, 1927. Witnesses observed what appeared to be the transmutation of hydrogen and oxygen to nitrogen, and then nitrogen back to oxygen and hydrogen. (It has been decades since scientists thought transmutation occurred by “knocking out one electron.” Recent research has achieved low energy transmutation by adding one or more protons to the nucleus.)

Walter Russell died in 1963, but his philosophical and visionary work is carried on by the University of Science and Philosophy. The University was established in 1957 due to the insightful effort of a few great philosophers. The December 1994 issue of the university’s Science Journal published a report filed by the Russell Science Research (RSR) Colorado team of Ron Kovac, Toby Grotz, and Dr. Timothy Binder. Titled, “A Report On The Russell Science Research Team’s Transmutation of Nitrogen into Lithium and Helium,” the abstract is authored by electrical engineer and team member Ron Kovac.

In a 1992/1993 attempt to verify Walter Russell’s 1927 effort at transmutation, the RSR team states that they succeeded when they produced fluorine from water vapor. According to the report, “The first generation experiment utilized water injected into evacuated quartz tubes which were subsequently heated, placed in magnetic fields, allowed to cool while in the magnetic field, and then qualitatively analyzed with an emission spectroscope.”

“The externally applied magnetic fields established shaped potential gradients within the quartz tubes that, according to Russell Cosmogony dual-polarity control gyroscopic plane of rotation concepts, would reshape/reconfigure the atoms centripetal/centrifugal vortices to produce the appearance of a different atom’s transmutation!” (3) A July 1994 test of the transmutation with a computerized mass spectrometer (also called a residual gas analyzer) apparently confirmed the results “as indisputable and can be easily reproduced in any sophisticated laboratory.”