Potentization is a process to awaken non-material spiritual influences in matter, through controlled consecutive steps of of dilution and dynamization. The mineral substance we see today has passed through various stages in which an original spiritual seed got form and various layers of clothing as it solidified down to physical matter. With potentization, matter gets processed back into those earlier, higher states. Here the forces at work are not centric gravitational but peripheral etheric forces.

Potentization is the underlying principle on which Homeopathy is based, a medical treatment aimed at the Human etheric body and not directly the physical body, hence the laws of the etheric formative forces need to be considered.

Background on potency vs dilution

A substance like salt can be diluted in water until it fully dissolves. With even greater solution, the dissolved substance keeps on expanding like a gas upto the point it can no longer be detected by taste or chemical reaction, not even with advanced methods such as spectral analysis. At a certain point, say a dilution of 1: 10^17 (1 mg of salt in 10 million liters of water) a point is reached where it can be argued there is not a single molecule left in the solution. Nevertheless homeopathy has shown the therapeutic effects on such highly diluted substances for over two centuries (say 1796-1810 upto today). However such homeopathic preparations are not just dilutions, they through a process of rhythmic dynamization which is key to their functioning.

A potency is prepared by diluting a gram of a substance in 9 grammes of water, making 10 grammes of 10% solution. That solution is rhythmically shaken for a few minutes, whereby length and shaking rhythm are important. This is now the first potency. The same process is now followed by diluting the above first potency and processing it to get the second potency. And so on. A third potency would be denoted by D3, a dilution of 10^-3. Such potency however is not just a diluted solution, as shown experimentally by experiments since 1923 (see below).

Potentization is the awakening of the etheric formative forces in earthly substances through a process of dilution and dynamization.

Earthly substances have formed through an evolutionary process whereby spiritual seeds took on a form and astral and physical clothing through formative forces as they descended from higher planes down to the physical plane. Physical matter is a crystallization of a spiritual idea-substance via a macrocosmic process of densification.

When we take some physical substance, we take the mineral element. It is the fixed, rigid form of that substance, as a result of a cosmic process of formation. However the essence of any element can exist in seven forms (see the spectrum of the kingdoms and ethers). We distinguish the ponderable (material, governed by centric forces) and imponderable (etheric, governed by universal or peripheral forces). The point is that as the substance gets led back from solid to fluid to gaseous to warmth it goes into another domain, the etheric, where different types of forces are working.

Schema FMC00.006 below illustrates, starting lower left. The earth has gone through a number of Conditions of Life (CoL), and we have arrived in the current fourth (CoL) and the fourth and lowest Condition of Form (CoF) through three earlier stages CoF (above left). Each Condition of Form saw the appearance of pairs of elements and ethers. In the current physical Condition of Form we can therefore find a substance along a spectrum of seven 'form appearances'. See more on Three dimensions of evolution.

Note the physical substances considered here are part of the physical Condition of Form, as put in perspective by Schema FMC00.006A on Spectrum of elements and ethers 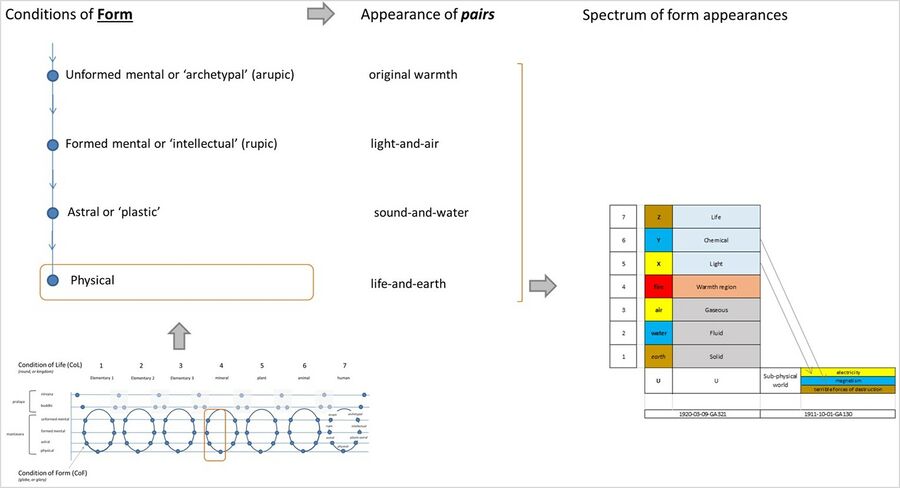 Potentization is a process to bring a substance back to these other and earlier stages of form appearance. As substance is a bearer of etheric forces of which the origin is peripheral (ai formative forces), the effect will be enhanced not by concentration but by expansion, for it is the rhythmic sequence of dilutions and successions or trituration which renders the potency effective.

Potentization is a process to bring a substance back to these other and earlier stages of form appearance. As substance is a bearer of etheric forces of which the origin is peripheral (ai formative forces), the effect will be enhanced not by concentration but by expansion, for it is the rhythmic sequence of dilutions and successions or trituration which renders the potency effective.

In the potentized substances, a new force is at work which is aroused by rhythm. With increasing dilution substance disappears first physically then chemically and spectroscopically, while biological activity is increasingly enhanced through the invisible spiritual workings of the substance.

This is not an alone-standing fact that should surprise us, as earthly matter can appear and disappear in cosmic rhythms, as shown on the page on transmutation. And also in the yearly plant growth, we see a similar process of metamorphosis and a rhythmic oscillation between material condensation and etherization into an impondarable state of being.

The potentization process can be seen as an inspired emulation of the process we find in nature, as the substance is etherized by rhythmical dilution, and the physical form of the substance changed from solid to liquid to gas and passes over into more refined non-material conditions.

In 1923, Lily Kolisko accomplished the first set of experiments to show the effects of potencies on the growth proces of plants. Many people replicated these (or did similar) experiments, and confirmed the findings. An overview is given in reference [1] below, which also includes a copy of the original study. Amongst other sources were Theodor Schwenk in 1954 [3] as well as Wilhelm Pelikan and Georg Unger in 1965 [5]. In fact so many publications can be found that I'm not sure if there exists a complete and exhausive overview, see eg the experimental results shown by Rudolf Hauscha in 'The Nature of Substance'. Note: the infamous and much debated experiments published by Jacques Benviste in Nature in 1988 are discussed in [1]. This is also put in perspective on the page on worldview wars.

The experimental method consists in planting grains in a series of (eg 30 or 50) pots, watering the pots with one of a continuous series of potencies of a given substance, letting the grains germinate and grow, and measuring the seedlings in terms of leaf and root. The average heights reached with each potency are then calculated and plotted to deliver the potency curves for a given substance. 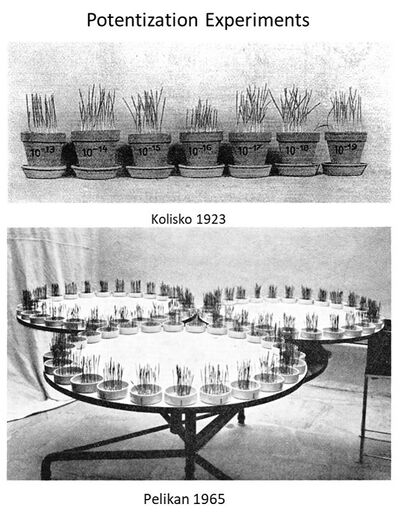 Schema FMC00.012 below shows examples of such curves. 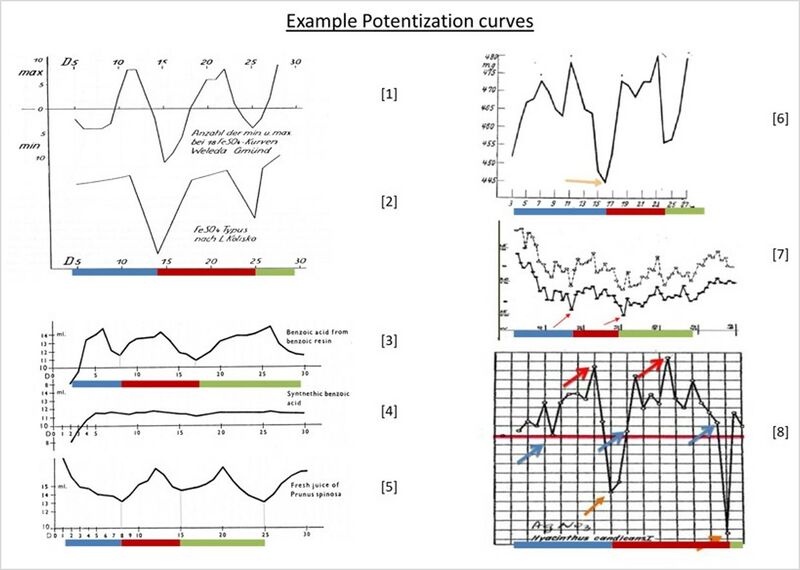 Potentization curves and their explanation

As Rudolf Steiner explains in 1920-03-31-GA312, in fact this was the trigger for the experiments that confirmed this:

Increase potency and you will reach a zero point; beyond that point opposite effects appear. But this is not all; the further path on the negative side leads to another zero point for these opposite effects. Passing the second zero, you will come to a higher form of efficiency tending in the same direction as the first sequence, but of quite a different nature.

In the above example curves therefore, the regions delineated by the minima have been highlighted with coloured zones.

Lili Kolisko refers to conversations with Rudolf Steiner (letter to Hans Kruger 1961-11-06) whereby he made the analogy of the different areas along the potentization axis with the effect of the metabolism, rhythmic subsystem, and nerve-sense system, saying:

Kolisko then continues to make the analogy with the workings of the hierarchies in Man - probably remembering 1924-05-18-GA236, and how one can imagine overlapping bell-curves with the effect of the third hierarchy on Man upto age 21, followed by the second hierarchy working between ages 21 and 42, and the first hierarchy between ages 42 and 63, however with the second hierarchy already starting at age 14 and overlapping, similarly the third already starting at age 35 and overlapping. From this she puts forth the idea that there are three areas where the impact of potency is predominantly one of the three subsystems (one can imagine three overlapping bell-curves - for the three subsystems - on the potency curve).

Contemplating that upto 14 years Man develops the etheric bodily principle, and then age of puberty is when the workings of the astral body starts, we are indeed reminded of 1924-07-21-GA319:

[4] - George Adams: 'Potentization and the peripheral forces of nature' (lecture, 1961)

[6] - Iwer Thor Lorenzen: 'Evolution through Incarnation and metamorphosis' (1969), Part III - About the Evolution of Earth and the Plant World.

Note: Lorenzen’s books were translated by the FMC project and are awaiting publishing.