This topic page covers one particular way of sketching the basic foundation underlying the spiritual scientific worldview with a specific language, through one angle of perspective. It was described in about five lectures by Rudolf Steiner in Sep 1906 and only published in 2018 in GA091.

Creation, evolution, and all we know around us, is described in a conceptual representation based on the abstract prime concepts of substance and force arise from Unity and The three Logoi - see Schema FMC00.171 below.

This gives rise to creation and the Three dimensions of evolution, see also Creation by the three logoi.

Substance and force are used to describe and explain, or elucidate, the 'spectrum of spiritual substance and force' that lies behind the 'coarse' matter and forces that we know in the physical world around us. In that sense it links to and represents a conceptual extension of the spectrum of elements and ethers.

Schema FMC00.171 starts with Unity, God, the divine Primal sea from which everything arises. It describes The three Logoi and Creation by the three logoi. 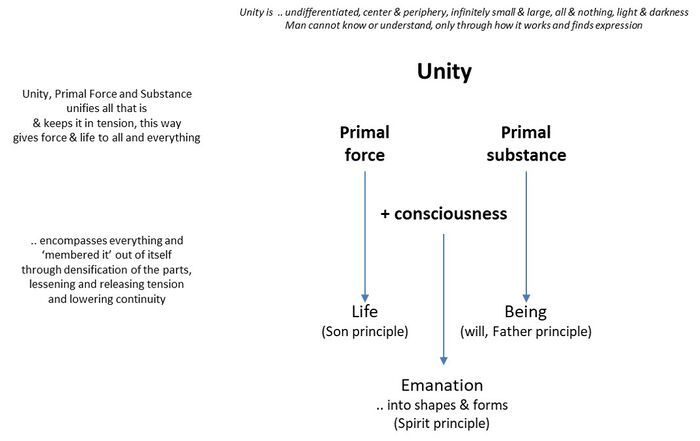 Schema FMC00.170 sketches the polarity between 'center and periphery' and 'pralaya and mantavara', see Cosmic breathing and especially the Cosmic breath of Brahma which denotes the same, the highest level of in- and out-breathing that gives rise to all of creation.

Schema FMC00.172A introduces the duality of force and substance. Earthly Man distinguishes these as two different concepts with different qualities, but they are two extremes of a continuous spectrum and appear as two sides of the same primal force/substance emanation. 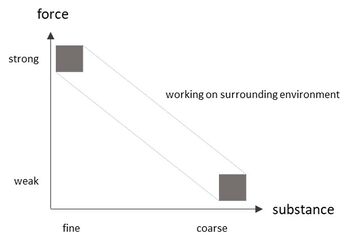 Schema FMC00.172 elaborates on the simpler FMC00.172A above. It shows how on physical Earth, coarse substance is 'Matter', and fine substance becomes 'Force', in the language of physics in mineral science. However between coarse substance (atoms) is the fine substance (ethers, force), and both form a balance that sustains itself, a bit like an extension of the phase diagram in chemistry. 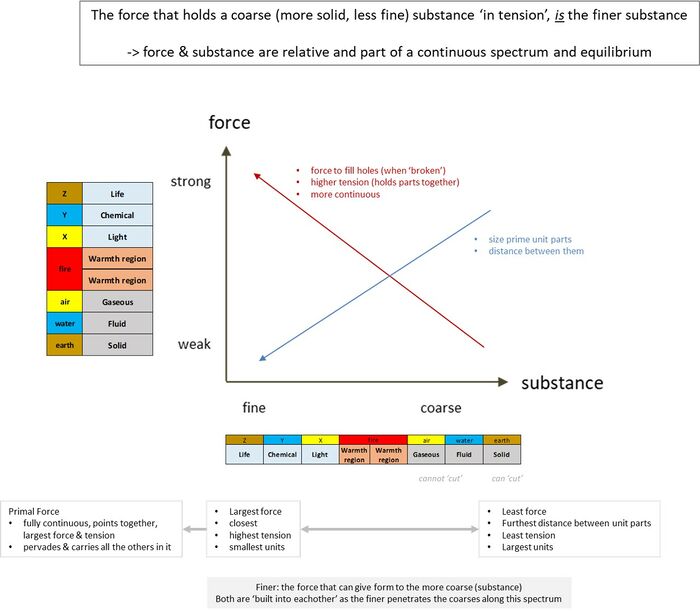 Schema FMC00.173 maps the earthly kingdoms of nature to this in terms of their deepest characteristics, and how they are relevant symbolic inspiration for Man in the whole. For the Last Supper symbolism, see Christ Module 5 - initiation and spiritualization, for the plant symbolism see Christ Module 4 - principle in image and story, oa how the symbol of the chaste plant was used in the Ancient Mysteries.

Schema FMC00.174 projects Man into this framework, and links to Man's transformation and spiritualization 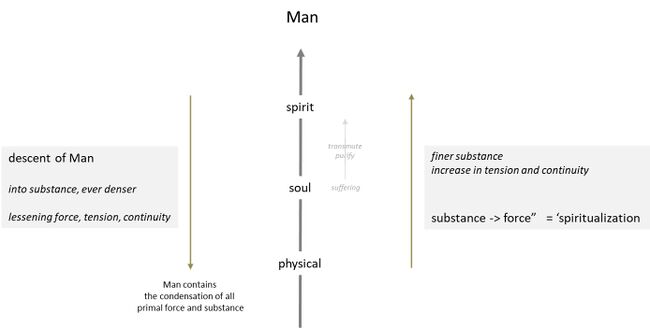 An original way to - in our minds - connect the idea of the Logoi to imaginative pictures from the etheric peripheral forces (based on projective geometry), is given in 1906-09-18-GA091 and 1906-09-19-GA091. This descriptive header title is a bit strange, but this is a very worthwhile sketch to study. Mainly because it offers the bridge to the 1905-08-07-GA091 (and 1905-08-08-GA091), and together these lectures give a unique framework for our thoughts on the forces of nature (eg gravitation).

Note that Rudolf Steiner uses the above representaton of framework when describing the atom, the heart, the earth at the crossing of the cosmic currents and physical matter, see lectures of 1906-09-20/21/22/30-GA091. They also bridge to esoteric geometry and numerology.