Creation by the three Logoi

With reference to schema FMC00.067 below (see also: Cosmic breath of Brahma), The three Logoi have three outpourings: 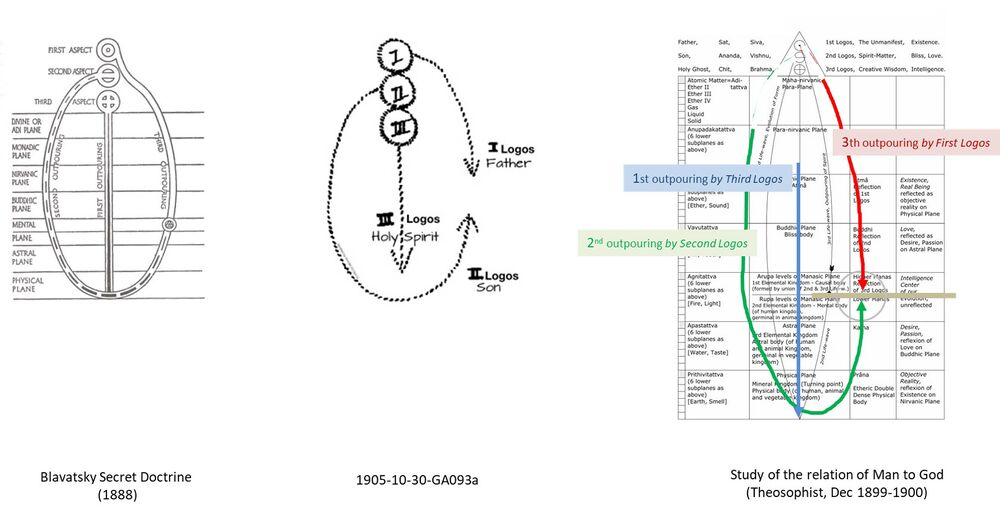 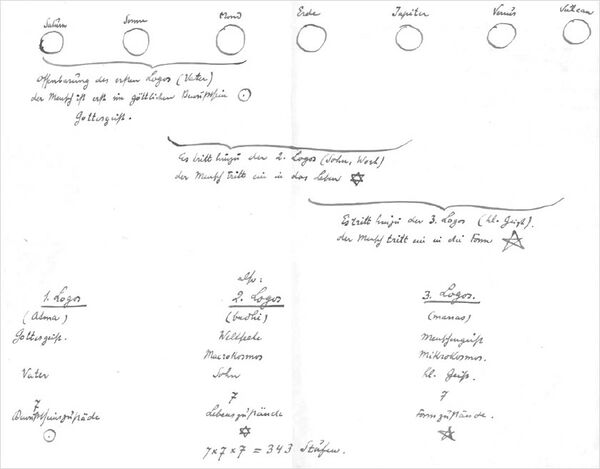 Schema FMC00.010A is the english digital version of the original FMC00.010, and links the Three Logoi to the Three dimensions of evolution. 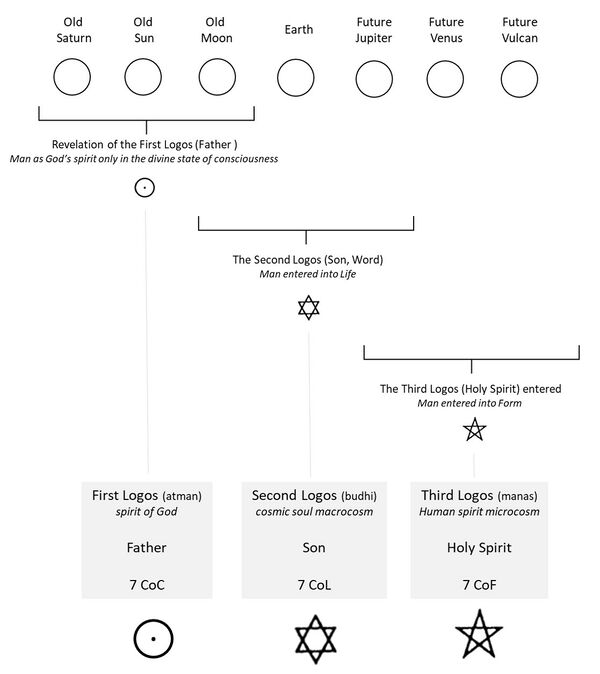 Schema FMC00.077B is a simplified variant of FMC00.077A to highlighting the 'moving up the ladder' in context of IAO and in purple the three highest states of the three Logoi For more info, see Creation of solar system.

Schema FMC00.062 depicts the spiritual entities involved in creation of cosmic systems like our solar system. Our solar system is described as everything upto the spirit world, with the spiritual hierarchies involved in a great dynamic interaction as explained in the Golden Chain. The spirits described in this schema are above that, and operate from nirvana and buddhi planes, orchestrating the changes at the highest level including transitions between the stages of consciousness (CoC), conditions of life (CoL) and conditions of form (CoF).

Note: The evolutionary dynamic is ongoing at all times for all hierarchies simultaneously and in parallel. In terms of the specific guidance for the development of humanity, it is also from these higher planes (buddhi and nirvana planes), that the White Lodge circle of Boddhisatvas and Buddha's operate and guide the evolution of Mankind, guided by the Christ, see the Occult atom.

Schema FMC00.062 shows the main creative entities at the highest level (as per GA089):

Schema FMC00.303 is a meta schema for purposes of study and contemplation

The best way into this subject matter is to read a number of lectures in the descriptive story they unfold:

This conceptual representation starts with a few abstract prime concepts of substanc and force that are used to 'explain', or let us see, the 'spectrum of spiritual substance and force' that lies behind the 'coarse' matter and forces that we know in the physical world around us. In that sense it links to and represents a conceptual extension of the spectrum of elements and ethers.

The three Logoi and threefold origin of Man

Why does the outpouring of the Logos go to the spirit world (mental plane or devachan)? The answer lies in the explanation of the wheel of planes, see Planes or Worlds of Consciousness

Schema FMC00.067 depicts the three outpourings by the logoi in a sequence: first the Third Logos, then the Second, and last and third the First Logos. This in line with Schema FMC00.064.

Now compare with Schema FMC00.010A above: here a sequence of First, Second and Third Logos is given along the seven planetary stages.

This seemingly offers a contradiction.

The following approach is proposed: to concurrently contemplate three perspectives:

1/ See Schema FMC00.171. The explanation of the Force Substance representation above describes how Consciousness arises as the wanted, the result from the will and life, from substance and force.

3/ On Three dimensions of evolution: contemplate Consciousness, Life and Form as per Schema FMC00.057 (and Schema FMC00.093), merging it with the above.

Schema FMC00.062 above triggers the question how this links to the spiritual hierarchies and specifically the First Hierarchy consisting of Seraphim, Cherubim and Thrones. The answer is given by a combination of 1909-04-GA110 with schema FMC00.077A.