Every planetary chain has twelve guiding spirits, acknowledged as regents in symbols such as the zodiac, with the sun moving through them.

The spiritual influences coming from the twelve zodiac signs can be studied from various angles:

Schema FMC00.071 depicts the rotation schedule between the twelve guiding spirits, whereby the division of seven and five is explained in 1909-08-31-GA113 (see extract below). See also: Zodiac streams: seven and five 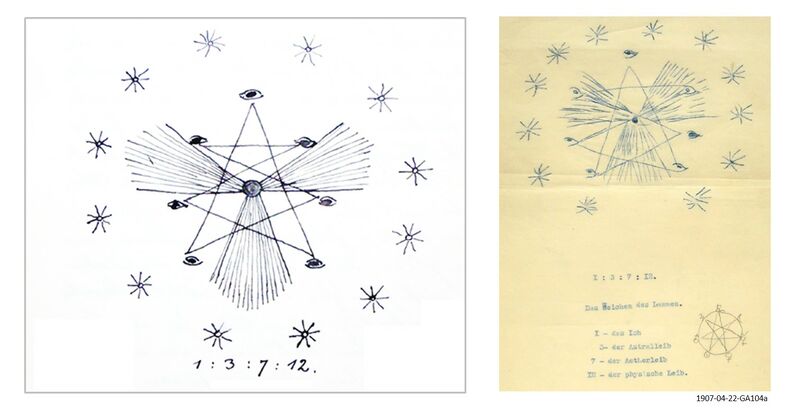 But there is also an inner relationship of space and time which I can only indicate here in bare outline with which the numbers twelve and seven have something to do. And my illustration shall be made as was usual in the mysteries when the relations of twelve to seven in the cosmos was being portrayed. It has been said that if we do not consider universal space in an abstract sense, but really relate earth conditions to universal space, we must refer those earth conditions to the circle described by the twelve essential points of the Zodiac, viz. Aries, Taurus, Gemini, Cancer, Leo, Virgo, Libra, Scorpio, Sagittarius, Capricorn, Aquarius, Pisces.

These twelve points of the Zodiac were not alone the real and veritable world symbols for the very oldest divine spiritual beings, but the symbols themselves were thought to correspond, in a certain sense, with reality.

Even when the earth was embodied as old Saturn, the forces issuing from these twelve directions were at work upon that ancient planet; so they were later on the old Sun, and on the old Moon, and are now and will continue to be in the future. Therefore they have as it were the nature of permanence, they are far more sublime than that which arises and passes away within our earth existence. That which is symbolised by the twelve signs of the Zodiac is infinitely higher than that which is transformed in the evolutionary course of our planet from old Saturn to old Sun and from that to old Moon and so on. Planetary existence arises and passes away, but the Zodiac is ever there. What is symbolised by the points of the Zodiac is more sublime than what upon our earth plays its part as the opposition between good and evil.

But now let us conceive that which becomes our earth beginning to be active. That can only happen by a division as it were coming to pass in the permanent deities and that which takes place entering into a different relation to these gods of permanence, who are divided into two spheres, into a sphere of good and a sphere of evil. ..

Let us think of this spread among seven planets. In truth, all seven are present, but one of them always has the power (the others hold lesser offices). If we take the fourth orb, it is ours. The device for us is therefore: The Father principle veils itself in the Word and reveals itself to the Spirit. And that is Christianity. With this Cherub we have the key word and hence also the meaning of Christianity.