Rhythm of a day

The Earth has a natural rhythm of a year in its relationship with the Sun, but it also turns around its axis in one day. This daily rhythm can be studied to be an etheric breathing process of the earth organism. It causes a natural day-night rhythm for nature and Man, but also affects rhythm in the other plant and animal kingdoms. 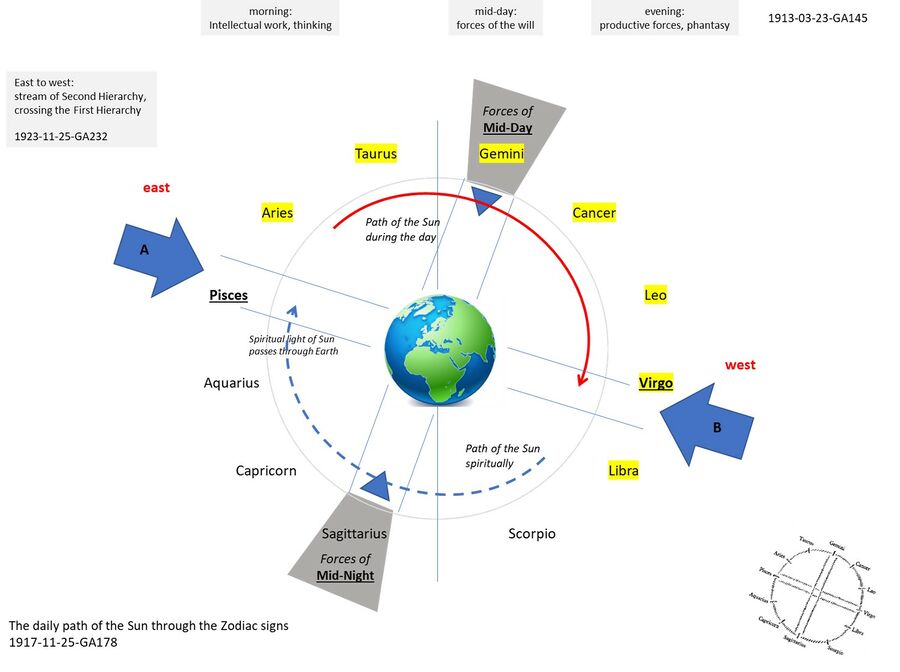 The daily rhythm of the Earth being

Goethe made extraordinarily numerous observations on the weather, in the course of one year. He made observations on the weather particularly in connection with the heights of the barometer, and it is really surprising to see the great number of charts which Goethe drew up for meteorological purposes. Not many of these charts have been published, some of these have been reproduced in my edition, but very little of this material has been published. Just as fever curves are now registered, so Goethe registered the barometrical heights of one particular place, indeed, of several places, upon charts, by marking the barometrical heights on one particular day. He then observed them a few hours later, again a few hours later, and so forth. He did this for whole months, and thus endeavoured to discover the corresponding curves for various localities.

Modern science has not yet advanced very far in the handling of barometrical curves. Goethe studied these curves, for he saw in them almost an analogue of the pulse which is registered on fever charts; that is to say, he wished to trace a kind of pulse of the earth, its constant regular pulse, of course. What did Goethe really aim at? — He wished to prove that the oscillations of the barometrical heights in the course of one year are not so irregular as ordinary meteorology assumes them to be, but that they contain a certain regularity, which is merely modified by inferior time-conditions. Goethe wished to prove that the gravitation of the earth represents its respiration, in the course of one year; he wished to indicate the very thing which also comes to expression in the human respiration. That is what he wished to re-discover in the barometrical heights. In future, THESE kinds of scientific observations will arise, for the microcosmic and the macrocosmic processes will once more be investigated. Goethe drew up quite a number of charts, in order to study the pulse of the earth, its respiration, the breath of the earth which goes in and out, as he himself designated it.

Also in this connection you may therefore see that in Goethe we may find an endeavour to work in the direction of a science which will only arise in future. At the same time, we obtain a picture of the enormous diligence applied by Goethe; in order to reach the results which he actually did reach. In Goethe, we never discover mere statements, as is so frequently the case in other people. When others frequently speak of the pulse of the earth, they merely have in mind an image, a metaphor, and this is nothing but an aperçu for them. But when Goethe advances a statement, which he often recapitulates in three or four sentences ... for instance, when he says that the earth breathes in and out ... then he always draws up quite a number of tables and charts upon which he bases his statements, and there is always real experience behind them, whereas the majority of people say: “Real experience! This is but an echo, a fog!” Goethe in particular may show us that it is necessary to have something behind us whenever we advance a statement.

Also in this way, we may therefore reach the point of recognising that the earth itself breathes just as if it were a great living being.

in 1917-11-25-GA178 is described how the forces of Pisces and Virgo have a impact on doing Good, whereas adverse forces will - in the future - try to use the mid-night forces of Sagittarius.

From a certain direction in the heavens, spiritual beings are continually active, and they have only to be put into the service of the earth, and — because these beings working in from the cosmos can mediate the secret of the earth's magnetism — it will be possible for egotistic groups to get behind this secret and to accomplish a great deal in connection with gold, health and the prolongation of life. It will be necessary for them only to pluck up their faltering courage — and in certain circles that will be done readily enough!

From the East an endeavour will be made to strengthen what I have already explained: to place in the service of the earth the beings which work in from the opposite side of the cosmos. In the future there will be a great battle.

.. It will be the task of good, healing science to find certain cosmic forces which can reach the earth through the co-operation of two cosmic streams, those of Pisces and Virgo. The great secret to be discovered will be how the influence which works from the direction of Pisces as a power of the sun unites itself with the influence working from the direction of Virgo. It will make for good when it is learnt how the morning and evening forces from the two sides of the cosmos can be brought into the service of humanity.

These forces, however, will be left aside by those who try to achieve their whole purpose through the polaric duality of positive and negative forces. The forces which enable the spiritual to stream down to earth with the aid of positive and negative magnetism come from Gemini; they are the midday forces. In ancient times it was known that cosmic influences were involved in this, and to-day even exoteric scientists are aware that in some or other way positive and negative magnetism lie behind Gemini in the Zodiac. The aim will be to paralyse all that could be gained through a revelation of the true duality in the cosmos — to paralyse it in a materialistic, egotistic way by means of the forces which stream in particularly from Gemini and can be placed entirely at the service of the human “Double.”

Other brotherhoods, concerned above all to divert attention from the Mystery of Golgotha, will try to make use of the duality in human nature — the duality which in our epoch embraces man as a unity, but includes within him his lower animal nature. A human being is really a centaur in a certain sense: his humanity rests on his lower animal nature in its astral form. This working together of the duality in man gives rise to a duality of forces. This duality of forces will be utilised particularly by certain egotistic brotherhoods, chiefly from the side of India and the East, in order to mislead eastern Europe, whose task it is to prepare for the sixth post-Atlantean epoch. And this will be done with the aid of the forces which work in from Sagittarius.

.. When the forces of Pisces and Virgo act in co-operation, nothing wrongful can be brought into being. ..

.. But from the other side many endeavours will be made to introduce the dead into human existence by artificial means. Along the indirect path through Gemini the dead will be led into human life, with the result that human vibrations will pass over into the mechanism of machines and will continue to vibrate there in a quite definite way. The cosmos will impart motion to the machines by the indirect path I have indicated.

In 1913-03-23-GA145 (SWCC) the effect of the day rhythm is described and it is described how in the future humanity will take this into account in order to organize activities, eg in eduction.

When a man goes through spiritual development, he experiences another stream of events in time in the course of the day. Indeed the Sun and Spirits of the yearly course also work with lesser forces in the course of the day. Someone who has done spiritual development will find that the relationship between his etheric body and the external ether cause his attitude towards the Spirits of the morning, the Spirits of mid-day and those of evening to be differentiated.

The Spirits of the morning so affect us that we feel stimulated in our etheric body to an activity which inclines more to the intellect, to the reason, which can think over what has been experienced, which can work more with the judgment upon what has been observed and still remains in the memory.

As mid-day approaches, these powers of judgment gradually decline; a man then feels impulses of the will more active inwardly. Even though towards mid-day the student begins to be less capable of work as regards his external forces than he was in the morning, yet inwardly the forces of his will are more active. And towards evening there come the productive forces which are connected more with fancy. Thus the Spiritual beings who send their forces into the conditions of the life-ether of the earth differ as regards the duties they have to perform.