This is an interim draft page for the development of the subject matter and study topics.

It provides a temporary jump-page to the various aspects that will be developed:

Schema FMC00.142 (see below) variants A to D (pictograms) are explained in various sections

Schema FMC00.141 is shows how, on the one hand (blue arrow down), the flow from the nirvana and budhi planes down to the three worlds below, sustains the emanation of thoughts created by the spiritual hierarchies in earlier stages. This is all we see around us, eg nature's kingdoms including ourselves. The spiritual hierarchies live in and evolve through this whole creation. On the other hand (blue arrow up), Man also creates through his thoughts, just as previous hierarchies did on previous planetary stages. Hence the human being becomes creator and contributor to future worlds.

The pencil drawing on the left shows how living spiritual germs ripple down from the higher planes into the formless spirit world, get clothed into archetypes in lower spirit land, and embody with astral clothing and physical substance. In the middle is shown how Man's actions are inscribed into the akashic records. On the left is a paragraph with RSL quotes by Maximilian Rebholz (in his essay 'Durchgang').

The goal of this schema is to depict an idea, not to have a nice illustration. It brings together a number of perspectives and can be seen as a synthetic picture, or as a point of departure to study various aspects that come together. 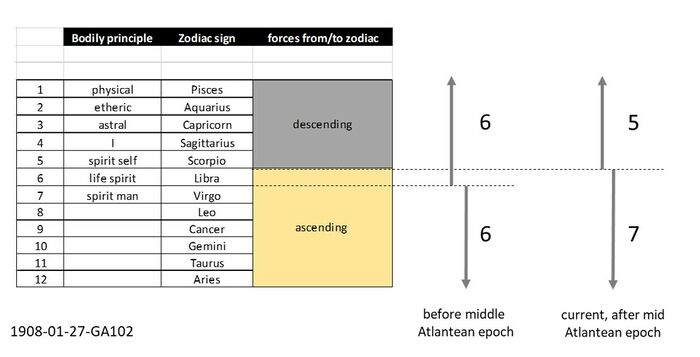 The landscape with many players - many interrelated spiritual entities

Schema FMC00.142 in full version below (simpler versions do not contain the various dimensions shown here). The schema shows the four kingdoms of nature, including their consciousness (group souls for the others besides Man), against the planes or worlds of consciousness (see Conditions of Consciousness). It also shows the three elementary kingdoms as the source of the formative forces, as well as the elementals below and how they are orchestrated by the third hierarchy of angels, archangels and archai. Furthermore it also shows the evolutionary dimension in overlay, the sacrifice of the higher hierarchies that gave rise to these new entities as an offspring during the previous planetary stages. 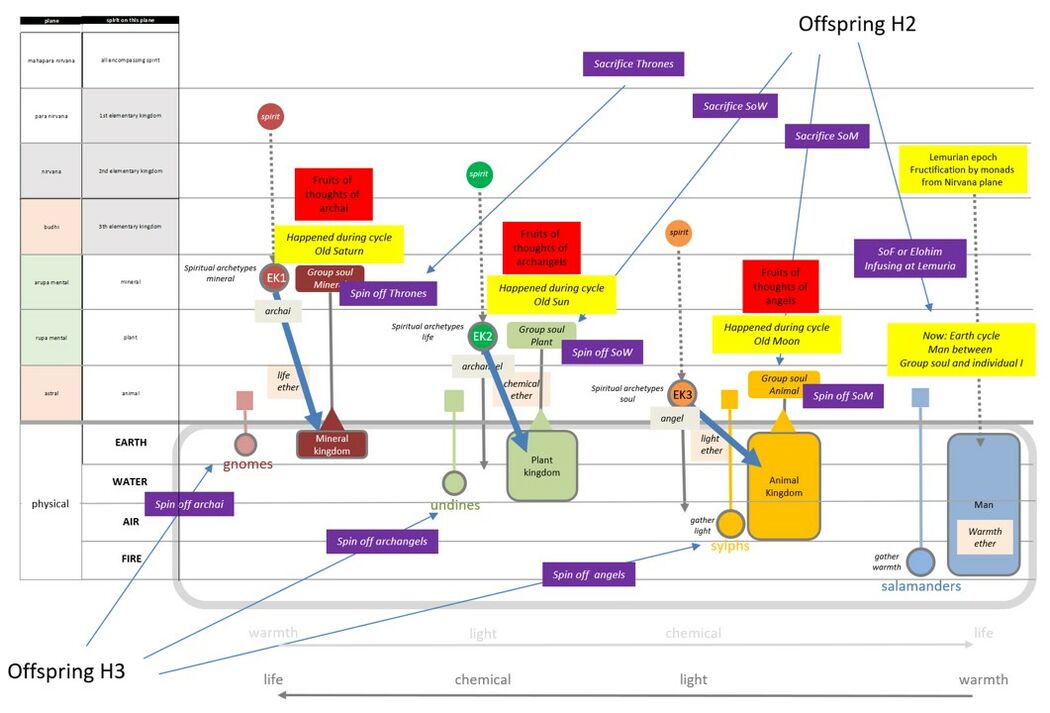 As we venture to cover and sketch and paint ‘the whole of creation’ around us, we will need to tread with patience and persistence, discipline and stamina. We will – necessarily - need many different angles of perspective to show how the various dimensions above hang together. The bar is set high: it is a challenge to try and convey this in a didactic manner. Meaning: the journey will be demanding, as only with sufficiently deep grasp of the above listed dimensions, and especially their interrelations, can we truly ‘see’.

The approach we propose is to sequentially approach our subject matter as follows:

- quick intro on the four above dimensions

o  we look around us: placing the kingdoms on the map to initialize our understanding (physical & consciousness, group souls)

o  what happens in the higher regions of spirit world: looking up to get a glimpse

§  later module: how this is linked to cosmic breath, three logoi, occult atom

3. - evolutionary perspective - in a second tour, going into more detail revisiting each .. now following the evolutionary sequence to view how the various kingdoms developed to their current form

o  the appearance of current kingdoms through the planetary evolutionary cycles, with addition of principles

o  how ‘offsprings’ appear, how elementals appear as part of this process

o  the appearance of elements and ethers through this process

o  the continuous dynamic of all spiritual entities involved

Man special attention: the charts with 3 systems and H3-2-1?

Were do the 3 subsystems come from?

-         buckets interchanging, up and down: the cosmic lamb lecture + angels in astral body, food

o  what’s next, after descent now ascent process (and why you’d better do your best if you want to be on the bus ;))

It’s a pity we have to divide it up like this, and my sincere hope is that, after all is said and done and you have done the whole tour to your own satisfaction .. you will be able to ‘see’ in one integrated imagination how it all hangs together. Not limited by the fragmentation and boundaries of thinking and languages.

That being said, it is normal that this can only be a process of gradual study, deepening, and building a new understanding. Only when you are driven to know, and you have an inner fire, will you remain motivated in your quest to dig deeper and build your own grasp on this matter. The nature of the aim is such it can not be passed on a piece of paper or in a single simple lecture. Not simple because it is not: reality is vastly complex. And not a single or a few lectures, because we need to build up a new framework for our thinking in this new spiritual scientific worldview. We can not take this in ‘as is’, because we are not ready and equipped for it, we cannot just fit this in into the physical-materialistic worldview we are taught and grow up in. In fact, we need to change ourselves.

The FMC areas, taken together, make up a foundation for a spiritual scientific worldview. However, rather than approaching it through the many logical chapters and building it up that way, this prototype website is presented as a nicer way to build one’s understanding. We will tap from these FMC areas, and at any point one can branch out of the Golden Chain storyline and connect into the FMC repository for more a more in depth coverage.