Spiritual beings develop at the highest level along the threads corresponding with the outstreaming of the three Logoi, and can be grouped in three categories with regards to the characteristics of the Condition of Consciousness (CoC) that they display.

The first seven correspond to the process that Mankind or humanity develops along the seven planetary stages of our solar system. However, when asking what happens then, or how a solar system like our current comes into being, we need to consider the higher stages. These higher stages have the characteristic of the logos: sacrifice of one's own being substance out of pure spiritual love. This at the same time is an act of creation of something higher.

For Man as for other spiritual beings the CoC is a representative indicator for the type of conscious awareness. The corresponding environment or world is denoted with terminology of planes (originating from theosophy).

With CoC4 is made reference to what Rudolf Steiner called the 'human stage', see Condition of Consciousness level 4 on Schema FMC00.048 below (which is the waking consciousness stage for humanity on the current Earth stage of evolution), that one find in red on FMC00.077A.

Schema FMC00.048 gives a reference table for the evolution of Man along the different states of Conditions of Consciousness (CoC). 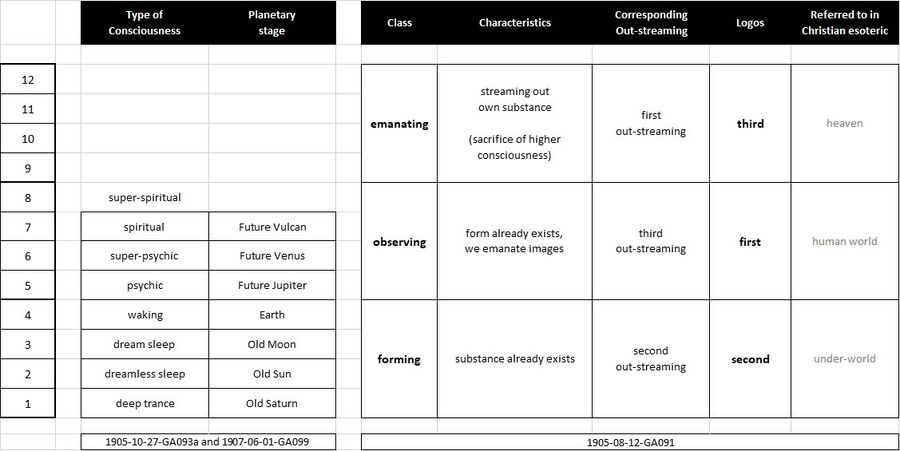 Schema FMC00.077A shows how the various spiritual hierarchies 'rise up' along the CoC ladder per planetary stage of evolution. The nature of how each hierarchy goes through a given CoC is totally different though, depending on the constitution of that planetary stage. See also: Creation of solar system.

In most references only the seven first types of consciousness are discussed.

1905-08-11-GA091 makes the relationship between these Conditions of Consciousness and the spiritual hierarchies, and 1905-08-13-GA091 with how consciousness in Man is related with the I and nervous system and the ether body.

Most of anthroposophy and spiritual science focuses on the evolution of the solar system and the first seven states, and deliberately keeps anything beyond out of scope of communication. The higher five were covered in selected early lectures in the period 1903-1905, as they were part of the eastern Theosophy brought by H.P. Blavatsky and elucidated by Rudolf Steiner.