Vulcan refers to the future and seventh spiritual state of evolution of the solar system that is currently in the fourth planetary stage Earth.

Just as the planetary stages of evolution in spiritual science also appear as physical planets in the solar system today (as observed by physical senses and waking consciousness), by deducation also Vulcan supposedly refers to a planet that would be closest to the sun. Much debate has taken place regarding this 'undiscovered planet' and whether it was observed as a physical body, for example when transiting across the solar disk (as can be observed eg for Mercury), or whether it is a purely spiritual planetary sphere.

Helena Blavatsky referenced this 'invisible intra-Mercurial planet' in The Secret Doctrine (1888-1889) and Q&As about this. Some sources (Weston, 1908) state such planet was already known to Egypto-Chaldean astrologers.

Schema FMC00.406 is an illustration of a 19th century map of the solar system for use in schools and academies (1846) showing Vulcan as a planet with an orbit between Mercury and the Sun. 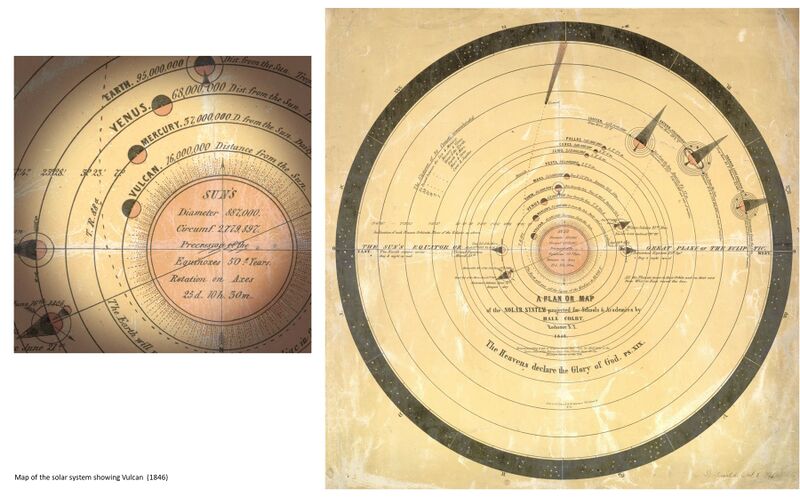 comments on Vulcan were discussed in the magazine 'Theosophia, A Living Philosophy For Humanity' (Vol 4, No 6 of 1948)

H.P. Blavatsky, writing in The Secret Doctrine on 'Planets, Rounds, and Man', stated:

"... we are told of the planets - of which seven only were held as sacred, as being ruled by the highest regents or gods, and not at all because the ancients knew nothing of the others ..." (Vol. I, p. 152)

To this a footnote was added:

"Many more planets are enumerated in the Secret Books than in modern astronomical works."

In various other places Madame Blavatsky referred to

These casual references to the subjectwere not enlarged upon until the following year, when in the 'Instruction Number Two' of the Esoteric School of Theosophy, she wrote:

"... the Sun is not a planet, but the central star of our system, and the Moon a dead planet, from which all the principles are gone, both being substitutes, the one for an invisible intra-Mercurial planet, and the other for a planet which seems to have now altogether disappeared from view."

A little further on in the same work, a footnote states:

"The planet for which the Sun is a substitute, was still nearer the Sun than Mercury now is, and was one of the most secret and highest planets. It is said to have become invisible at the close of the Third Race."

During the first half of 1889 [editor: 1888?] Madame Blavatsky was attending the Theosophical Lodge in London which bore her name, and answering many questions concerning statements which she had made in The Secret Doctrine. Among these questions was one requesting information about the planets for which the Sun and Moon were substitutes. She replied:

"There is no secret in it, though our modern astrologers are ignorant of these planets. One is an intra-Mercurial planet, which is supposed to have been discovered, and named by anticipation Vulcan, and the other a planet with a retrograde motion, sometimes visible at a certain hour of night and apparently near the moon. The occult influence of this planet is transmitted by the moon."

(Transactions of the Blavatsky Lodge, p. 48.)

extract of his 1908 publication (see 'Further reading' section below again taken from magazine 'Theosophia, A Living Philosophy For Humanity' (Vol 4, No 6 of 1948), link above)

"The selection of this name (Vulcan) was, as a matter of fact, due to a singular mythological story which gives an almost exact description of an inner planet. An intra-Mercurial planet is pretended to be hot, like a black-smith's iron, because it is close to the Sun, and Vulcan of mythology, or Tubal-Cain of the Bible, was feigned to be a black-smith, or all artisan engaged in the occupation of forging hot iron. Vulcan caught Mars, and made sport of him before Olympus, and we actually find some invisible planet near the Sun producing a detrimental effect on Mars. ... It seems possible, if not probable, that Vulcan was the true ancient name for the great intra-Mercurial planet, and that the attributes of the Vulcan of mythology correspond with the scientific effects of the intra-Mercurial planet of Chaldean Astrology."

Weston refers to Democritus, philosopher and astrologer of the third century B.C., as stating that "there were certain planets invisible and unknown to the commoner sort of observers of his day." He mentions the Jewish worship of an "invisible deity situated in a place too intensely light to gaze upon," and presents evidence to show that the Egyptians had knowledge of Vulcan, an intelligence which was possibly derived from the early Atlantean astrologers.

Regarding the customary invisibility of Vulcan at its calculated times of transit, Weston sets forth the hypothesis that the planet is a thin, flat disc of matter, instead of being a spheroid like the rest of the planets. As its axial rotation would place the thin edge of the disc toward the ecliptic, it would be extremely difficult to observe. Weston postulates that occasionally Vulcan captures masses of matter from Sun-circling comets, and this material, surrounding the planet in a globe of cloud-like matter, makes it visible during transit. When Vulcan next approaches the node, however, its high axial rotation will have by that time thrown off the cometary clouds, and its passage across the Sun will be unobservable.

Weston has calculated the rotational period of Vulcan around the Sun to be approximately nineteen days, and its mean distance from the Sun at 12,753,000 miles. Richard A. Proctor, a prominent British astronomer of the last century, calculated that Vulcan would transit the Sun at least once a year, and possibly oftener, depending on the inclination of its orbit.

It is possible, also, that Vulcan is beginning to emerge partially from the invisibility into which it passed at the time of the Third Root-Race. In this case, it will in the future be observed again, and finally may return to full view as one of the Sun's family of planets.

During the recapitulation of the Saturn embodiment, Uranus, Vulcan and Saturn separated from the Earth.

The transcript of the spoken lecture was edited and rephrased below in more condensed written text without changes to contents.

Since the 1870s, super-earthly Beings - not of the human order - have been descending (from the sphere lying between the Moon and Mercury) to the Earth for the purposes of their further development, and they enter into relationships with human beings. Just as the Vulcan-men were the last to come down to the Earth so now Vulcan beings are coming into the realm of earthly existence. They are coming down to the earthly slowly and by degrees, and ought to be willingly received.

In the course of the next centuries more and more spiritual beings will be among us — beings whose language we ought to understand. Vulcan beings, ‘Supermen’ of Vulcan, ‘Supermen’ of Venus, of Mercury, of the Sun, will will gradually come down to the Earth and unite with this earth-existence.

They desire nothing else than to be the advance-guards of what will happen to earth-existence when the moon is once again united with the earth. The fact there is already a body of spiritual science today is due to the fact that Beings from beyond the earth are bringing the messages from the spiritual world down into earth-existence.

The human race does not concern itself with them; it ignores their existence. If human beings persist to ignore and oppose to them, earth-existence will pass over into chaos in the course of the next few thousand years. Catastrophe after catastrophe must ensue, and earthly life will fall at length into social chaos, if opposition is maintained in human existence to the advent of these Beings.

quote B is literal

I repeat, then, that since the last third of the nineteenth century spiritual beings from the cosmos have been coming into our own sphere of existence. Their home is the sphere lying between the moon and Mercury, but they are already pressing forward into the realm of earth-existence and seeking to gain a foothold there. And they will be able to find it if human beings are imbued with the thought of their existence. This can also be expressed as I expressed it just now, by saying that our shadowy intellect must be quickened to life by the pictures of Spiritual Science. We are speaking of concrete fact when we say: spiritual beings are seeking to come down into earth-existence and ought to be willingly received. Catastrophe after catastrophe must ensue, and earthly life will fall at length into social chaos, if opposition is maintained in human existence to the advent of these beings. They desire nothing else than to be the advance-guards of what will happen to earth-existence when the moon is once again united with the earth.

The teaching with reference to that planet, the highest (in one sense) of our seven sacred planets, is this, that it became invisible to our physical senses at about the middle point of the third Root-Race [epoch]; but as we have now reached again, on the upward arc, the plane corresponding to the degree of plane-development of the Third Root-Race; in a relatively short cyclic period, it should begin again to show itself; but even today, while it might be generally invisible on account of what we may call its ethereality, if searched for by telescope it might nevertheless be seen, under favorable conditions, crossing the solar disk. And why? Because the truly indescribable brilliance of the sun throws anything that appears before it, into visibility, so to speak, as a darker body, and it could thus be seen as such a shadowy body crossing the solar disk.

also mentioned Vulcan in her written works between 1919-1949, mostly in 'Esoteric Astrology' but also in 'A Treatise on Cosmic Fire'

They could only 'come in' in the middle of the fifth round, and were a group of initiates who arrested their own evolution (technically speaking) in order to take up a special piece of work on the planet Vulcan; therefore, they must return to continue and complete that which has been left undone. Owing to the results of their experience on Vulcan, the physical vehicle necessitated is of such an order that they could not at this time, and in this round, incarnate without disaster.”

“Vulcan is within the orbit of Mercury.”

in 'The experience of eternity'

We know the solar system has a fixed number of live planets, and that a certain number of observers think that a minuscule celestial body turns around the Sun. According to them, its revolution around the Sun would take less than 20 days. If this were the case, the sun is birthing a planet already named Vulcan, planet of Fire. In ths case, the shift would be: Vulcan would replace Mercury, Mercury would replace Venus, Venus would replace the Earth, the Earth would replace Mars, Mars would replace Jupiter, Jupiter would replace Saturn, Saturn becomes a gaseous planet and finally disappears in the cosmos. This cycle evoked in ancient traditions is extremely slow and occurs in the span of millions of years.

As the sources above state:

The fact that some credible observers have seen Vulcan, and others not, can be compared with Venus' ashen light. For a survey of that topic, see ao