Waking consciousness refers to current humanity's predominant Condition of Consciousness (CoC) with perception of and thoughts about the mineral physical world during waking life. This in contrast with Man's state of sleep that goes hand in hand with this waking consciousness.

The current state of consciousness links and maps to the current evolutionary stage whereby Man develops from lower to higher CoC.

How does this Consciousness work in Man from a spiritual scientific perspective, and how does clairvoyant perception of the spiritual worlds differ from this mainstream waking consciousness?

We distinguish the Human 'I', which is a spiritual entity, from 'what call our I' with our current waking consciousness. The latter is a mirror reflection of our true spiritual I.

The 'I' we know and we call ourself, is not our true spiritual I but a reflected image in maya made up from the sum of all our experiences during an incarnation. Our true 'I' is an entity in the mental world, see also: the Human 'I' and Man's higher triad (eg Schemas FMC00.128 and FMC00.164).

Man’s waking consciousness today is through the I-organization in the lower bodies (sentient, intellectual and consciousness soul in astral, etheric and physical body), using the physical senses to experience the mineral-material reality, and the physical body and the Nerve-sense subsystem ('the head part in Man as a threefold being) as a reflector.

Man's current Waking Consciousness is to be seen in the framework of humanity's consciousness development and the process of individuation: from Group Souls to individual droplets of consciousness in the Lemurian epoch and upto the refined threefold soul in the current epoch (see also: Development of the I and Group souls of humanity), and the future conscious spiritualization of Man's lower bodies and the development of Man as a true spiritual being (see also: Man's transformation and spiritualization). This perspective shows how Man evolves his Condition of Consciousness from CoC level 1 to 7 throughout the planetary stages of evolution in the current solar system.

Schema FMC00.226 captures a few diagrams from various lectures. In common is the blue backbone of the spinal column and chakras. The lecture extracts are below. 1918-08-GA183 gives the most complete description.

Schema FMC00.229 provides the original illustrations from the Steiner archive manuscripts and typoscripts of 1918-08-19-GA183.

Schema FMC00.231 illustrates how we form inner experience of perception of the outer, and only perceive and store a small part in memory, see below for descriptive in lecture extract 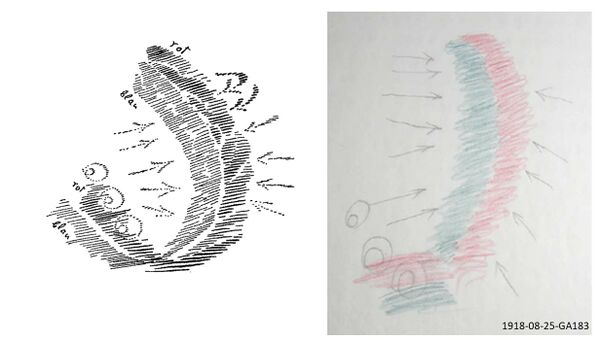 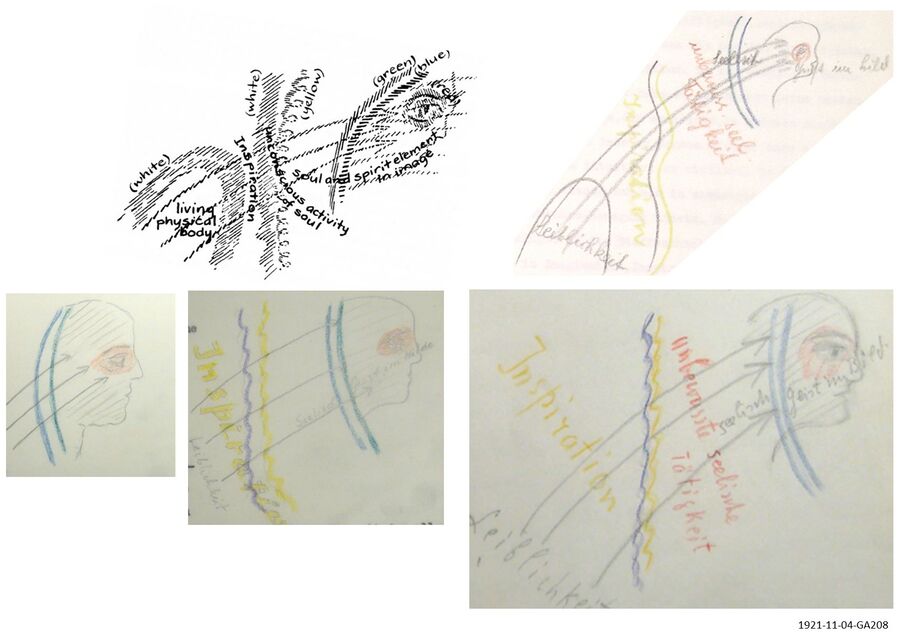 .. how does the I slips into the body? .. How is it that on waking we are suddenly surrounded with sense-perceptions, such as impressions of colour and light? For example, suppose the first sense-impression we have on waking is a blue surface, the colour blue. What is the explanation of this impression? Ordinary consciousness is completely at sea here.

Now reconsider .. that the “eye is formed by the light for the light” .. the eye is not formed by what is reflected, but by what comes to us with the light, and that is part of the Elementary World. Moreover something also streams in from the World of Spirit, indeed from all the worlds of which we have spoken. Accordingly we may say: At this particular point certain forces are held back by the eye, and also by the other senses; what does not stream into us, what is held back, is the sum-total of our sense-impressions. Thus it is what we do not let through that we see or hear; but what we do let through is what has formed the physical organism of the eye, for example. We hold back certain forces and allow certain others to pass through — these latter being forces of the Elementary World. If we look at the eyeball in a mirror, then too we see only what it does not let through. Thus in the Elementary World there are forces which have formed our sense of sight and also our other senses. As sense-beings we are formed out of the Elementary World; the world we see when we are able to look into the Elementary World is the world which builds up our senses.

At the inner “wall” of our organ of sight there is a kind of second mirror, for there, from a further world, other forces flow in — with the exception of those that are reflected. There the elemental forces themselves are held back and reflected; they cease to function and it is only the forces of the World of Spirit that stream through and are not reflected. These are the forces that form, for example, the optic nerve. Just as the eye has its optic nerve, so has the ear its aural nerves from the forces streaming in from the World of Spirit. From there stream the forces of Beings who are the builders of the whole nervous system. Our nerves are ordered according to the laws of the planetary world outside, for the planetary world is the outer expression of spiritual realities and spiritual worlds.

The lectures of 1914-10-03/4/5/6-GA156, and especially the last two, show how the etheric and physical bodies can used for inner reading and listening of the spiritual vowels and consonants. They explain incarnate clairvoyance whereby the astral senses (imagination, astral world) are used for inner reading of the cosmic wisdom of the solar system, using our own etheric and physical bodies as a reflector of the spiritual reality.

At the start of the first lecture of the series, Steiner mentions that due to the first world war, he can not bring the contents that was originally intended, but later he also mentions he will come back on this in later times.

.. you turn your senses outward, and you find the external world spread out as something perceptible. I will draw diagrammatically what lies around us outside as something spread out for the senses.

Allow this (see blue in diagram) to be what is lying outside. When you direct your eyes, your ears, your sense of smell, or whichever sense you like, to the external world, the inner side of this outside turns towards you, turns towards your senses Thus this is the inner side of the outside (see left of diagram). Suppose you turn your senses here to what I have drawn (see arrows). These are the senses directed towards the outer world and you see what here inside inclines within.

Now follows the difficult conception to which I have to come. Everything you look at there presents itself to you from inside. Imagine it must also have an outside. So I will call it up diagrammatically before your souls saying: When you look out thus you see the permanent as the limit of your vision; that is approximately so, only I have drawn it small. But now imagine you could quickly fly out there, fly beyond there and take a peep through from the other side and from the other side see your sense impressions. You could look out thus (see upper arrows in diagram). No, naturally you do not see this but, could you thus look at it, it would be the other aspect. You would have to go outside yourself, you would have to look from the other side at your whole perceptible world. You would see the reverse side of what meets you as color, what meets you as sound, and so on. You would see the reverse of what comes to you as smell, you would receive the smell in your nose from behind. Thus, imagine your view of the world from the other side; imagine the perceptible things spread out like a carpet, and now the carpet viewed from the other side.

You see only a little bit of this reverse side, a very little bit indeed. I can only represent this little bit by doing it like this. Imagine now that I am drawing in red what you would see from the other side, so that I can say, one sees the perceptible diagrammatically thus. To one's ordinary view it appears blue; seen from the other side it appears red (but naturally one does not see it.) In what you would see red, is hidden first that is experienced between death and a new birth; secondly, everything described in Occult Science as the evolutions of Old Saturn, Old Sun, Old Moon, Earth and so forth. Everything hidden from sense perception lies there stored up. There it is, on the other side of the sphere, but you see only a little bit.

I can indicate this best by saying: take this small bit of red; this goes over (see below in diagram) and crosses the blue, so that the blue instead of being, as now, in front, is behind. (were I to draw in accordance with reality, I should have to do so in four dimensions, so I can only keep to what is quite diagrammatic.) Thus the senses here are now turned to the blue (left); there they do not turn to the blue but to the red which moreover you do not see. Behind the red, however, there crosses what otherwise would be seen and that is now underneath. And this little bit that crosses the other there, you see continually with your ordinary consciousness. It is indeed your stored up memories. What arises as memory does not arise in accordance with the laws of the outer world of the senses but according to laws suitable to this world that is behind. What is within as your memories is what is suited to the other side (right). As you look within on all your memories you are actually looking at a bit of the world on the other side; the other projects inwards a little and then you see the world from the other side. And if now you could slip through your memories thus received (I spoke of this a week ago - see 1918-08-18-GA183) if you could get underneath and see below your memories, look at them from the other aide from down there (see right in diagram), you would see them as your aura, There you would see man as a being with a soul-spiritual aura just as ordinarily you look at the external world of sense perceptions. But as I showed you a week ago this would be hardly pleasant because man on this other side is not yet beautiful.

It considers the four bodily principles of Man with meaning from concrete reality experience.

And also leads to the image of the dragon biting its tail as the symbol of consciousness that exists of the two streams meeting: sensory perception (and presentations) by the I (and the astral body) on the one hand, and continuous upstreaming of stored images (and memories ) from the physical body (and the ether body) on the other.

1921-11-04-GA208 (see Schema FMC00.230) explains how the cosmic inspiration flows into our subconsciousness behind our conscious sensory perception.