Sense perception is usually related to our physical Human senses of sight, smell, sound, taste and touch; and is the basis for contemporary waking consciousness. Man has twelve senses in total and so only five are used by Man's current waking consciousness, the others are either 'below' in the subconscious, or 'above' and latent for future evolutionary development.

Considering fourfold Man, the process of seeing, hearing, smelling, tasting and touching is done by our I-consciousness using astral senses that utilize the facilities of our physical body (eg our eye or ear). Perception therefore needs to be considered as a spiritual process across the four bodily principles.

What the I experiences in daytime through the astral body and senses gets imprinted on the etheric and physical bodies during the night-time process. It is important to realize that these perceptions and experience with the waking consciousness of our physical mineral body do not represent our true spiritual 'I', but are just a reflection.

Higher perception, see Stages of clairvoyance, consists of holding back 'more', for example the forces which form the organs in man for Imaginative consciousness come from the buddhi plane (re the development of the lotus flowers or chakras). 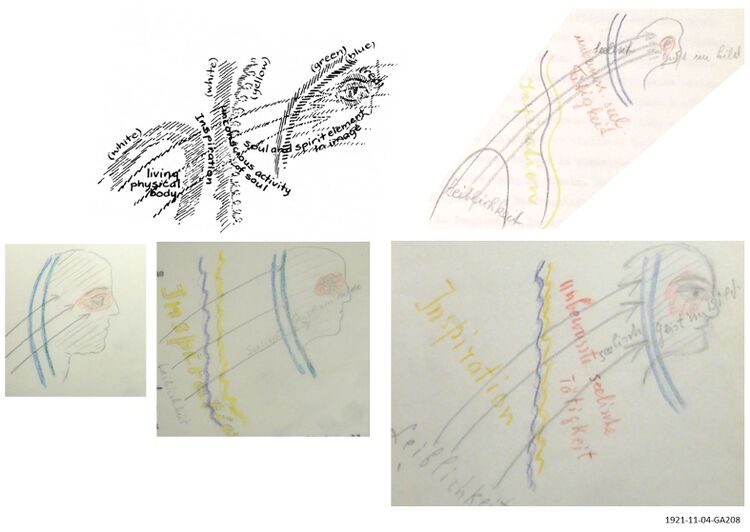 Schema FMC00.178 (see 1905-09-30-GA093A below) describes active and passive perception and links with the process of producing rather than perceiving. See also Etherization of blood (eg the quote from 1906-12-18-GA266/1 is on the pineal gland as it becomes an active organ) and Man past and future.

The next step is connected with warmth. Man's activity is to be sought in what streams out from him as inner warmth. Out of what proceeds from warmth: passions, impulses, instincts, desires, wishes and so on, Karma arises. The heart takes up the warmth from outside and thereby perceives world warmth.

One takes up the warmth of the world in the heart and lets it stream forth again through the pituitary gland in the brain. Once this capacity has been achieved, the heart will have become the organ it was intended to be. There is a reference to this in words from ‘Light on the Path’: (22) ‘Before the soul can stand in the presence of the Masters, its feet must be washed in the blood of the heart.’ Then our heart's blood streams out as today our words stream out into the world. In the future, warmth of soul will flood over mankind.

Somewhat deeper in evolution than the warmth organ stands the organ of sight.

In the course of evolution the organs of hearing, warmth and sight, follow in sequence;

There is an organ which will also become the active organ of vision. This is today germinally present in the pineal gland, the epiphysis, the organ which will give reality to the images which today are produced by the eye.

These two organs, the pineal gland and the pituitary gland as active organs, must develop into the organ of vision (eye) and the organ of warmth (heart). Today fantasy is the preliminary stage leading to a later power of creation. Now man has at most imagination. Later he will have magical power. This is the Kriya-shakti power. It develops in proportion to the physical development of the pineal gland.

provides a good introduction for sense perception. We sense-perceive only the part of the elementals or spiritual streams that we hold back, the rest streams in (eg eye). And higher perception consists of holding back 'more'.

For example, suppose the first sense-impression we have on waking is a blue surface, the colour blue.

What is the explanation of this impression?

We can now supplement what was said in the previous lectures, that the 'eye is formed by the light for the light'.

That is to say, the eye is not formed by what is reflected, but by what comes to us with the light — and that is part of the astral world.

Moreover something also streams in from the lower spirit world [original text: World of Spirit], indeed from all the worlds of which we have spoken. Accordingly we may say: At this particular point certain forces are held back by the eye, and also by the other senses; what does not stream into us, what is held back, is the sum-total of our sense-impressions.

● it is what we do not let through that we see or hear; but

● what we do let through is what has formed the physical organism of the eye, for example. We hold back certain forces and allow certain others to pass through — these latter being forces of the astral world.

If we look at the eyeball in a mirror, then too we see only what it does not let through. Thus in the astral world there are forces which have formed our sense of sight and also our other senses.

At the inner “wall” of our organ of sight there is a kind of second mirror, for there, from a further world, other forces flow in — with the exception of those that are reflected. There the elemental forces themselves are held back and reflected; they cease to function and it is only the forces of the lower spirit world that stream through and are not reflected. These are the forces that form, for example, the optic nerve. Just as the eye has its optic nerve, so has the ear its aural nerves from the forces streaming in from the lower spirit world. From there stream the forces of beings who are the builders of the whole nervous system. Our nerves are ordered according to the laws of the planetary world outside, for the planetary world is the outer expression of spiritual realities and spiritual worlds.

[Conscious awareness = a filter system, holding back part of the spiritual streams]

In what way are we able in ordinary life to be conscious of anything?

By being able to hold it back.

What does man know of the astral world?

As much as is mirrored for him by the senses: light, sounds, and so forth.

What does man know of the lower spirit world ?

Of what should we have to be capable if we desired to see more than what has been described here?

Now the Angeloi are active in sense perception and man's intellect is exposed to ahrimanic influences. After death the Angeloi are active in his intellect. There is no possibility for man to attain higher knowledge through processes of breathing. Since the Mystery of Golgotha the possibility exists to attain a higher consciousness by becoming aware of the Angeloi's activity in sense perception. Men can attain vision of the spiritual world through the Christ impulse.

The remarkable fact is that before the Mystery of Golgotha an intimate relation existed between the activity and being of the Angeloi and the human intellect.

After the Mystery of Golgotha this relationship gradually changed. So what relationship does man have now to the beings of the Hierarchy of the Angeloi?

Since Mog, Man is to attain a connection with the spiritual world through the development of a higher consciousness. If we were able to cognize; i.e. attain knowledge through our breath, then with every inhalation we would be conscious, not of inhaling air, but of taking in the force of Jahve; and with every exhalation we would know we exhaled Jahve. In a similar way man is now to become conscious that the beings of the Hierarchy of the Angeloi approach him and retreat from him rhythmically; that the spiritual world flows towards him and again ebbs away as it were. But man will attain this higher consciousness only if the impulse of the Mystery of Golgotha influences him more and more.

The processes of the eye have nothing to do with the inner truth of sight. The eye is simply turned on in the processes of seeing, and because it is 'turned on', the I is able to see through the process of sight. But the eye is absolutely not the thing that transmits or affects or does anything with the content in the process of seeing. It is simply the receiving device for the I. Paradoxically, we could say that our eye, as a sense organ, has nothing to do with sight, but everything to do with what our I has knowledge of sight. Sense organs such as the ones we currently possess are not there for seeing; they are there so that the I can know sight. I would like to write this sentence on the board: Higher sense organs are not there to transmit sense processes; they are there so that the I can know of sense processes.