Development of the chakras

The chakras or lotus flowers are Man's higher or astral senses. These spiritual sense-organs or higher organs of perception appear in the shape of spiritual flower-forms budding forth from man and are therefore called ‘lotus-flowers’, or also spiritual ‘wheels’ or ‘chakrams’.

Initiation or esoteric development enables these slowly through consistent practicing exercises for soul and spirit, which is part of the process (and more of a result) of Man's transformation and spiritualization. When all petals of a lotus flower are again fully enabled, the chakra starts to turn and this causes clairvoyance.

The third eye, throat and heart chakras link to Imagination, Inspiration and Intuition, or clairvoyance in the astral soul world and the lower and higher spirit worlds. 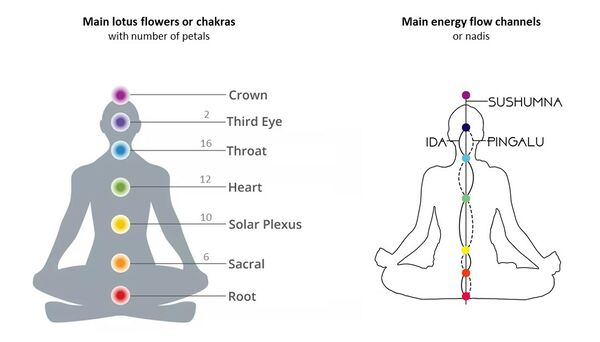 Schema FMC00.092 sketches the natural timeline of anticipated development of the throat chakra. Note the link with the twelve subraces or cultural ages represented by the twelve apostles, that end with the second cultural age of the sixth epoch. And 1906-10-04-GA091 describes this exact period for the Christ to come fully into power and humanity starts to understand Christ. 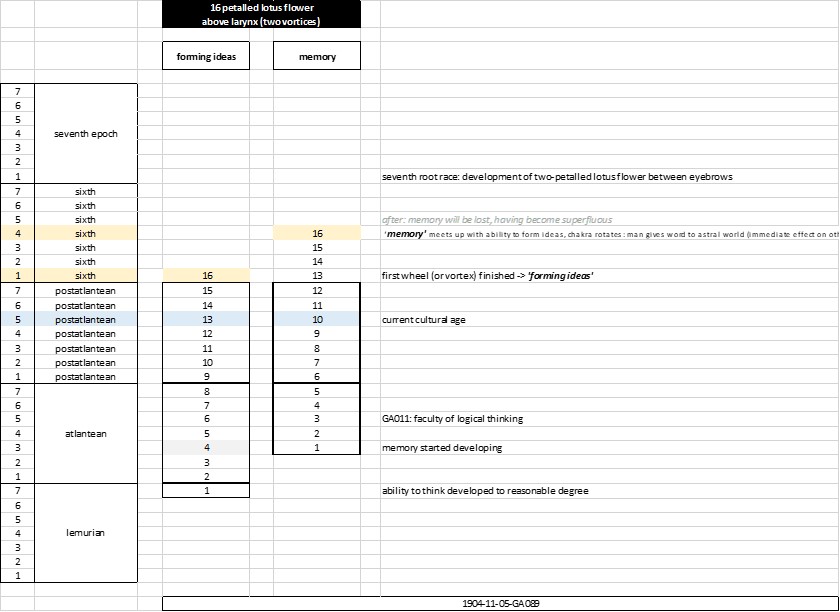 Schema FMC00.129 links the development of the chakras to the stages of clairvoyance as a result of developing the threefold soul or 'I'.

In 1904-11-05-GA089 the development of the throat and third eye chakras is linked to the sixth and sevent root races (see schema FMC00.092 above). And 1909-10-26-GA115 connects the three chakras to imagination (third eye), inspiration (throat), intuition (heart). One could maybe apply rational logic and expect a 'logical" sequencing of chakras to clairvoyant capabilities, and hence expect imaginative faculty to develop before inspiration. However see the 1913-03-29-GA145 quote on the Human 'I'. The first transformation of the lower bodies is working the astral body.

.. in order to awaken in the soul world, one must have sense organs for this soul world just as one has sense organs for the material world. Like the body possesses eyes and ears, the soul and the spirit must possess organs to perceive the radiance of the soul realm and the soundings of the world of spirit. A person with experience in this field, who is clairvoyant, can actually perceive the process of development of such soul organs in a person engaged in inner training. They are perceived in his aura enveloped in a cloud of light. The aura of a spiritually undeveloped person is seen like a nebulous cloud formation. When a person sleeps, the aura hovers above the physical body because the astral body separates in sleep from it.

The aura's appearance is that of two entwined spirals like rings of mist. They wind around one another and disappear in continuous spirals into indefinable realms. When a person undertakes occult training, his aura becomes increasingly definable. The indefinable ends of the spirals disappear and the two entwined spiral formations become clearly organized. They become increasingly defined, compact structures. Certain organs appear in the aura that are called chakrams in esoteric language. These are the sense organs of the soul. Their structure is delicate and in order to come into bloom they must be cared for and guarded. Under no other circumstances can they develop. He who rails in this will never enjoy true spiritual perception. A person must suppress all negative sensations and feelings within himself in order to nurture these soul eyes. The chakrams cannot emerge if a person becomes angry at every opportunity. Equanimity must be preserved, patience must be practiced. Anger and fury prohibit the soul eye's appearance; nervousness and haste will not permit its development.

The astral organs of perception are called the ‘lotus-flowers’ (sacred wheels, chakra). ...

The two-petalled lotus-flower beneath the forehead, at the root of the nose is as yet an undeveloped astral organ which will one day unfold into two antennae or wings. The symbol of them can already be seen in the horns traditionally represented on the head of Moses. ...

The lotus-flower with sixteen petals lies in the region of the larynx. In very ancient times this lotus-flower turned from right to left — that is to say in the opposite direction to the hands of a clock. In the man of today, this lotus-flower has ceased to turn. In the clairvoyant seer it begins to move in the opposite direction — from left to right. In earlier times, eight of the sixteen petals were visible, the others undeveloped. In future ages they will all be visible, for the first eight are the result of the action of unconscious initiation, the other eight of the conscious initiation attained by dint of personal effort. The eight new petals correspond to the Beatitudes of Christ.

The lotus-flower with twelve petals is situated in the region of the heart. In earlier times, six petals only were visible. The acquisition of six virtues will develop the other six in times to come. These six virtues are: control of thought, power of initiative, balance of the faculties, optimism which enables a man always to see the positive side of things, freedom from prejudice, and finally, harmony in the life of soul. When these virtues have been acquired, the twelve petals begin to move.

They express the sacred quality of the number twelve which we have in the twelve Apostles, the twelve knights of King Arthur, and again in all creation, in all action. .. We find these virtues expressed again in signs and symbols, for symbols are not arbitrary inventions - they are realities. The symbol of the Cross, for instance, as well as that of the Swastika, represents the four-petalled chakram in man. The twelve-petalled flower is expressed in the symbol of the Rose Cross and the twelve Companions.

Now we find the astral body to be endowed with still more power when we learn that its astral substance enables it not only to push back what is outside, but also, when there is no outer resistance, to stretch forth, to eject, its astral substance through its own inner strength. If one is able thus to stretch forth the astral tentacles, so to speak, with no resistance present, then there appears what is called spiritual activity; the so-called spiritual organs of perception come into being. When the astral substance is pushed out from a certain part of the head and forms something like two tentacles, man develops what is called the two-petaled lotus flower. That is the imaginative sense, the eleventh.

In proportion to his capacity for stretching out his astral tentacles, man develops other spiritual organs. As his ability to thrust out astral substance increases, he forms a second organ in the vicinity of the larynx, the sixteen-petal lotus flower, the inspirational sense, the twelfth.

By working thus upon himself man consciously builds up that which the external world has otherwise accomplished in him without his aid, forming

He himself builds organs higher than the brain, organs which are not outwardly visible to normal consciousness because they lie in a realm beyond the physical. Just as the eyes have been formed out of the astral world, the nerves out of the lower spirit world, the brain out of the higher spirit world, go out of the buddhi plane [original text: World of Archetypal Images] higher spiritual organs are formed and moulded, organs which gradually enable us to penetrate into the higher world and to look into it. These organs simply represent a development and continuation of the activity carried out at a lower stage. These higher organs of perception appear in the shape of spiritual flower-forms budding forth from man and are therefore called ‘lotus-flowers’, or also spiritual ‘wheels’ or ‘chakrams’.

A second organ of this kind may be formed in the region of the larynx, another near the heart, and so on. These spiritual sense-organs — the word inevitably implies a contradiction but there is no better expression in modern language which is coined for the physical world — these spiritual sense-organs can be cultivated by the patient and vigorous practice of immersing oneself in symbolic mental pictures which are not pictures of anything in the external world and which in this respect differ from the mental pictures of ordinary consciousness in that they do not mirror anything external but work in the soul and produce forces which can hold back the World of Archetypal Images just as eyes, nerves and brain hold back the other worlds that are around us.

[Activation of the spiritual sense-organs]

But to have arrived at this point is not enough. Anyone possessed of the faculty of clairvoyant vision can perceive these higher sense-organs in man. But these organs themselves must now be further developed. So far they have been formed out of a world higher than those worlds out of which our human constitution is otherwise built up. Now comes the second stage, the preparation for actual vision. The form taken by the process of preparation is that anyone who has attained Imaginative Knowledge through the development of the lotus-flowers and is conscious of having attained it, now passes on to something rather more difficult, to a higher stage of inner work and effort.

By means of this lotus-flower he can comprehend what is connected with temporal things, from the beginning of the earth's existence until its end. By means of this organ he also learns to recognise the occult significance of the Mystery of Golgotha

1922-08-30-GA214 sketches Man during sleep, and describes the astral organs called Heart-eye to relate to the planetary worlds, and the Sun-eye to the Zodiac and world of the stars.

Every night it is thus given to Man, — that is to say, to the part of him that goes out of the body — to come into relationship with the whole Cosmos; first, with the planetary movements, and then with the constellations of the fixed stars. In this latter experience — which may come half an hour after falling asleep, or rather later, but with many people comes quite soon — man feels himself within all twelve constellations of the Zodiac.

Initiation exercises for Man now, evolutionary pathway for humanity in ages to come

1/ Spiritual initiation exercises of meditation and concentration cause a slowly emerging astral awareness of the chakra centers and nadi flow channels of etheric life energy emerges, as well as the breathing skin pores. As a consequence of initiation exercises, one may become aware - over time - of each chakra, one after another, from the crown to ajna to throat and chakra, etc. This becoming aware may be at first very slight, but evolves.

2/ Rudolf Steiner focused on the throat (16 petalled) and heart (12 petalled) chakras only, leaving the others nearly undiscussed. This has to do with the maturity of man in the current cultural age, and its evolutionary focus.

Schema FMC00.092 shows a projected evolutionary pathway for the development of:

The current fifth epoch (editor contribution) is about the development of the 12 petalled heart chakra. See 1906-06-06-GA094 above for the link to the six basic exercices - see also Rudolf Steiner and initiation

This schema sketches the path for humanity, that also takes place in Man during spiritual development: the gradual opening of the chakras, and their gradual development.

3/ Note however: 1909-10-26-GA115 describes the the imaginative, inspirational and intuitive senses as additional astral senses over and above the physical senses, relating them to the two, sixteen, and twelve petalled lotus flowers as the eleventh, twelfth, and thirteenth sense.