The human 'I' consciousness arose through the sacrifice of the Spirits of Form whose substance (the I being their lowest element) 'rippled in' into Man during the Lemurian and Atlantean epochs, and in the current Postatlantean epoch found it's implementation in an adapted physical body and let to the development of the threefold soul, see 'Development of the I'. It took hold of the astral body (sentient soul), etheric body (intellectual soul) and physical body (consciousness soul), and this provides the threefold soul with the contemporary Waking consciousness.

However, Man's true I as a spiritual being, see Man's higher triad, is purely a spiritual entity in the higher spirit world.

So whereas 'Man' is truly a spiritual structure in the higher spirit world, the threefold soul in the lower spirit world 'operates' within and uses lower bodies (see Man's bodily structure and principles) and the organisms of earth, water, air and warmth and the higher ethers. It therefore uses all the available infrastructure: physical but also etheric and astral. (re GA202 reference below). The physical body makes for a reflection of the astral experiences called 'maya'.

The 'I' lives in the warmth body or organism, and blood is the physical expression of the I, but how does the 'I' work across the human bodily principles and subsystems on the blood-nerve interface?

This is called the I-organization: the I connects into the bodily structures of Man at different points of the nervous system (re GA174 reference, see also blood and nerves), as a mechanism of the astral body, and through that, lower down, to the etheric and physical bodies. That is the where, regarding the how, the I-principle lives in the warmth differentiations in the whole human organism through the element hydrogen.

.. and how we are having this experience is by using the lower bodies and threefold soul, so we can grow and develop in our consicousness experience.

Schema FMC00.245 illustrates how the soul and spirit live in our physical body. How the soul activity of waking consciousness and willing, feeling and thinking are related to the bodily organisms. This maps to what contemporary mineral science calls 'the hard problem of consciousness', namely the fact that current human consciousness can not be explained.

Schema FMC00.036, see also Chapter 6 in 'Extending practical medicine' (see references below), and schema FMC00.135 on the human astral body and on Blood and nerves to see the interrelationships.

The table on the lower left is important to contemplate, as the various bodies interpenetrate so this represents a cumulative 'and' effect of the bodily principles working in the nervous system. 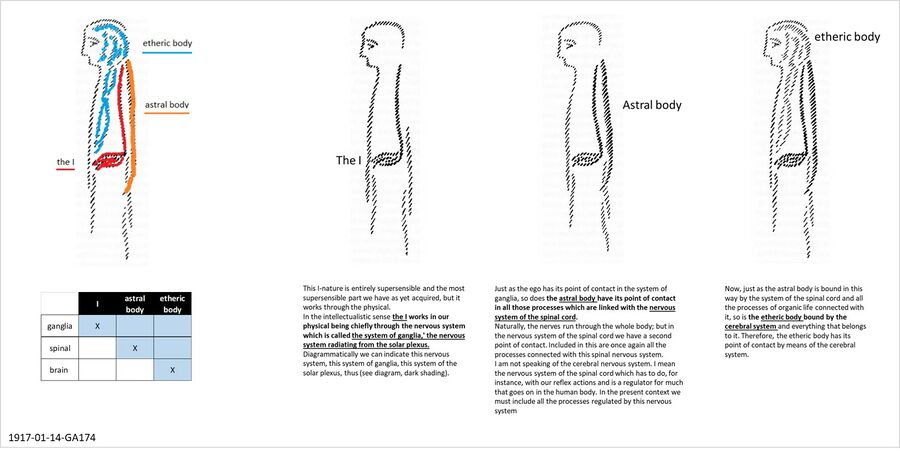 On this table, one can contemplate - along the amber spinal column - the astral senses (see sushumna on FMC00.096 on development of the chakras) and how that spinal column will develop in the future (see 1905-09-29-GA093A and Blavatsky quotes on Man past and future).

Compare with Schema FMC00.135 on Human astral body or Nerve-sense-subsystem. Another perspective to contemplate onto this schema is the role of the pituitary and pineal glands (see Schema FMC00.044 on the Etherization of blood) and how astral images are imprinted on the etheric.

FMC00.338 shows the effects of disorders in the human bodily constitution, if Man's bodily principles are not in balanced cohesion.

On the left: the I-organization in a healthy balanced constitution, with the I imprints that on astral body through the nervous system, then down the astral body on the etheric body, at various points of contact in the physical body. If these imprints, for reasons of incorrect or unbalanced development (see 1917-01-01-GA174B as well as the sixteen paths of perdition in Schema FMC00.233), cause one of the bodily principles to be loosened and released, this leads to various soul diseases as a result.

Schemas FMC00.289B is a second work schema that attempts to illustrate where some main processes take place between Man's principles. More on this on Human 'I'. It is shown here as an illustration of how the threefold soul of Man uses the lower three bodies for an I-consciousness experience, even though this takes place in a world of reflections or maya. 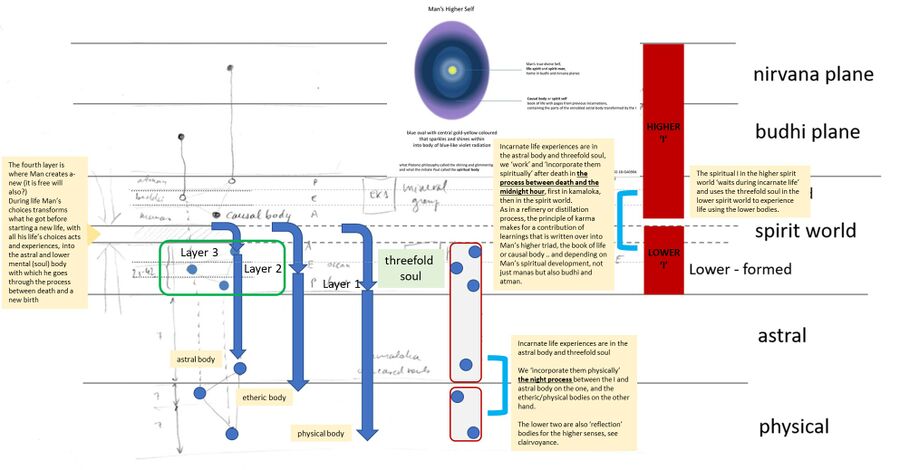 discusses the central role the blood plays in the body, recommended to study the whole lecture. See also: blood is a special fluid.

We can state thus that the blood-system is the most immediate instrument of the human I. Yet the blood-system is possible only if all the other systems are first existent. The blood is not only, according to the meaning of the poet's words, “a very special fluid”; it is also obvious that it cannot exist as it is except by finding a place for itself in the entire remaining organism; its existence must necessarily be prepared for by all the rest of the human organism. The blood, as it exists in man, cannot be found anywhere else than in the human organism.

We shall refer, further on, to the relation of the human blood to the blood of the animal; and this will be a very important consideration, since external science to-day takes little notice of it. Today we are dealing with blood as the expression of the human ego, taking account, at the same time, of a remark which was made in the first lecture: namely, that what is here said concerning man cannot, without further thought, be applied to any other kind of earth-being whatever. We may say then that, when once the entire remaining organism of man is constructed as it is, it is then capable of receiving into itself the circulatory course of the blood, is capable, that is, of carrying the blood, of having within itself that instrument which is the tool of our I. The whole human organism, however, must first be built up for this purpose.

As you know, there are other beings on the earth which seem to have a certain kinship with man, but which are not in a position to bring to expression a human I. In their case it is obvious that what appears similar in these other systems to human potentialities is built up otherwise than in the human being. To put it somewhat differently: in all of these systems which precede the blood-system there must first be present everything, in a preparatory plan, which is capable of receiving the blood.

This means that we must have:

This signifies in turn, however, that even from the other aspect of man's organism, for example, the whole nutritional system, which we have described as expressing the actual physical body of man, there must be present the potentiality of the I. The entire process of nutrition must, as it were, be so directed and guided through the organism that the blood can finally move in the courses which are right for it.

is thé key lecture for the I-organization

(see also new 2014 book version) covers how the soul and spirit live in the physical body and in the different organisms and ethers, the I dwells primarily in the warmth organism.

The physical organism of man is considered today to consist of more or less solid-fluid substances; but as well as his solid, physical body, man has within him as definite organisms, a fluid body, an air-body and a warmth-body. — The connections of these organisms with the members of man's whole being and with the different Ethers. — Thought and Tone; Ego and circulating Blood. — Man in the sleeping state. — Man's relation to the universal Spirituality. — Imagination, Inspiration, Intuition. — The circumscribed view of the human organism prevailing today is unable to build any bridge between the physical body and the soul-and-spirit.

Note, for more on the I-organization see the full GA314 cycle.

All that enters into man through the absorption of foodstuff is carried into the astral organism by the kidney system. There still remains the I-organization. The products of digestion are received into the I-organization primarily as a result of the working of liver and gall.

The warmth and the warmth-organisation in the system of liver and gall radiate out in such a way that man is permeated with the I-organization, and this is bound up with the differentiations of warmth in the organism as a whole.

It is quite possible to make absolutely exact investigations into this. Take certain lower animals where there is no trace at all of an I-organization in the psychological sense, and you will find no developed liver, and still less any bile. These develop in the phylogeny of the animal kingdom only when the animal begins to show traces of an I-organization.

The development of liver and gall runs absolutely parallel with the degree to which the I-organization unfolds in a living being. Here, too, you have an indication for a series of physiological investigations in connection with the human being, only of course they must cover the different periods of his life. You will gradually discover the relation of the I-organization to the functions of the liver.

In certain diseases of children you will find, for instance, that a number of psychical phenomena, tending not towards the life of feeling but towards the I-activities, are connected with the secretion of gall. This might form the basis for an exceedingly fruitful series of investigations.

It is, moreover, possible to relate all the differentiations of warmth — I can only hint at this — to the specific function carried out in the human organism by hydrogen in combination with other substances.

And so, as we ascend from the material to the super-sensible and make the super-sensible a concrete experience by recognising its physical expressions, we come to the point of being able to conceive the whole being of man as a highly complicated cell, a cell that is permeated with soul and spirit.