This topic is about the interface between the blood system and the nerve system, between the I and the astral organisms.

Therefore, when writing 'system' or 'organism', we have to think beyond the physical, but also blood as a special fluid, etherization of blood, the heart's two blood circuits, but also the 'I-organization' which is very intertwined with the nervous system in Man. The 'I' was developed as a gradual rippling through of the sacrificed substance of the SoF into astral, etheric and physical body. For more info, see development of the I.

The blood is the physical expression of the I, it is the carrier - through the two blood circuits joining in the heart - for our cosmic breathing. It takes what comes from the lungs, the senses, the organs of the metabolism, and flows it around the three subsystems of Man, thereby keeping the balance through the rhytmic system of the polar opposites of head-brain-nerve-sense and metabolic-limb subsystems.

The nerves are the physical expression, so to speak, of the human astral organism and developed gradually from Old Moon onwards. The nerve system consists of the sympatheic nervous system (ganglia, solar plexus) and spinal cord system (spinal nerves) on which the cerebral system (brain and cranial nerves) developed.

Schema FMC00.135 shows (left) the nervous system as the instrument of the human astral body, interfacing with the blood and I-organization (right).

Schema FMC00.159 sketches the polarity of the blood-nerve interface and how this represents the luciferic-ahrimanic polarity, as well as why Man has to keep the middle - a balanced path represented by the Christ. 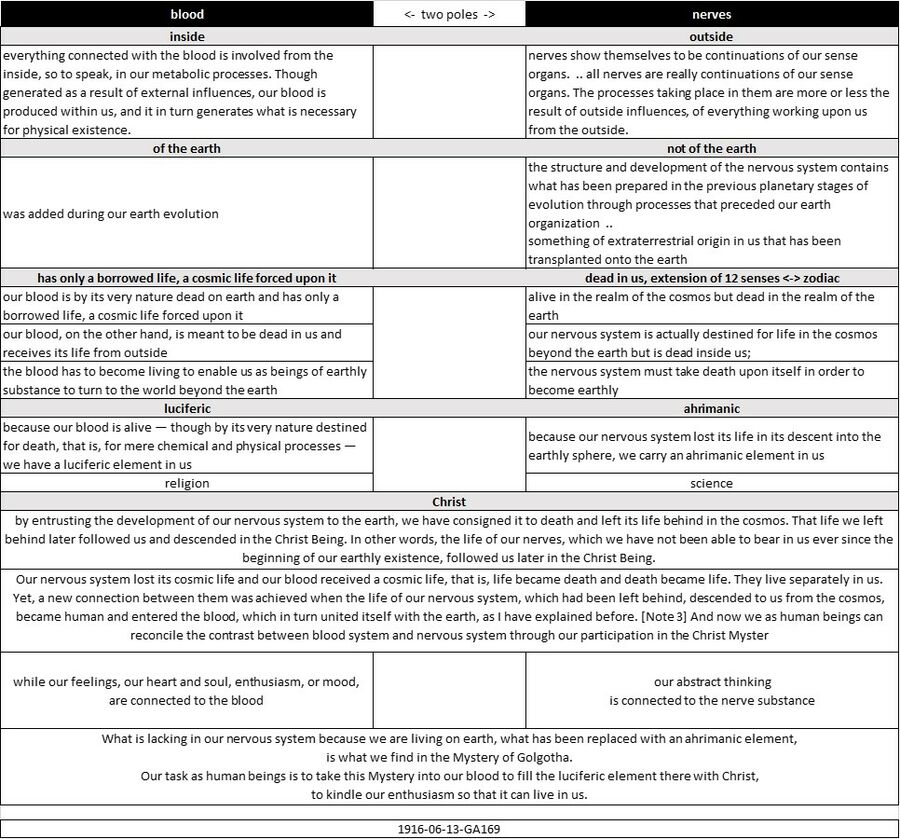 For it is the fluid which would whirl away as spirit if we were able to remove it from the human body so that it still remained blood and was not destroyed by other physical agencies - an impossibility while it is bound to earthly conditions. Blood has to be destroyed in order that it may not whirl away as spirit, in order that we may retain it within us as long as we are on the earth, up to the moment of death. For this reason we have perpetually within us:

We have a polaric process within us. We have those processes within us which, working through the blood and blood-vessels, continually have the tendency to lead our being out into the spiritual. To talk of motor nerves, as has become customary, does not correspond to the facts, because the motor-nerves would really be blood-vessels. In contrast to the blood all nerves are so constituted that they are constantly in the process of dying, of becoming materialised. What lies along the nerve-paths is really extruded, rejected material. Blood wants to become ever more spiritual — nerve ever more material. Herein consists the polaric contrast.