Matter is destroyed in the brain

If Man is a spiritual being having a physical experience (as per quote Teilhard de Chardin), than where can we see the interface between its functioning in the physical world, and the spiritual world? First of all, physical reality is a maya-type front end or emanation of, or better 'rendered by' the spiritual realities. So we do not have to look for the spiritual world anywhere else, this distinction is related to our condition of consciousness.

Nevertheless there is a specific special 'interface point' on the border of the physical and the spiritual. There is an empty space in the brain where the spirit enters, where the physical material has its interface with the etheric (hence counterspace, suction, emptier than empty).

This topic explores how Man consumes the resources of our mineral Earth and how Man's physical experience of reality generates images. These images have a real spiritual reality or substance to them, in that they are foundational 'seeds for future worlds'.

Also, through the Mystery of Golgotha these picture images got infused with new life forces thus creating a future for these enlivened images.

Schema FMC00.045 depicts the space in the human brain where the spiritual enters and matter is continuously being destroyed. On the right, the link of this topic with the schemas on Etherization of Blood. 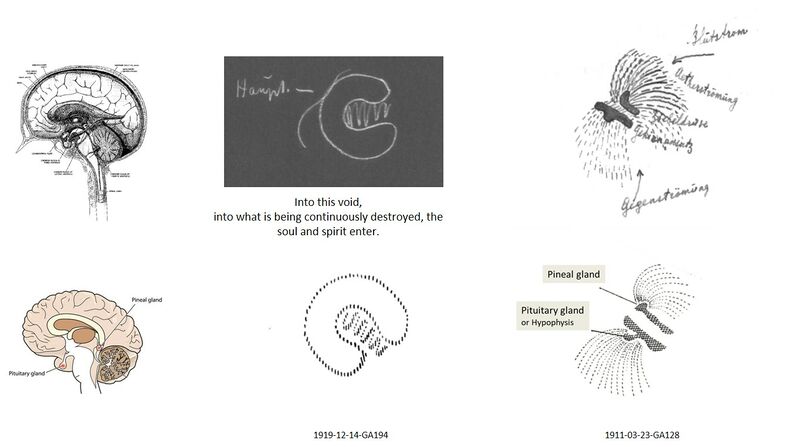 The chief characteristic of ordinary thinking is that each single act of thinking injures the nervous system, and above all, the brain; it destroys something in the brain. Every thought means that a minute process of destruction takes place in the cells of the brain.

... because science—the general world-conception of our time—does not recognize the meaning of what is 'emptier than empty', it is locked in materialism. There is in the human being, if I may express it so, a place which is emptier than empty—not in its whole, but included in its parts. The whole human being—and I mean the physical human being—is a being which fills out a material space, but a particular member of this human nature ... has actually an aspect that is sunlike - is emptier than empty. This is - you may take it or leave it - the human head. And just because the human being is so organized that his head can always empty itself and in certain of its parts become emptier than empty, through this the head has the possibility of allowing the spirit to enter into it.

The forces through which we finally die have their being in our head — are in our head. The head is an organism that is perpetually perishing; it is in retrogression. For this reason that which pertains to soul and spirit can attain its development in the head. If you represent the head in a sketch, you must do it thus: its ascending evolution has already passed over into a retrograde process; here is a void (see illustration). Into this void, into what is being continuously destroyed, the soul and spirit enter. That is literally true: it is owing to our head that we have soul and spirit, because our head is already perishing. That is to say, in our head we are perpetually dying; and the undertone of willing, which is a quality of our thinking, lies in our head; but this undertone of willing is a continuous stimulus, a constant impulse to dying, to the overcoming of matter

.. here Steiner refers to the principle of annihilation in man: that matter is destroyed in man, in the human head.

.. in her books on the etheric (see references below, eg in 'the heart of the matter'), points to the empty sun-like ethereal space in the center of the head, surrounded by the brain and enclosed by the skull:

Seen in the light of the mathematical conception of a sunlike ethereal space, the picture of the human brain contains much food for thought. .. the picture relates to an article in the Scientific American of November 1989 (see upper left) ..

Look at this picture in the light of the thoughts which have led to the understanding of a sunlike, ethereal space. The outer bony surface of the skull encloses layer after layer, sur­rounding an innermost, empty space. Surely, this is a beautiful and true example of a 'sun space'.

To understand the above, or be able to reasonably think about it, the suggestion is to first study the base principles of counterspace on the basis of projective geometry, as referenced in the section on formative forces and the etheric.

See Mathematics of the etheric and/or Force substance representation.

It then becomes clear that this point in the head is an interface between the physical-material or mineral, and the etheric and spiritual world. You can also research the greek concept of 'chaos', eg in the context of the development of the embryo by spiritual influences.

As shown in the process of etherization of blood, in this space in the head the process that takes place there astral sense impressions are imprinted on the etheric. Only: what do we think when we state astral and etheric?

Maybe one can see the etheric as a 'carrier' including higher ethers (as a metaphoric image: imagine a carrier wave in radio transmissions). For a continuation, see the page on 'enlivened images'.