Thinking, Feeling, and Willing (also denoted by the shorthand acronym TFW) are the three main activities of the threefold human soul or human 'I'.

The activities of the threefold human soul relate to the different world of consciousness: thinking, feeling and willing relate respectively to the astral world, lower spirit world, and higher spirit world. Physiologically in Man they relate to the three subsystems in Man, respectively the head and nervous system, the rhythmic subsystem, and the metabolic-limb subsystem (see FMC00.282 below and Man as a threefold being).

Importantly, the current state of development of Man's I-consciousness with contemporary waking consciousness implies that Man is 'awake' in his thinking in the head and nervous system (hence the term waking consciousness), but Man is really asleep in his feeling and willing, with a dream-life type awareness of his feelings, and really unconscious dreamless sleep of his will. (see Schema FMC00.245 below)

Evolutionary, the three faculties developed one after another as a result of the Development of the I, see the link with Walking Speaking Thinking. 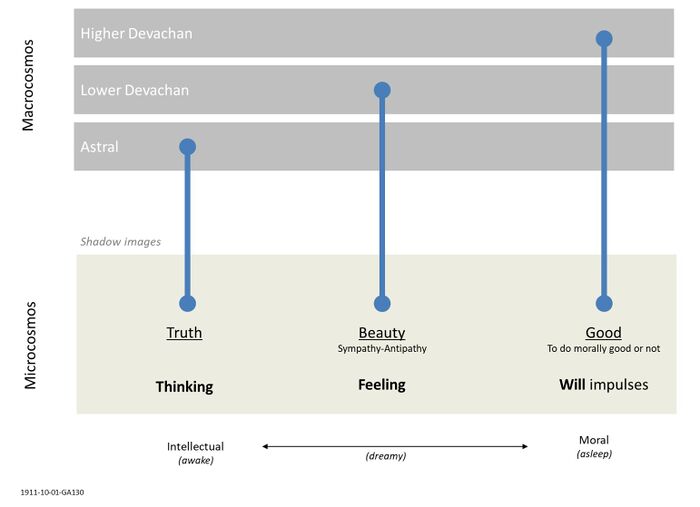 Schema FMC00.245 illustrates how the soul and spirit live in Man's bodily principles and I-organization. How the threefold soul activity and thinking feeling willing relates to the bodily organisms, and our contemporary waking consciousness is just a part of this.

FMC00.246 shows how the evolutionary 'Development of the I' soul forces of Spirits of Form (SoF) enabling the faculties of Walking, Speaking, Thinking, were brought into harmony through Christ impulse in the three pre-MoG interventions of the Christ. See also 1914-03-07-GA152. 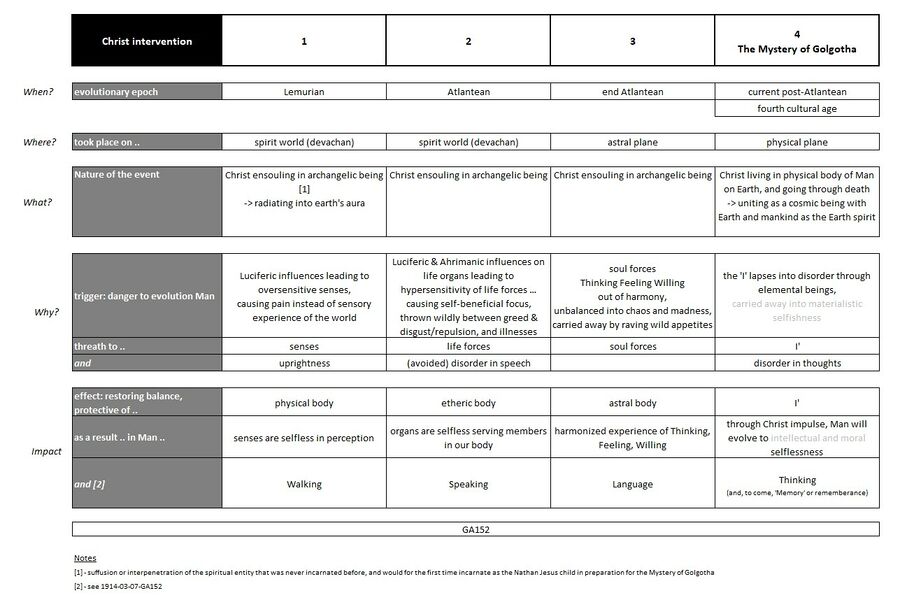 And now there is still something more to be said, as we are standing on the ground of Spiritual Science. Later epochs are always being prepared for during those that precede them. And inasmuch as we stand within the fifth Post-Atlantean epoch, inasmuch as we foster Spiritual Science and have continuously more to contribute to the understanding of living thought, of the thinking which is becoming clairvoyant — we have at the same time the sixth Postatlantean cultural age.

Just as the Christ-Impulse now streams into the thoughts of life, so will it stream later into something which is indeed one of the qualities of the human soul but must not be confused with mere thinking. The child develops his capacities out of the unconscious. When he attains to I-consciousness he enters the sphere in which he can acquire, in which he must develop, all that can come to him from outside through the Christ-Impulse. When the child has learnt to walk, when he has learnt to speak, and when with learning to think, he has begun to work through to the I, we can see how the conscious Christ-Impulse, which entered through the Mystery of Golgotha, begins gradually to work upon him. At the present time there is something else among the powers of the human soul which is not yet able to take in the Christ-Impulse. It is possible to introduce the Christ-Impulse into the power of walking upright, and into speaking and thinking; these things are possible because of that which has been done for the civilization of mankind for centuries.

We have now to prepare for the introduction of the Christ-Impulse into a fourth element, a fourth human capacity, if we truly stand on the foundation of Spiritual Science. .. The soul-capacity into which the Christ-Impulse cannot yet be directed, but into which we must prepare to direct it, is the human memory. For in addition to the walking and standing upright, the speaking and thinking, the Christ-Force is now entering the memory.

We can understand the Christ when He speaks to us through the Gospels. But we are only now being prepared as human beings for His entrance also into the thoughts which live in us and which then, as remembered thoughts and ideas, live on further in us. And a time will come for humanity which is now being prepared but which will only be fulfilled in the Sixth epoch when men will look back upon that which they have lived through and experienced, upon that which lives on within them as memory. They will be able to realize that Christ Himself is present in the power of Memory. He will be able to speak through every idea. And if we make concepts and ideas alive within us Christ will be united with our memories, with that which as our memory is so closely and intimately bound up with us.

Man, looking back at his life, will realize that just as he can remember, just as the power of recollection lives within him, so in this recollection there also lives the Christ-Impulse which has streamed into it. The path which is shown to man is to make the words, “Not I, but Christ in me,” more and more true.

And the way will be made smooth through the Christ-Impulse gradually drawing into man's power of memory. The Christ-Impulse is not yet within the memory. When it actually comes, when it lives not only in the understanding of man but is poured out over the whole length and breadth of his memories, he will not have to turn to external documents to learn history, for then his whole power of memory will be extended. Christ will live in this memory. And when Christ has entered into the power of Memory, when Christ lives in that power, man will know that until the Mystery of Golgotha Christ worked outside the Earth; that He prepared for and went through that Mystery, and that He works on further as an Impulse in history. Man will be able to survey this in the same way as he now perceives facts which live in his ordinary life as Memory. He will not be able inwardly to survey the earthly evolution of humanity otherwise than by seeing the Christ-Impulse as the central point. The whole power of Memory will be penetrated, and at the same time strengthened, by the entrance into it of the Christ-Impulse. In time to come, if we grasp Christianity in a living way, the following words will also hold good for us: —

In the Primal Beginning is Memory, And the Memory lives on further, And Divine is the Memory. And the Memory is Life. And this Life is the I of Man, Which streams into Man himself, Not he alone, the Christ in him.

When he remembers the Divine Life, In his Memory is the Christ.

And as the radiant Life of Memory, Christ will pour Light, Into every Darkness of the immediate present.

We shall be able to say that Christ is in our inner soul-life. Many of us will feel it to be so if we learn to unite ourselves with the Christ-Impulse, even as the human child learns to stand upright and to speak because he has united himself with the Christ-Impulse. Looking upon our present faculty of memory as a preparatory stage, many of us also realize that it must fall into disorder in the future unless it has the will to allow itself to be permeated with the Christ-Impulse. Should there be upon the Earth a state of materialism in which the Christ is denied, the power of Memory would fall into disorder. More and more people would appear whose memory was chaotic; who would become duller and duller in their dark I-consciousness if memory were not to shine into this darkness of the I.

Our power of Memory can only develop in the right way if the Christ-Impulse is perceived aright. History will then be a living memory because a true understanding of events has entered the memory; human memory will understand the central point of world-evolution. A perceptive faculty will then arise in man and his ordinary memory, which at present is only directed to one life, will extend over former incarnations. Memory at the present time is in a preparatory stage, but it will be endowed through the Christ. Whether we look without and see how as children we have developed as yet unconsciously, or through an intensive deepening of our soul forces look within to what remains in our memory as our inner being - everywhere we behold the living force and activity of the Christ-Impulse.

Spiritual Science is not simply to enrich us with mere theories. It is to pour into us something which will enable us to accept that which meets us in the world, and that which we ourselves are, with new feelings and perceptions. Our life of feeling and perception can be enriched if, through Spiritual Science, we penetrate in the right way into the nature of the Christ-Impulse and its sovereignty in man, in the spiritual being of man. It is well for us to think often on the following: —

May that Darkness as it is to-day, Comprehend the Light of the Memory which has become Divine!

describes how the life of human thought hang together with the ether body, how human thought is material for the beings of the third hierarchies, and how these are transformed in the etheric after death