Future Jupiter is the next planetary stage in the evolution of our solar system, and the current planet Earth. It is thereby the fifth of seven stages after Old Saturn, Old Sun, Old Moon, and the current Earth stage. Central theme for Mankind during the Future Jupiter stage will be the development of the spirit self (or manas), see Schema FMC00.130 on Man's transformation and spiritualization 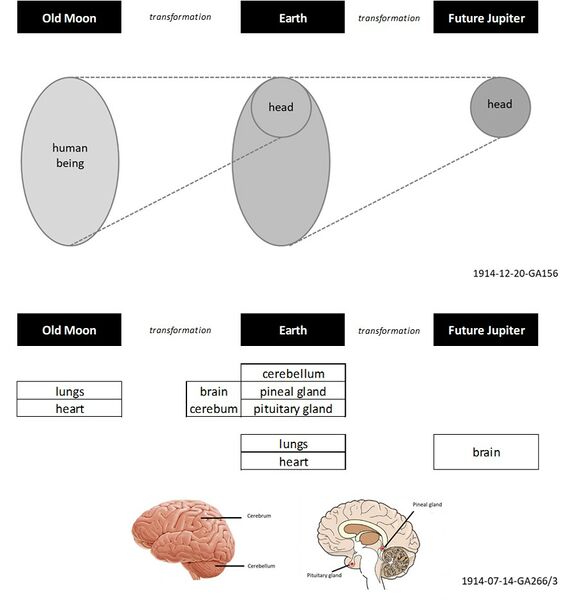 1903-10-27-GA088 contains the following phrasing that reminds of the process of Christ as a group soul for humanity, described under Unification and Second Adam (see also FMC00.128)

.. the next planetary stage of evolution will have the task of purifying the manas element on the budhi plane. All purified feelings for karma will then flow together into a single power that will strive forward the primal spirit that flows and floods through our planet. Everything that human beings feel today will, in the next stage, stream together in a purified form like flames, and these many individual flames will be united into a total fire. Thus the future sixth planet is called the cosmos of fire, it will be formed from the purified feelings of human hearts as they intertwine and harmonize their sounds together.

Kingdoms of nature, and elementals

1908-05-16-GA102 talks about the origin of elementals on earth in earlier stages of evolution, and how human beings who unite too strongly with the bodily nature can become elemental beings in the Jupiter evolution.

And now, since the later is the fruit of the earlier, these would then find no bodies suitable for them. They are, as it were, too good for the bodies of a subordinate order and for the other bodies they are too bad. They must therefore live a bodiless existence. They must cut themselves off entirely from the progress of evolution. Why have they deserved this? By reason of the fact that they have not made use of life! The world is around them; they have possessed senses in order to perceive the world, to enrich the life-kernel and mold it to a higher stage. They do not advance with world evolution, they remain behind at a certain stage. Beings that stay behind at such stages appear in a later epoch with approximately the character of the earlier age. They have grown together with it, but not in the forms of the later epoch. They appear in a later epoch as subordinate nature-spirits.

In fact the human race will furnish a whole number of such new nature-spirits in the second half of the Jupiter evolution, for man will have fully completed the fifth principle at the Jupiter stage. For those who have not used the opportunity on Earth to develop the fifth principle there will be no available form. They will appear as nature-spirits and they will appear then with four principles, the fourth being the highest. Whereas the normally advanced man will have the principles 5, 4, 3, 2 at the Jupiter stage, these men will have 4, 3, 2, 1. That would be the destiny of those who have not gradually developed their higher principles by making use of earthly life. They become nature-spirits, so to speak, of future evolutionary periods, working invisibly.

.. in our present-day cerebrum, there is something left over from the Old Moon stage: the pineal gland and the mucus gland. These glands were, on Old Moon, what the lungs and heart are in the human being of today. The two organs are no longer active today but are stunted and dried up as a remnant of the Old Moon human.

.. What today is the brain of the human being on Earth will be the cerebellum of the human being on Future Jupiter. .. they will a being sitting in the neck region telling them what is good or evil. It will be Christ, who will sit in our neck region as the judge (re Michelangelo's Last Judgement). What humanity will experience on Future Jupiter as the judgement will be something totally different from what anyone has been able to think of imagine.

1914-10-06-GA156 (p60) describes the transformation of current elements of the physical body, and what they will become by Future Venus.

1914-12-20-GA156 describes the process of transformation of the bodily subsystems, as covered in Man as a threefold being, and does this by relating Man's thinking to the illumination of the Cherubim, and Man's willing to the heating of the Seraphim. (SWCC). See also Schema FMC00.123 above.

.. what became the human head in the Old Moon stage is during the Earth stage on its way to becoming the entire human being. During the Old Moon development, the ancestor of the present-day human being existed. What was at that time an external organism has become the head today, and the limbs have attached themselves to it.