The development of macrocosm and microcosm are related and intertwined.

Consider the three previous planetary stages, and how (as explained in GA011 and GA013):

This shows that an ever-higher spiritual hierarchy is needed for the lower principle. In the next fourth planetary stage Earth, an even higher power is needed to now has to connect the higher triad and integrate it with the I substance woven by the sacrifice and work of the Spirits of Form. See also Development of the I and Christ Module 12 - the cosmic 'I'

Schema FMC00.077A helps to follow the development of the higher hierarchies.

However, it does not show the weaving, at the end of the three cycles, of the monad of the higher self by the Thrones, Cherubim and Seraphim (see below).

Schema FMC00.022 shows the development of the macrocosmos, and sketches the impact of the Christ Impulse will be until the first half of the Future Venus cycle. Compare with the CoC and outbreathing cycles of the Logoi on the above schema FMC00.077A. 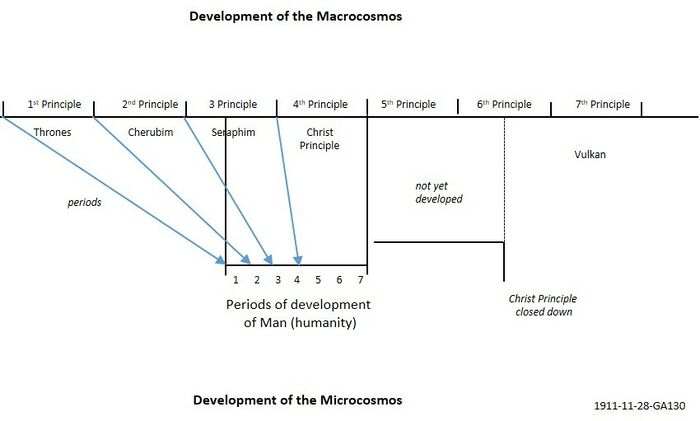 Schema FMC00.022A shows the research underlying the schema, based on the original manuscripts of the people attenting the lecture, and the typoscripts by the consecutive editors. In some lectures a topic is covered and clarified which is not to be found in any other lecture for which notes are available. In such cases it is important to understand the exact wordings and nuances. In some cases there are important details in the drawings, or major changes in the edits through consecutive editing and publishing cycles. 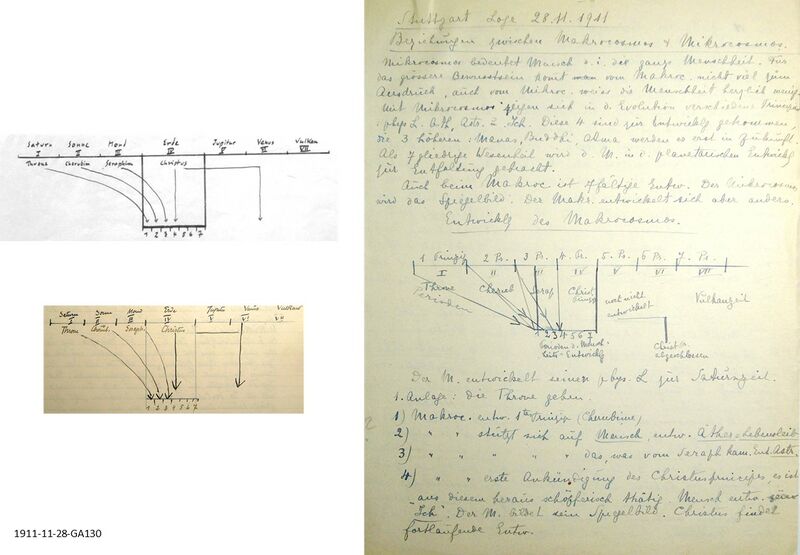 describes how on Future Jupiter, Man will experience around mid-life a short but life-changing revival of Earth consciousness. This is linked to the three days of Christ between death and resurrection, and the rescue of the human soul from the adverse powers of Lucifer and Ahriman

something will enter into the life of the human beings who have evolved into an existence on Future Jupiter; at the midpoint of their existence, they will experience something like a combination of what birth and death are to human beings on Earth at the begin­ning and end of our physical incarnation.

.. imagine that human beings will experience something in the middle of their incarnation that is roughly equivalent to what would result if you were to mix together birth and death .. you must not imagine that you could simply combine these two things just as they manifest themselves as experiences on Earth; rather, birth and death must be brought together through a kind of chemical bonding

.. in this period of Jupiter-Earth consciousness we will experience a desire to undergo a kind of internal taking stock, a review of everything we achieved and gained as human beings in the past on Earth ..

And when we look back on everything, the question will arise in each of us out of a kind of cosmic necessity. Just as we must eat and sleep here on Earth to survive, so too will it be absolutely necessary, during this brief renewal of Earth consciousness, to live the questions:

In that moment, we will witness the sum of our experiences on Earth and what we achieved will step before our soul in a powerful dream. However this will not be a dream image but as real as all of our real perceptions on earth.

and after that event everything will be different for Man

From the moment in which Earth consciousness is recalled onward, you will never be able to have the same relationship to your surroundings on Future Jupiter that you had before.

and now follows the realization that the knowledge of and living of the Mystery of Golgotha is key and forms a kind of shifting judgement, whereby Steiner refers to Michelangelo's painting of the Last Judgement.

Everything will depend on our soul's ability, in that moment when Earth consciousness is recalled, to look back and remember how our soul was filled with the Mystery of Golgotha during our time on Earth; how it was filled with the understanding that the Christ entered into human development and the development of Earth evolution.

Just think about the terrible circumstances of the human souls on Future Jupiter who look back on this time and have to say to them­selves, "During my time on Earth, I denied Christ. I did not want to know about Christ. I rejected the opportunity to learn, at the proper moment, about the Christ being who entered into Earth evolution through the Mystery of Golgotha. I cannot remember anything that happened on Earth through the Christ."

If there are souls during the Future Jupiter stage in whom all memory of the Christ has been erased, because they did not choose to fill themselves with understanding of the Christ event during their existence on Earth, then a fearsome judgment day will come for them.

Christ will not take them on to nurture and sustain them during the second half of their life on Future Jupiter, but instead will point the way

is the lecture on human and cosmic I

Thus the Christ Being is a Being Who in a certain sense is like the human being, only that man is microcosmic and has brought his four principles to expression microcosmically, and hence has his I also microcosmically as Earth-I — but the Christ as Cosmic I. His evolution was such that he was great and significant because of the perfect development of this I, which he brought down to Earth. And he had not the fifth macrocosmic principle, and not the sixth, for he [Christ] will evolve these on Future Jupiter and on Future Venus, in order that he may give them to Man.

Thus the Christ entered upon his earthly course in that he brought down to man out of the macrocosm what man was to evolve microcosmically — only the Christ brought it as a macrocosmic principle. He entered the Earth evolution in such a way that during its course He would not have a fifth, sixth and seventh principle as His personal possession, just as Man in his way does not possess them.

The Christ is a being who had evolved macrocosmically up to the fourth principle, and the evolution of his fourth principle during the earth course consists in his bestowing upon man everything which will enable him to evolve his I.

Study of the 1915-04-03-GA161 allows to coin together many things. It is described how Man's actions on Earth will give rise to the new kingdoms on Future Jupiter, and how the next stage always builds on the previous, not just in recapitulations. In that context needs to be places a phrase as

The judgement day with the image of Michelangelo may also call up in our minds the image of the Representative of Mankind between Ahriman and Lucifer.