Journey between death and a new birth

At death, the physical corpse falls away from that part of a Man's being which passes onwards through the gate of death.

The corpse is discarded and as a being of soul-and-spirit, Man lives through an intermediate period between death and a new birth, passing over from one state of existence to another.

For the human Christ experience and impact of the Christ Impulse in the stages of this journey, see Christ Module 20 - After death

FMC00.287 depicts the cycle of incarnate life with the journey between death and a new birth. The drawings are taken from George O'Neil's book 'The human life'.

FMC00.136 summarizes the experience of Man's spirit between death and a new birth, as he rises to the Spirit World and upto a certain subregion, depending on spiritual maturity. 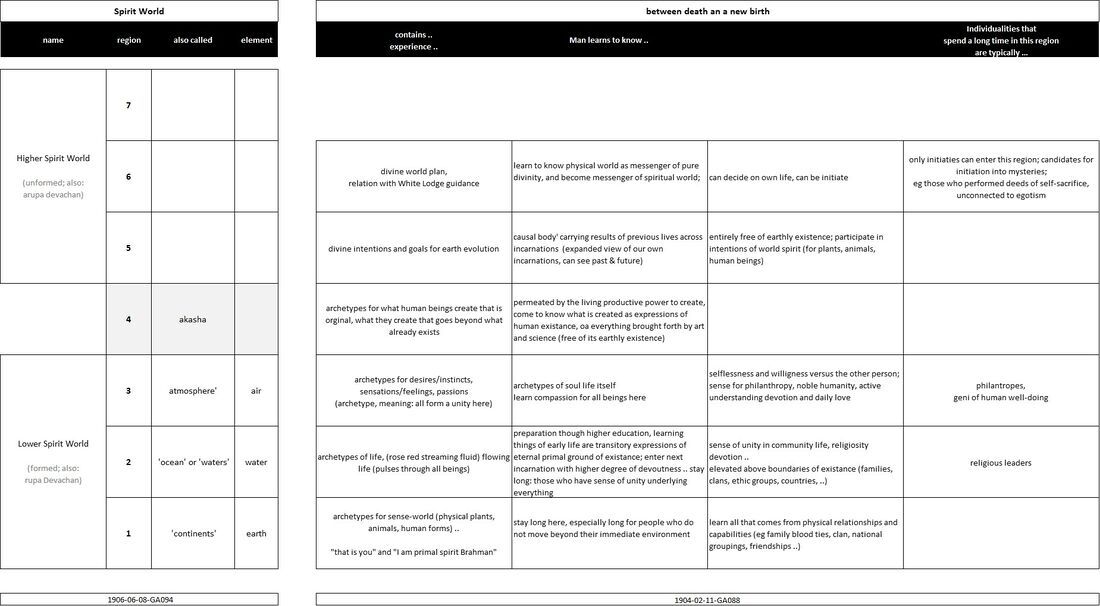 Schema FMC00.321 provides a schematic overview of the process of descent from the so-called 'midnight hour' in the spirit world, upto physical incarnation on Earth, and the connection between the spiritual process and the physical process. Adapted from Hoffmeister, see Embryo in the womb. 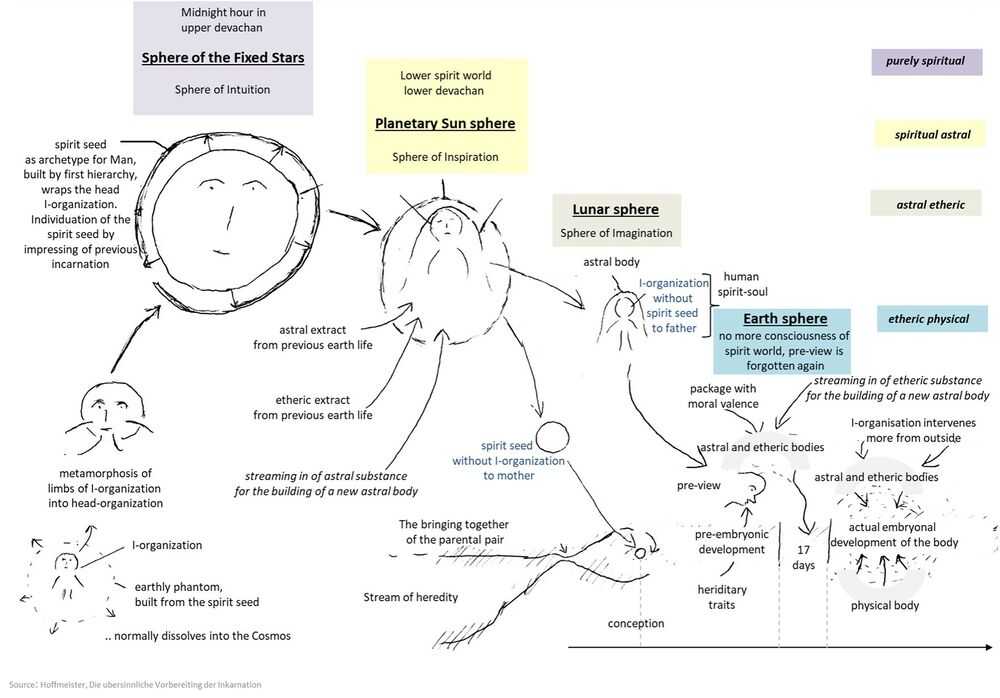 It is characteristic of this tableau that, because of the way it presents itself immediately after death, all subjective experiences of the human being during its time on earth are deleted from the tableau. Our experiences are always accompanied by feelings of pleasure or pain, joy or sadness. But the joys and pains that are attached to the images of life are not part of this review. We stand as objectively before this memory tableau as we stand before a painting. If it presents a person who is sad or full of pain, we look at the person objectively. Although we can sympathize with the sadness, we do not feel the actual pain that this person felt.

In the latter lecture, examples are given of the importance and effect of how a soul passes through a sphere (eg disregarding the Venus sphere - no great connection with family). One could imagine this may also be relevant for the link someone has with the gender choice.

.. the following possibility will arise for mankind in coming time. When at the point of descending into a next earthly life, man will be able to say to himself: ‘This is the body I have been preparing; yet, having sent it down to Earth and having now received my Karma into the ether-body which I have drawn together from the Cosmos, I see how it is with this Karma. Through something that I did in former lives I see that I have gravely hurt some other human being.’ For we are always in the danger of hurting others through the things we do. The light of judgment as to what we have done to another man will be particularly vivid at this moment when we are still living only in our ether-body, having not yet put on the physical. Here too in future time the light of Michael will be working, and the love of Christ. And we shall then be enabled to bring about a change in our decision, — namely to give to the other man the body we have been preparing, while we ourselves take on the body he prepared, whom we have injured. Such is the mighty transition which will be taking place from now onward in the spiritual life of men. It will be possible for us of our own decision to enter into the body prepared perforce by another human soul to whom we once did grievous harm; he on the other hand will be enabled to enter into the body we prepared. What we are able to achieve on Earth will thus bring about Karmic compensation in quite another way than heretofore. We human beings shall be able even to exchange our physical bodies.

.. and from various perspectives: