Man's higher triad is the actual 'higher self' or true spiritual 'I', and consists of:

Man's 'mental body' or body in the spirit world, appears clairvoyantly as a blueish oval (causal body) in which a gold-yellow central point sparkles (see Schema FMC00.164 below). That is the true Self of Man, originating from the budhi and nirvana regions.

Schema FMC00.056 positions the Higher triad in the structure of Man as a Microcosmos with the different bodily principles, see: 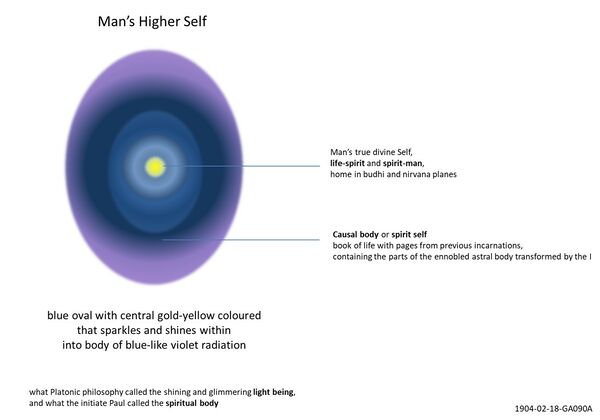 Schema FMC00.128 positions the higher triad against the Human 'I' or threefold soul, along the planes or worlds of consciousness. One can see the life of Man rolling of in seven-year phases spent developing each bodily principle. The third hierarchy H3 in the first 21 years (physical, etheric, astral), the second H2 between 21 and 42 developing the threefold I, and the development of the higher self between 42 and 63 years.

Schema FMC00.140 draws from various theosophical sources, hence the different terminology of the planes and also the unfortunate and misleading (materialistic) term 'atom' used for the node at each plane. It shows the higher triad consisting of spirit-man or atma on the nirvana plane, the life-spirit on budhi on the buddhi plane, and spirit-self in the higher spirit world or arupa devachan. This is consistent with the descriptions in Rudolf Steiner's lectures. The drawing on the left (and many more schemas and descriptions in Powell's book) also illustrates how the monad streams down through the planes to the lowest physical level.

Schema FMC00.197 connects Schema FMC00.128 above (showing the planes or worlds of consciousness) with Schema FMC00.056 above (showing Man's bodily principles), with the focus on the fact that Man's divine Selfhood is the nucleus of atma and budhi elements that is sheathed in bodily sheath principles. Both the lower and the higher self can be regarded as sheaths, and the mission of Man is to develop through all these seven main elements. However ultimately the divine origin, and future, lies above the Spirit World. See discussion section below.

The I dwells in the single human individual as Divinity.

When we consider the highly developed Men who have develop higher spiritual faculties and dedicated themselves to to a spiritual life, then also the astral body appears very different. Its shape does not appear cloudy, but rather shining from inside out on a blue background. The base of the causal body has a more or less clear dark blue colouring, and therein shines the eternal Man. The more pure and noble a soul develops in the spiritual, the more this is shown in the colour of the spiritual. We see, from inside out, a beautiful gold-yellow coloured shining that goes into blue-like violet radiation. The causal body is pervaded of these beams, and expands more and more, takes on larger dimensions. The Adept rests in the middle of this causal body, that goes from the yellow golden shining beams in its inner center to the violet shining beams around, so he is really surrounded and enclosed by this flood of light in such way that he can expand himself often ten, twenty or thirty times in length on top and below. Such are the causal bodies of the leader of mankind.

And when one looks at the imagination body of the lower Man, then we also still find shapes, but they are have become bright and shining from their inside out. ..

.. in the higher Spirit World is where Man truly develops himself and where he appears in his true being (that will then incarnate).

Here Man shines in a light blue oval, and in that blue oval shines that what we have to call the actual being of Man. Man's fine and pure blue body is woven from the finest substance of spirit world, hence the pure blue colour. I stress expressly, that one can only observe this pure blue colouring when one considers only the spiritual part and disregards all that Man still has besides. Man appears here in the highest regions of the spirit world, in his blueish oval, pervaded by his being. And this is what Platonic philosophy called the shining and glimmering light being, and what the initiate Paul called the spiritual body.

What shines and sparkles therein, in this blue oval, originates from still higher worlds (beyond all that we have covered so far).

the lecture then goes on to describe how Man incarnates into the three worlds mentioned by Paul, the spirit world, the soul (or astral) world, and the material world from which the physical body is woven.

Man lives in each world with the substance taken from that world. When we descend from the spirit world, we first clothe our actual Self with a body woven from the lower areas of the spirit world. Our being then descends to the astral world and builds the astral body there, and finally it attracts physical substance or matter before a new birth and incarnation.

However, what expands in the blue 'spirit body', in this sparkling shape or pattern, thàt does not originate from these worlds. This blueish oval storage for the Self is clothing made of the uppermost finest taken from the spirit world. Our Self, the part that incarnates, originates from still higher planes: it originates from the actual divine homeland of Man called the budhi and nirvana regions. From these two regions Man really originates.

... This is the actual eternal, heavenly, divine Being of Man. It is what Giordano Bruno called the eternal monad, the heavenly Self of Man that goes through all incarnations. It takes part in all further formation and clothes itself in lower bodily sheaths as previously described. First it shines in a wonderfully beautiful gold yellow colour, then it expands more and more, and in the other areas takes on a violet-reddish colour, depending on the different characteristics [of the individuality] ..

.. in people who developed pride and ambition in their incarnations to date, , this golden shining part of Man takes on an orange-reddish colouring. And similarly in other ways various character attributes show all the influences that need to be brought into balance again.

That is what comes rippling down from the higher worlds, to incarnate in our earthly world. That is what originates from budhi and nirvana planes, and what we denote as atma-budhi, what is made up from the highest essence or substance, what emerges from the divine being itself. ..

Then follow (p 101) the different profiles corresponding to the highest levels in the spirit world reached through the stages of development, this is also in GA088 and will be added under the topic of reincarnation.

And then one has attained the region in which the patterns from the budhi and nirvana world shine into. As Budhi shines into our spirit world, in this way the very highest shines into this region, the germs of Man's Self shine through. These germs come into the spirit world to clothe themselves there with substance (of the third region). The clairvoyant can see people in their germ form in this third region of the spirit world ..

.. we described the three members of the human physical body and the three members of the human soul. Since the third member of the physical body forms a unity with a member of the soul, we have first two parts plus one plus two, so five parts: physical body, etheric body, soul-body, intellectual soul, consciousness-soul in which the I lights up. This I is a quite interesting point in the aura. At a certain place this I becomes discernible. Within the outer oval you find a strange, blue shimmering or blue fluorescent place, also oval-shaped. It is real in such a way, as if you see a candle flame; but with the difference which the astral colours have compared with the physical colours it is in such a way, as if you see the blue in the middle of the candle flame. This is the I which is perceived within the aura.

If the human being develops ever so far, if he develops his clairvoyant capacities ever so far, at this point he sees this blue I-body at first, this blue light body. This is an overcast sanctuary, also for the clairvoyant. Nobody is able to behold into the real I of the fellow man. This remains a secret at first also for somebody who has developed his soul senses. Only within this blue shimmering place something new begins to gleam. There is a new flame which begins to gleam in the centre of the blue flame. This is the third member, the mind. This mind again consists of three members like the other components of the human being. [editor: the higher triad is meant here]

Eastern philosophy calls these members manas, buddhi and atma. These three components are developed with the present-day human beings so that, actually, only the lowest part, the spirit-self this is the correct translation of manas is developed as a rudiment. This manas is connected as firmly with the highest member of the soul as the sentient soul with the soul-body, so that again the highest part of the soul and the lowest part of the mind form a whole because one cannot distinguish them. One just beholds in the aura the highest member of the soul in the centre of the blue shimmering place where the I is, and one sees the mind lighting up within the I. Today the mind is developed with humanity up to the manas. The higher parts, buddhi and atma life-spirit and spirit-man are developed as rudiments, and we will see how they will develop speaking about reincarnation and karma in the next lecture.

One may ask: Where is this higher human self? Is it within the personal man? No, it is not there. On Old Saturn, Old Sun and Old Moon, the higher self was diffused over the entire cosmos. At that time the Cosmic Universal I was spread out over all humankind, but now men have to permit it to work upon them individually.

The I bearer, the fourth member of Man's nature, is seen as a kind of oval form, the source of which can be traced to the anterior part of the head. It is visible there to the clairvoyant as a bluish, luminous orb. A kind of bluish sheen streams out from this orb and passes into the human being. When, but not until the clairvoyant can also suggest away a man's astral body, he is able to perceive the I bearer.

Man has the other three bodies in common with the mineral, plant and animal kingdoms of nature. But the I bearer distinguishes him from these kingdoms and he becomes thereby the crown of creation.

What is the difference between the current I, and the Christ-in-me?

Schema FMC00.197 was made to contemplate and connect to the topics of the Development of the I and the Human 'I', and compare the current I-consciousness of Man with the Schema FMC00.183. Take into account the Twelve conditions of consciousness.

See also what is offered in Christ Module 12 - The cosmic 'I', from which topic page the following extract:

Until that time, the innermost kernel of being, although indeed present in man, had not entered directly into human consciousness. This was what actually happened in the event described as the Mystery of Golgotha. .. God and the primordial Divine Being, not in the ‘soul-sheaths’ but in the true I — this was what Christianity, the Christ Impulse, brought into human evolution. ... the entrance of Divine consciousness that speaks through the I — that is the essence of the Christ Impulse