The monad is a unit or entity of the divine Logos, consisting of (both descriptions exist) either atma alone, or both atma and budhi together, and to be positioned on the nirvana and budhi planes.

The concept of the monads, as related to the 'seven creative spirits before the throne' also comes back in theosophy as the so-called 'seven rays' that lie between the lower worlds (physical, astral, and higher and lower spirit worlds) and the three Logoi.

This divine core, or Man's monad, is what descends to find sheaths in the lower worlds, starting with the spirit man (atma) and life spirit (budhi) that connect with a spirit self (manas) in order to find individual self consciousness or individuation. Man's higher triad consisting of spirit-man, life-spirit and spirit-self makes up the first series of sheaths in the unformed higher spirit world. The spirit-self or causal body is the permanent Individuality of Man. The seven bodily principles or members of Man's being are all sheaths for the human monad.

Schema FMC00.062 depicts the spiritual entities involved in creation of cosmic systems like our solar system. Our solar system is described as everything upto the spirit world, with the spiritual hierarchies involved in a great dynamic interaction as explained in the Golden Chain. The spirits described in this schema are above that, and operate from nirvana and buddhi planes, orchestrating the changes at the highest level including transitions between the stages of consciousness (CoC), conditions of life (CoL) and conditions of form (CoF).

Note: The evolutionary dynamic is ongoing at all times for all hierarchies simultaneously and in parallel. In terms of the specific guidance for the development of humanity, it is also from these higher planes (buddhi and nirvana planes), that the White Lodge circle of Boddhisatvas and Buddha's operate and guide the evolution of Mankind, guided by the Christ, see the Occult atom.

Schema FMC00.062 shows the main creative entities at the highest level (as per GA089):

Schema FMC00.128 positions Man's higher triad against the Human 'I' or threefold soul, along the planes or worlds of consciousness. 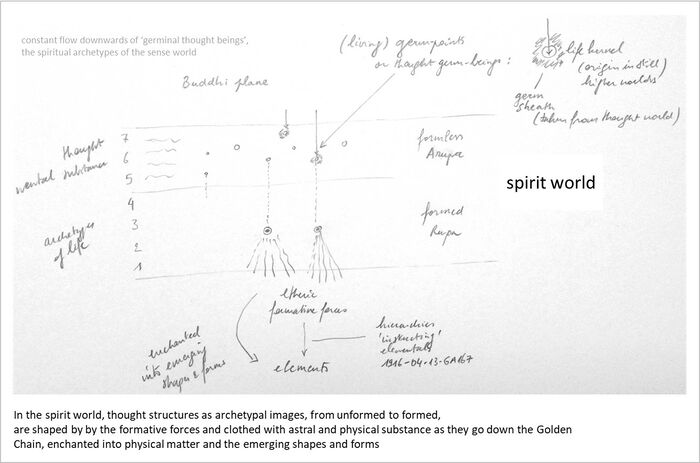 Helena Blavatsky in The Secret Doctrine (1888)

describes the monad not just viewed as one, but also a dual monadic principle that develops to a triad, quotes below SWCC

The monad of every living being . . . is an individual Dhyan Chohan, distinct from others, a kind of spiritual individuality of its own, during one special manvantara. Its primary, the spirit (atman) is one, of course, with paramatma (the one Universal Spirit), but the vehicle it is enshrined in, the buddhi, is part and parcel of that Dhyan-Chohanic essence.

atma and buddhi cannot be predicated as having anything to do with Man, except that Man is immersed in them. So long as he lives he is overshadowed by these two; but it is no more the property of that than of anything else

The monad is impersonal and a god per se, albeit unconscious on this plane. For, divorced from its manas principle ... it can have no consciousness or perception of things on this earthly plane. “The highest sees through the eye of the lowest” in the manifested world; Purusha (spirit) remains blind without the help of prakrit (matter) in the material spheres; and so does atma-buddhi without manas.

Buddhi being the first differentiation, the first ray, it is universal consciousness, and could not act on any one plane, especially on the terrestrial plane. And to be conscious of something, of somebody, it must have manas, that is to say, the consciousness of this plane.

In earlier lectures by Dr. Steiner , this life-kernel was also named Man's monad, and in the first edition of 'Theosophy', there is a sentence related to this, which had been left out in the later editions:

The unification of Life Spirit and Spirit Man is that, which Man since ancient times calls the human 'monad'. Such monads lie at the foundation of all that exists. They build their spirit, soul and physical organisations made from the three worlds, in order to live and work within those worlds.

Our Self, the part that incarnates, originates from still higher planes [than the spirit world]: it originates from the actual divine homeland of Man called the budhi and nirvana regions. From these two regions Man really originates.

We know from Cosmic Memory (GA011), that atma was predisposed at the end of the Old Saturn development, buddhi towards the end of the Old Sun development, and manas in the fifth round of the Old Moon development. This atma, which on a higher plane is an emanation from the Thrones as is the warmth of Old Saturn, became the bearer of that primordial being of humanity called the monad, which designates the innermost self of the human being. The monad was enveloped, so to speak, by atma and added buddhi on Old Sun and manas on Old Moon as further sheaths or veils.

And just as one can first speak of atma, buddhi, and manas only as a general, undifferentiated sea of spirit substance, so until the beginning of earthly incarnations in the Lemurian period, there was only one human monad, one great, undifferentiated self of humanity. Only through the addition of the I-bodies, which the Spirits of Form generated out of their sacrificial substance, could the division of the general monad into the many individual souls take place.

And only now during the earthly life can the individualization of manas, buddhi, and atma into the spirit self, life spirit, and spirit man occur through the work of the ego on the astral body, etheric body, and physical body. Although atma, buddhi, and manas are there in the universe for the human being as they are his inheritance from the sacrificial acts of the Thrones, Spirits of Wisdom, and Spirits of Movement (and also of the Cherubim and Seraphim as shown in the second section of the essay “About the Elementary Kingdoms”), the human being must first acquire this cosmic inheritance through a lengthy individual effort in order to possess it. And this acquisition happens precisely through the work on the lower members of being. Here the human being meets his own spiritual-substantial essence, for the spirit of the astral body is manas; the spirit of the etheric body is buddhi, and the spirit of the physical body is atma. We see this most clearly in the physical body when we have worked out the concept of the phantom. The forces shaping the phantom are atma forces. Correspondingly, we can assume something similar for the etheric and astral bodies.

So far, we have considered manas, buddhi, and atma primarily in terms of their substantial side, namely as the spiritual substances from which we build up the three higher entities: spirit self, life spirit, and spirit man. But even before its individuation, the human monad, that is, the innermost human essence, lives within these spiritual substances as if enveloped by them.

What we have called the monad is called the 'life kernel' in Theosophy. We saw in the previous section that the original and actual bearer of the monad is the atma. The addition of the buddhi during the Old Sun development produced the “animated monad.” When this animated monad also shrouded itself in the manas element during the development of Old Moon, the human being received a member of being that apparently no longer belongs as directly to his 'life kernel' as do atma and buddhi. This manas element is substantially equivalent to the thought substance of devachan. The 'life kernels' envelop themselves in this thought substance as they descend from even higher worlds into the devachanic world.

Out of the element of the thought-world only the germ-sheath, as it were, is taken. And this surrounds the true life kernel. With it we have reached the confines of the 'three worlds (physical, astral soul world, and spirit world) for the “kernel” has its origin in still higher worlds. When man was described above according to his component parts this “life kernel” of the human being was specified, and its components were called “Life Spirit” and “Spirit Man.”

So this life kernel is the true I, and the 'still higher worlds' are those that in the cycle Secrets of the Threshold (GA147) are called the supra-spiritual world.