Man's structure as made up of bodily principles corresponding to the planetary evolutionary stages and spectrum of elements and ethers. These bodily principles are therefore of a different spiritual constitution, woven by spiritual beings at the different worlds or planes of consciousness.

Because on Earth we are on the fourth of seven planetary stages, we distinguish in Man's

Therefore sometimes Man is called being with different 'multiplicity:

The schema below illustrates it sounds more complicated than it it, but one needs to be fully familiar with this schema in order to not get confused.

Note the Man's bodily structure is different during incarnation and life between birth and death, compared to Structure of Man between death and a new birth. During incarnation he lives in the four bodily principles that he developed during death and a new birth. After death, Man sheds his physical, then etheric and finally astral body, and continues with the cleansed part of the astral body and the I. Then Man works with the higher spiritual hierarchies in the Spirit world and develops the new bodies for the next life. See more on Man's cycle of reincarnation

Schema FMC00.086 shows the simplest overview of the constitution of Man's bodily principles, and how it can be referenced as 3,4,5,7 or 9 folded.

Schema FMC00.218 complements and expands on FMC00.086, showing the main planetary stage for the development of each bodily principle; and adding different terminology used in theosophy, jewish doctrine, and esoteric christianity.

FMC00.218A is a drawing from Rudolf Steiner in a letter to Marie Steiner, showing the development of Man's bodily principles in the seven main planetary stages of evolution. It illustrates FMC00.218.

FMC00.312 is a symbolic meta schema collating imagery on Man's bodily structure. On the left, Man's bodily principles. During death and a new birth, Man's I connects with the third hierarchy H3 and Man's higher triad. This structure is also depicted on the right with the structure of Lord's Prayer, with fourfold Man on Earth below and Man's treefold spiritual self above. In the middle is shown how the I uses the lower bodily principles to have a reality experience.

FMC00.312A is the version with the FMC schema references that are collated here, they can be followed and studied individually so as to merge the perspectives they offer and integrate them in your soul work.

Schema FMC00.130 provides a simple tabular overview of evolution and the developmental goal per planetary stage (and Condition of Consciousness) - and epoch (taking into account conditions of life and form). See more on Man's transformation and spiritualization 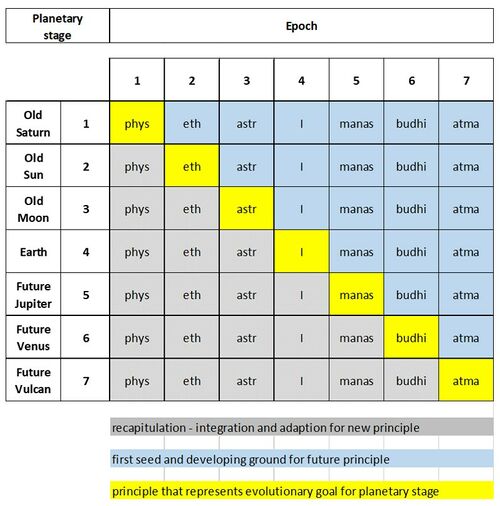 Schema FMC00.286 shows the evolutionary dimension, and illustrates that one can not always assume intellectual logic of induction and deduction to hold in reality, as spiritual research shows. The development of Man's subsystems did not develop along the sequence of Recapitulation as they were developed in the planetary stages, but actually in a more complex 'partial reverse recapitulation'.

Schema FMC00.245 illustrates how the soul and spirit live in Man's bodily principles and I-organization. How the threefold soul activity and thinking feeling willing relates to the bodily organisms, and our contemporary waking consciousness is just a part of this.

See also what contemporary mineral science calls 'the hard problem of consciousness', namely the fact that current human consciousness can not be explained by the purely materialistic mineral aspect of Man.

The Pythagorean 'quadrature' [editor: Tetractis] is nothing else than the four-foldness, physical body, etheric body, astral body and 'I'. Those who have occupied themselves more deeply with spiritual science know that the I works out from itself what we call Spirit-Self (or Manas), Life-Spirit (or Budhi), and the actual Spirit-Man (or Atma).

.. mentions that the sevenfold nature of Man was one of the things that was made known in the Turanian adept school (in the fourth and middle sub-race of the Atlantean epoch), where the sevenfoldedness was thought with the use of seven sounds, seven colours, and seven aromas all on a scale .. the principle that lives in sevenfold harmony would become an inner experience.

... describes how the various cultures in the current epoch 'discovered' the different bodily principles:

The term 'wesenglieder' is an important term in spiritual science, as it describes the structural make up in subcomponents or sheaths of any physical entity of the four kingdoms of nature on Earth. Though these appear as physical entities or objects to our waking consciousness, in fact they consist of multiple 'interpenetrating' sheaths that are part of different classes of spiritual beings of the hierarchies.

Just as the terms 'element' and 'ether' used in the spectrum of elements and ethers are a macroscopic shorthand label to describe the workings of the spiritual beings in terms of substance and force, quality and quantity, so too the various parts in the structural buildup of Man also need a language label or term. Spiritual science explains how these various components, elements, or principles, are related to a) the stages of evolution in the great cosmic fractal and b) the spiritual hierarchies that are all part of an interconnected interplay.

Choice of the term 'bodily principles'

The rationale for ‘bodily principles’ is related to the structure of Man:

The use of the word 'principles' can be illustrated with an analogy. Also with the four elements one could say that, although behind these stand spiritual beings, for Man (who does not know or see these beings due to his state of waking consciousiness) they are like philosophical principles. In fact many people, regard the four elements as philosophical principles, and even an initiate used the term in this sense. So here too what is meant with a principle is broader than the tangible or definable (in the physical world and sense) that we think of when using the world 'body'; and the broader conceptual principle is meant, with its many different aspects. Therefore: a principle, related to the bodily nature and make up, the principle being broader and less contained as in a material body.

By the word 'body' is meant whatever gives a being shape or form. The term body must not be confused with a bodily form perceptible to the physical senses. Used in the sense implied in this book, the term body can also be applied to such forms as soul and spirit may assume.

.. calling the 'I' Man's fourth 'bodily principle' (orig. "Wesensglied") ... clashes quite severely with my sense of translatory as well as essential rightness. Please reconsider ..

answer and addition to the above:

It is certainly true that there is not a direct language translation correctness between 'wesenglieder' and 'bodily principles'. The reason for this was explained above. Regarding the example of the human 'I' as Man's fourth bodily principle, this may actually be read in two ways, and this specific case can be taken to consider the chosen terminology. On the on hand, one could say it is hart to relate to the 'I' as a 'bodily principle'. However, it is certainly also the case that the 'I' is more of a principle than a 'limb of our being' (taking wesenglieder literally). The human I 'takes hold' of the lower bodily principles or components (see the penetration by the SoF - see Schema FMC00.046 on Development of the I).

The choice was made here to not call these 'bodies' because of the mineral-material physical connotation of the term 'body'. To avoid this subconscious mental trap for our imagination, the term 'principle' is deliberately chosen as an open or more conceptual term that refers to the spiritual beings that make up this 'principle' for Man's structure as part of their development and the solar system evolution. Indeed our 'bodily principles' are woven and made up of, as components of, the higher hierarchies.

There is no single Schema to this point, which is something we have to hold as a mental imagination. However one can get there ao by integrating the meaning of/in various illustrations:

Addition: Rudolf Steiner's use of the term 'principles'

Both terms are used, one source states that Rudolf Steiner started used spiritual soul as of 1923 (to be checked)