Spiritual science uses an extensive 'jargon' with a myriad of spiritual scientific terms that describe concepts and realities not found in science or the description of our physical reality. It implies that many 'reserved words' are terms with a special and specific meaning, even if these terms are sometimes also used in our everyday use of language.

A complicating factor is that the concepts and realities have been described with different sets of terminology or nomenclature, eg terminology is different in anthroposophy than in theosophy , but similarly so another terminology is used in medieval alchemy, hermetics, esoteric christianity.

The problem is even broader:

As a result, there is no simple single set of terminology. The already complex subject matter is not simplified by the fact that the student has to master and bridge these different terminology sets, with various different labels for the same (or similar) concepts.

Therefore on this site we use only one single set of terms for the hierarchies, the structural bodily principles or bodies of Man, etc .. and have streamlined for consistency wherever needed under the SWCC philosophy.

We did however keep the use of both the planes (from theosophy) as well as (the astro-language of) the planetary spheres, zodiac and fixed stars.

What remains is still the mapping between the sets of terminology used. Indeed the student will still be confronted with the different terms across the many sources. See 'Illustrations' section below, and/or Mapping theosophical terminology. These are a first iteration of a section that, in the future, could provide a better overview of mappings between various sets of terminology. See also 'References and further reading' section below for additional info.

As a or the major source of modern teachings on spiritual science comes from Rudolf Steiner, we need to consider the following.

Needless to say this adds a layer of complexity for the student.

The question is whether we need to carry this heritage along. Lectures are referenced all the time with all these terms mixed, and a lot of attention goes to the discussions with purists about the literal aspect and respecting of the original texts. Rightly so, the base text is the authentic source and its meaning should not be played around with. However it is not that simple, as the Gesamtausgabe process through which we access the lectures has gone through decades of editing of the original transcript by different editors, and then the same goes for translators who change the spin, phrasing and choice of words even more (because they have no choice, english is not german). See references below for further reading.

On this site the mission is to look at the future and not the past. Therefore we have chosen to use a single consistent terminology.

When different terms and options were available, choices were made based on the basis of various criteria including useage, in other words 'how established' or widespread terms were. For sure this is debatable, every choice can be challenged, but we are convinced that the total set of choices made represents a modern language framework that is easiest for the student (because, that is where the choices come from and are based on).

The next section gives an overview of (some of) the choices made for a uniform nomenclature on this site.

Overview table with terminology choices made

Planes or Worlds of Consciousness

Schema FMC00.093 on Three dimensions of evolution summarizes the 'Condition' terms chosen, comparing them with theosophical and esoteric christian terminology.

Evolution: planetary stages in the chain of evolution

Regarding the planetary stages in the evolution of the solar system, mapping to Conditions of Consciousness - see more on Overview of solar system evolution

Planetary stage Earth: 'extrusion, separation or departure' of the Moon and Sun?

Separation and departure are the most commonly used terms, however their link to the process of what happened does not lie contained in how we use the words today.

Therefore, although 'extrusion' may speak most to our imagination, we choose for separation because it implicitly contains the possibility of re-union, which therefore gives us a terminology also for that later stage. Hence we use separation and reunion and not extrusion or departure.

This site consistently uses the top level term epoch only for the periods such as the Lemurian or Atlantean epoch. In the early theosophical terminology often the term root-race was used to denote this evolutionary period. Rudolf Steiner explained that this term is no longer appropriate for the current epoch, see Human races.

For the level below, the periods currently spanning some 2000 years, the term cultural age is used consistenly, and not cultural epoch or sub-age.

Example illustration schema FMC00.079 gives an overview of the various terms for the different worlds or 'planes' corresponding to different Conditions of Consciousness. 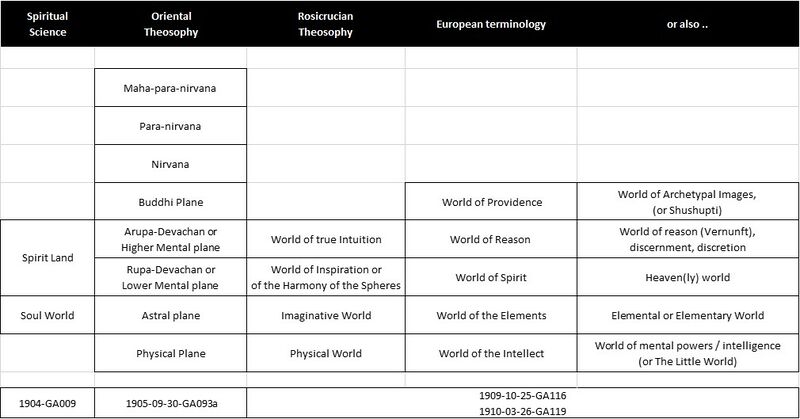