This page should be considered together with: The two halves of an evolutionary period

The epochs and ages in evolution should not be seen as discretely outlining periods with start and end of a phase. Rather, evolutionary developments take place in overlapping fashion. This has to do with the evolution of all spiritual beings in the great cosmic fractal of evolution, their cosmic breathing pattern and eigenperiods, and how they interrelate and work together.

Schema FMC00.169 shows how evolutionary periods should not be seen as discrete and separated periods, but are always overlapping. While an earlier (red) is morphing into the current (green), the future is already developing (blue). This is also related to the symbol of the spiral: evolution does not proceed in linear fashion but takes evolutionary 'jumps'. The double intertwining spirals show how a wave from the past leads to the seed from which a new wave rises. This is symbolized by the Cancer sign (see 1904-12-19-GAXXX on Zodiac clock).

Hence, these schemas give a sense that the future (blue) sixth epoch is already being developed today, in what is developing today for the next sixth cultural age. The fifth and sixth cultural ages are decisive ( see 1910-GA013 quote on the Current Postatlantean epoch.

Schema FMC00.169B is a theosophical illustration of the same principle of overlap.

Schema FMC00.438 illustrates the essential agenda for humanity in the Current Postatlantean epoch to develop the first spiritual principle of Man's higher triad, the spirit-self (or manas) - see Schema FMC00.130. This will be achieved for a large part of humanity in the sixth cultural age (light yellow) as the fruits of the fructification of the consciousness soul by the Christ Impulse (see text in red, and the two mini infographics - see also Schema FMC00.428A).

This critical period of the fourth to the sixth cultural ages was prepared in the first four cultural ages (see Recapitulation - Schema FMC00.168), in parallel in a Southeastern and Northwestern stream (see Two streams of development). Both streams relate to the Atlantean migrations and the development of body and soul in the different populations (see also Human races). The Northwestern stream was in a preparatory waiting mode for four ages, see what is discussed on the topic pages available from both Germanic mythology and Mystery School tradition, a.o. but not limited to Ragnarok, Nibelungen, Druidic and Trotten Mysteries, Wotan Impulse, etc). The two streams met in the fourth cultural age, see Christ Impulse - meeting of two streams.

The spiral below (see also Schema FMC00.169) illustrates how evolution proceeds in discrete jumps, and the whole Schema is a concrete example of that in more detail. The central node of the spiral happens between the fourth to sixth cultural ages, of which the fifth is pivotal or central.

This positions the truly pivotal nature and importance of the current times, as the Christ Impulse is to fructify the consciousness soul so as to get the fruits required for this whole epoch in the next cultural age (Schema FMC00.169A). See also Schema FMC00.052: the next three millenia are crucial, and the current (and next) incarnation(s) is and are therefore pivotal.

Last, the Mystery of Golgatha in the center of the spiral is not just central to the current epoch, but to the whole Earth cycle and the evolution of the solar system cosmos: it is the start of a new creation, see Schema FMC00.400 on Cosmic breath of Brahma. For perspective, see also the PDF file The great journey of humanity. 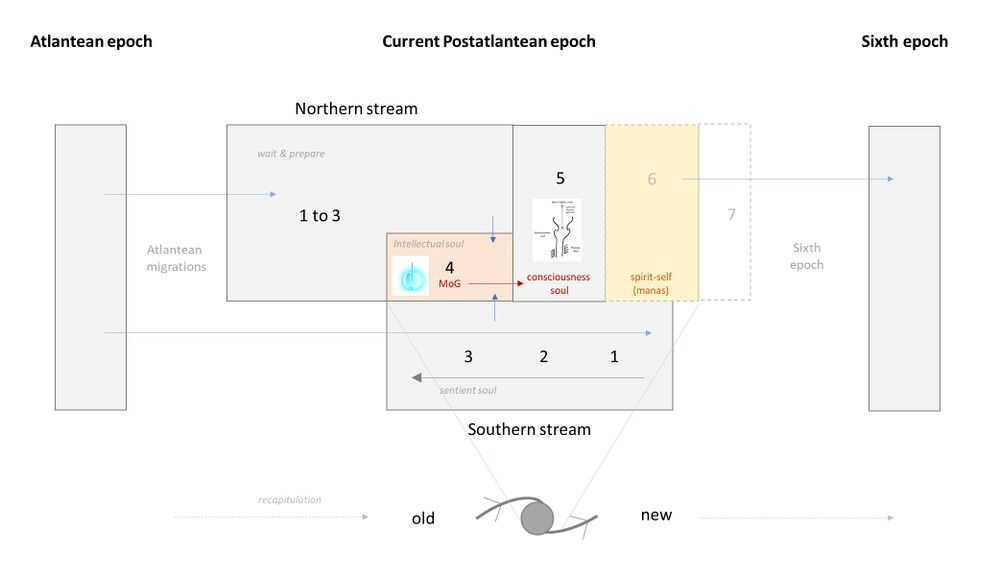 Schema FMC00.438A shows the original capture as the schema insight emerged. It is another example of how to make pyramidion statements with a simple schematic on top of a what can be described as a pyramid of information and knowledge.

Although a mental image can not be put in words, or a graphic image, still to try and word it here: the key insight here was the spiral at the bottom, the realization that the two streams had to merge for the MoG to effect in the future outgoing stream. See also: Study process and developing imaginations#.5B2.5D - Illustrative imagery

In this case that knowledge spans various dimensions (that are often studied separately): the evolution of mankind across the different cultural ages, the Christ impulse and how it works on a physiological level, the ancient spiritual science of the Mystery Schools as captured in traditions of mythology, and some meta-knowledge about the principles of evolution (eg spiral, recapitulation, ..).

The drawing as shown here in FMC00.438A has no meaning, so FMC00.438 makes it into something that the earnest student of spiritual science can connect to. In fact it uses a multitude of other schemas and topic pages to build' its meaning or convey its message. And so the student of spiritual science can only grasp all it contains after having studied and/or incorporated the knowledge and insights about the different aspects. Nevertheless, each Schema can also be used as a jumpboard to explore other aspects in a network fashion, so as a meta-schema to the schemas shown on the related topic pages. For example see Schema FMC00.441 whereby the green boxes represent titles of topic pages on this wiki site, and their relational coherence). 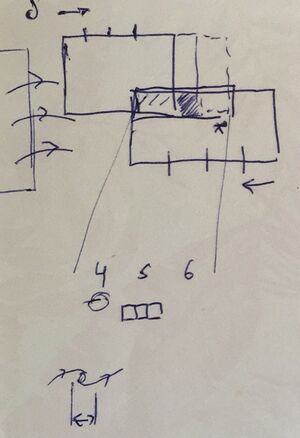 Schema FMC00.302 takes the perspective of the Conditions of Life and Form , as a frame in which to place and understand the seven epochs in this 'CoLF' or 'Condition of Life and Form' (third row on the left). See Earth rounds perspective as well as the Schemas on Three dimensions of Evolution.

'Overlapping evolutionary periods' means that we should not see this as strict periods with a start and end, but rather concurrent developments that overlap and flow into one another. In the GA090A lecture, Rudolf Steiner describes how each evolutionary period is characterized by three sections, a preparatory, a characteristic which is slowest and most important, and a final flushing one. The first part is slowing down, the third part is speeding up again.

Schema FMC00.444 shows a sketch by Rudolf Steiner depicting the imaginative insight of Schema FMC00.438 and was afterwards. 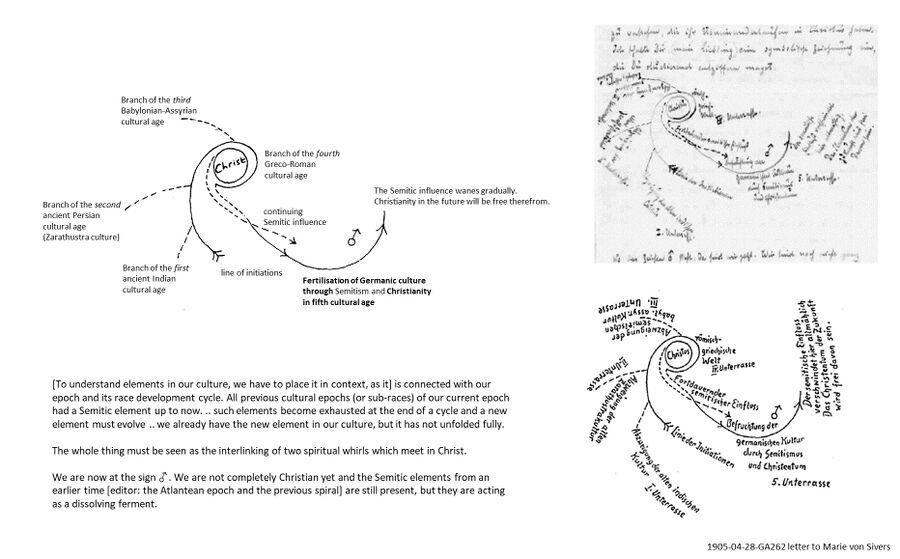 The fifth root-race [the current fifth cultural age] arose out of the ancient [Atlantean] Semitic races. A trace of this origin still lives in all the sub-races which have so far constituted the fifth root-race. ...

Thus the primal semitic impulse reaches as far as the fifth sub-race or cultural age. We see the impulses of one great stream penetrate five times into the earliest civilisations.

We have one great spiritual stream coming from the South, which is met by another stream arising in the North, which penetrates into four phases of the early northern civilisation and develops until it meets the first stream, thus flowing together with it.

The northern civilisation is symbolized in the legend of Tannhäuser, which also contains an impulse from the South. Everywhere we come across something which may be designated as a semitic impulse.

There was one thing, however, which was, felt very strongly: namely, that the Germanic races were a last link in this chain of development and that something entirely new would arise, preparing something completely different within the sixth sub-race: the higher mission of Christianity. …

It was felt that the fifth cultural age had to serve still another purpose, that it had to fulfil a special task. The old impulses had ceased, something entirely new was to come, a new spiral curve in the civilisation of the world began. What had come from the South was only an attempt; the kernel was now to be peeled out of its skins. At the turn of the Middle Ages it was felt that something old, which had been experienced as a boon, was setting and had come to an end, and that the longing for something new contained a new impulse which was gradually coming into life.

Now we must ask: What causes such utterly different conditions on earth?

At the time when the sun rose in the constellation of Cancer the ancient Vedic culture of the Indians, the culture of the Rishis reached its highest point. The Rishis, those still half-divine beings, were the teachers of men. The Atlantean civilisation had met its destruction; a new impulse broke in. In occultism this is called a ‘vortex’ (wirbel). This is also why, in the age in which the sun stood in the constellation of Cancer, the sign was made in this way:

Cancer signifies a breaking in of something new, a ‘vortex’ (a double spiral).

The second cultural epoch is named the constellation of the Twins. At that time the dual nature of the world was understood, the opposing forces of the world, Ormuzd and Ahriman, Good and Evil. Thus the Persians also speak of the Twins.

A widely used sign is the vortex, which can be thought of as two intertwined figure 6's. This symbol indicates and characterizes a certain type of event that can occur both physically and spiritually. For example, a developing plant will finally produce seeds from which new plants similar to the old one can develop. To think that anything material passes from the old plant to the new is materialistic prejudice without foundation and will eventually be refuted. What passes over to the new plant is formative forces. As far as matter is concerned, the old plant dies completely; materially its offspring is a completely new creation. This dying and new coming-into-being of the plant is indicated by drawing two intertwining spirals, that is, a vortex, but drawing it so that the two spirals do not touch.

Natural science only knows the most elementary aspects of this event. ... The spiritual aspect of that ancient culture vanished, and a new culture arose. The vortex is a sign for this event; the inward-turning spiral signifies the old civilization and the outward-turning the new.

The fifth of the Atlantean races founded our civilizations, of which the sixth will found the future civilization after the great War of All against All. …

The sixth stage (cultural age) will be the foundation for the new civilizations which will arise after the great War of All against All (the sixth epoch); just as our civilization arose after the Atlantean epoch.

On the other hand, the seventh cultural age will be characterized by the lukewarm. This seventh age will continue into the new (sixth) epoch, just as the sixth and seventh races of the Atlantean epoch continued into our epoch as races hardened and stiffening. ...

It was in the fifth stage when the Atlantean emigration began; so that the specially chosen population of Atlantis which lies at the foundation of our culture is taken from the fifth Atlantean race, for in Atlantis we may speak of races.

A sixth and a seventh followed. These were, so to speak the lukewarm races. They also survived the great flood but there was no living sprouting force in them. The sixth and seventh races of Atlantis allowed themselves to become hardened and therefore became stationary. You may still see stragglers of these old overripe races to-day, especially among the Chinese.