With the Mystery of Golgotha, the Earth was fructified with the Christ Impulse as Christ became the spirit of the Earth and future group soul of humanity. This Christ Impulse travelled over the centuries from the area of Golgotha towards Europe, subconsciously in the heart of Men and also as a knowledge stream. Meanwhile there was also the old form of Christianity, of seeing Christ in the elements of nature. The latter stream is represented by the pagan christianity, the hibernian mysteries, and the Arthur stream. See Schema FMC00.113 below, lower left.

In the 9th century these streams met, and it is this area that also the story of Parsifal plays (most probably, no exact historical timing is known). This important milestone also coincides with the 8th oecumenical council of the Catholic church that banned the spirit and declared that man consists only of body and soul.

However, these development also have to be put into perspective of an important transition towards the consciousness soul, whereby the previous guidance of the spiritual hierarchies was let loose and descended into Man. As the ancient form of clairvoyance and old wisdom subsided and disappeared, the new was being developed and arise with the rosecrucian impulse. Hence the ancient traditions of the Arthur stream over the legend of the Holy Grail was brought into the new era with Parsifal, the new form of consciousness, Man's independant free will and thinking, and also the new forms of knowledge and initiation. And the new form of clairvoyance that will arise from this.

Schema FMC00.113 depicts the meeting of two streams of Christ experience: the old 'outer' pagan christianity seeing the spiritual sun in nature's elements, and the new 'inner' christianity living in the hearts of Man. This leads to the struggle and change symbolized by the Parsifal story. Parsifal does not have to search or find the grail externally but in his own heart, symbolized by the 'asking questions'. See also: Christ Module 6 - principle in image and story. 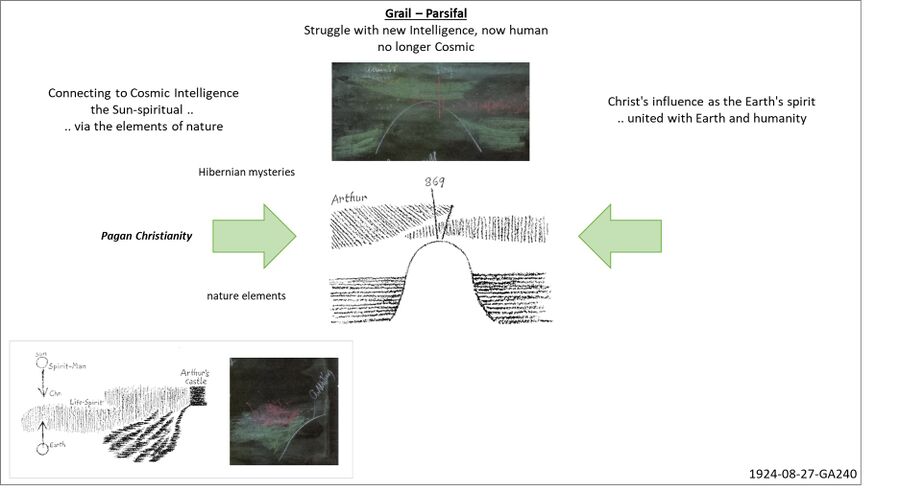 Schema FMC00.167 provides a two millenia overview of the cultural age of the intellectual soul, with focus on the preparations and overflow into the consciousness soul. In Rudolf Steiner lectures, key dates come back of the 4th century, the 9th century, the year 1250, and the first part of the 15th century. All these are related as shown in the green and blue bars on top, showing a gradual process centered around the 'kick-in' point of the 4th century, but starting 5 centuries earlier and having its effect until 5 centuries later (darker blue). This is the peiod of handover of SoF to archai, the great curtain was now finally let down over the ancient atavistic clairvoyance and old wisdom (see eg old knowledge phase out, upto the School of Chartres). At the same time it is also a new beginning of a form of new thinking of which Scotus Eriugena was a very early post, which saw its rising with scholasticism, and that really 'hit' the whole of humanity from the 15th century onwards. This gave rise to the new autonomeous thinking by Man, and the development of mineral science. Around 1250 is when the SoF weave the consciousness soul, and in the first third of the 15th century the first hierarchy, in some sort of 'cosmic thunderstorm', 'hard-codes the wiring' into Man's physical system, the sense-nerve subsystem.

The above chart is focused on the transition of the consciousness soul, it does not show the new Michael era starting 1879 and the new form of clairvoyance that appears from 20-21st century onwards (see Christ in the etheric). It also does not show the counter-events of the two Thirty Years Wars, the first from 1618-1648 countering the Rosecrucian impulse, and the second from 1914-1945 to counter the Michael impulse and distort the German-Slavic cultural and spiritual developments.

The above picture fits into another - FMC00.013 - that zooms out to the whole Current Postatlantean epoch, where it represents the 'lowest' fourth cultural age. It positions well that we are, even after five centuries, still at in the first half of the developing fifth cultural age.

The fifth and sixth cultural ages are decisive ( see 1910-GA013 quote on the Current Postatlantean epoch, as well as Schema FMC00.169A on Overlapping evolutionary periods. 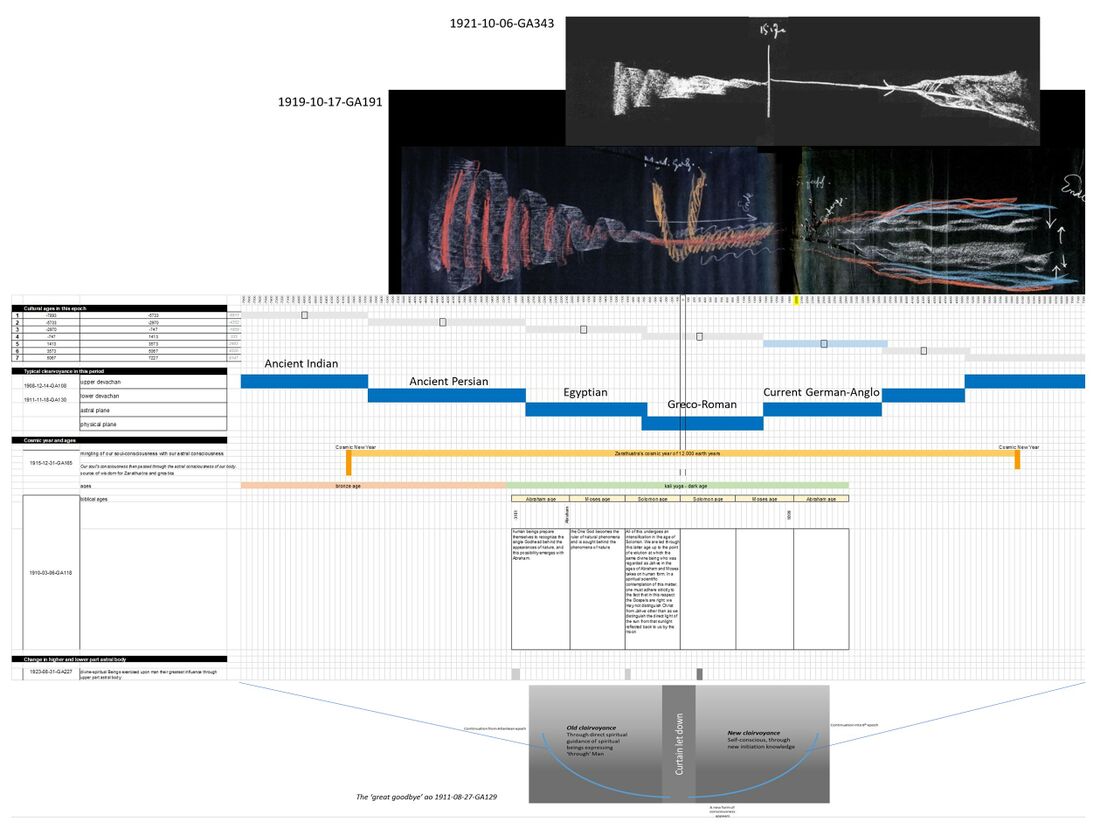 It is Christ himself, who goes from heart to heart, soul to soul, who traverses the world over the centuries, whether or not people understand him!

And now two great streams met, one stream of which we may say — for all that I am saying now is simply a relation of facts, not in any way letting fall a shadow of sympathy or antipathy but simply describing actual history — two streams met,

the Christ moving from East to West in hearts of men, through Greece, Northern Africa, Italy, Spain, across Europe .. while over in the West He was working through nature.

1922-07-23-GA214 tells the story of the 'college for destruction of initiation, gnosis, spirit' in a descriptive context of Man's position to the spiritual world

Then the following happened: the Roman world, which the Christian impulse followed in its greatest westward development, was permeated in its spiritual understanding with an inclination, a fondness, for the abstract. The Romans tended to translate perceptions, observations, and insights into abstract concepts. However, the Roman world was actually decaying and falling apart while Christianity gradually spread toward the west. And, in addition, the northern peoples were pushing from the eastern part of Europe into the west and the south.

Now, it is remarkable that, at the very time Rome was decaying and the fresh peoples from the north were arriving, a college was created on the Italian peninsula, a collegium concerning which I spoke recently [see 1922-07-16-GA213], which set for itself the task of using all these events to completely root out the old views and modes of seeing, to allow to survive for posterity only those writings which this college felt comfortable with.

History reports nothing concerning these events; nevertheless, they were real. If such a history did exist, it would point out how this college was created as a successor to the pontifical college of ancient Rome. Everything that this college did not allow was thoroughly swept away and what remained was modified before being passed on to posterity. Just as Rome invented the last will and testament as a part of its national economic order so that the dispositions of the individual human will could continue to work beyond the individual's life, so there arose in this college the desire to have the essence of Rome live on in the following ages of historical development if only as an inheritance, as the mere sum of dogmas that had been developed over many generations.

“For as long as possible nothing new shall be seen in the spiritual world” — so decreed this college. “The principle of initiation shall be completely rooted out and destroyed. Only the writings we are now modifying are to survive for posterity.”

1916-09-17-GA171 shows how the anticipated development (see the cosmic plan in Occult atom) is very slow and gradual, and the forces of opposition kick in with their full weight at specific points. In other lectures, Steiner describes the origin and intentions of Ghenghis Khan but also before of the Huns, which was about the period describes above in the 1922-07-23-GA214 quote. Hence these two can be taken together as attacks of the 'counterforces'.

The luciferic and ahrimanic powers are working in this fifth post-Atlantean age to disturb these forces in the human soul, to employ them to a wrong end, thus bringing men's souls out of the earth sphere to establish a new sphere of their own. Many things must work together to disturb the right, quiet and slow unfolding of these forces. Note well that I say the quiet and slow unfolding because the entire period of 2,160 years, starting in 1413 A.D., should be used for the gradual unfoldment of the forces I have named, that is, free imaginations and the gradual development of working with primal phenomena. At intervals — by fits and starts, as it were — the luciferic and ahrimanic powers throw the whole weight of their opposition against this right evolution. When we bear in mind that everything is prepared for by the world beyond the earth long before it happens, we shall then not be surprised to find preparations being made to bring the strongest possible forces of opposition against the normal evolution of humanity.

Then the new age of the fifth cultural period dawned. Its main feature was the further development of intellectual abilities, which blossomed exuberantly then and will continue to unfold in the present and future. A gradual buildup to this period began in the twelfth and thirteenth centuries, and its progress accelerated from the sixteenth century onward into the present.

Under these influences, cultivating the forces of reason became the chief concern of evolution in the fifth cultural period.

In contrast, traditional knowledge of and confidence in a supersensible world lost more and more of its power over human souls. However, it was replaced by what we may call an increasingly strong influx into human souls of knowledge derived from modern supersensible consciousness. “Hidden” knowledge was now flowing, although imperceptibly to begin with, into people’s ways of thinking. It is self-evident that intellectual forces have continued to reject this knowledge right into the present.

But what must happen will happen in spite of any temporary rejection.

Symbolically, this hidden knowledge, which is taking hold of humanity from the other side and will do so increasingly in the future, can be called “the knowledge of the Grail.” If we learn to understand the deeper meaning of this symbol as it is presented in stories and legends, we will discover a significant image of what has been described above as the new initiation knowledge with the Christ mystery at its center.

Therefore, modern initiates can also be known as “Grail Initiates.”

This must have talen place in the 4th century. See notes below, and also Schema FMC00.167 above: the 4th century is described as a pivotal point for the 'Loss of Logos' in several lectures.

The Fall of the Western Roman Empire was the process in which it failed to enforce its rule. The loss of centralized political control over the West, and the lessened power of the East, are universally agreed, but the theme of decline has been taken to cover a much wider time span than the hundred years from 376 As a convenient marker for the end, 476 has been used since Gibbon, but other key dates for the fall of the Roman Empire in the West include the Crisis of the Third Century, the Crossing of the Rhine in 406 (or 405), the sack of Rome in 410, and the death of Julius Nepos in 480