o   the connection between the upspringing of all the budding new life of nature and the death of Christ on the Cross. This connection is the secret of the Holy Grail

o   the new budding life of nature in Springtime is connected with the Mystery of the Cross.

The story or legend, origin and storyline

One aspect of the legend of the Grail is that the Grail is the physical chalice from which Christ-Jesus drank at the Last Supper, and in which Joseph of Arimathaea gathered some of the blood that flowed from His wounds on the Cross. This chalice was cut from a particularly precious stone from Lucifer's crown when it was struck by Michael's sword of light during the battle waged in the spiritual world between Lucifer and Michael.

In one version the chalice through various travels would have landed on the island of Avalon (near current Glastonbury).

White magic of the Tempeleisen or Knights of the Holy Grail

The earliest legend appears at the turning-point of the Middle Ages: the grail of Christ Jesus is moved from Titirel to castle Spain Monsalvat in Spain, where it is garded by twelve knights.

Lohengrin represents one of these Knights of the Holy Grail, a great initiate the Swan of the third degree of discipleship.

The Swan in Grail stories is a symbol for an initiate who can see into the higher spirit world and passes to a sphere beyond the world of stars from where the initiate experiences the Logos as the primal source of the universe. Such initiate is permeated fully with the Christ principle and whose ether-body which has become Life-Spirit. By this ether-body he is borne upwards to the higher spirit world where the laws of space and time do not hold sway. The Swan is the symbol of this ether body who bears Lohengrin over the sea in a boat (the physical body, regarded purely as an instrument) over the material world.

The productive power that shows itself in the flower chalice of the plant, going up through the other realms, is the same as in the Holy Grail. It merely has to go through purification in the purest, noblest form of Christianity, as we see it in Parsifal.

Klingsor his a black magician in opposition of the Templars. Klingsor and temptress Kundry (modern Herodias) represent the enemies of the knighthood of the Holy Grail. Klingor has not destroyed desire, but only the organ of desire.

He represents a form of Christianity coming from the South and that introduced an ascetic life as a way to eliminate a sensual life. However this could not destroy desire, and thereby was unable to reach a higher spiritual knowledge.

Two forms of Christianity -> something else needed

o   Parsifal three stages: 1/ compassion (also for animals), 2/ rising above desire (without killing desire from outside) or: Emancipation from a love dependent on the senses

The name of the Grail in the stellar script

Rudolf Steiner as of 1904-5 always referenced Wolfram von Eschenbach version of the Grail story. However he did know de Troyes version and seemingly referenced it for specific points where relevant:

On other occasions I have mentioned that the best literary account of Parsifal's arrival at the Castle is to be found in Chrestien de Troyes.

Schema FMC00.115 sketches the counterforces of Klingsor, Iblis and Kundry and their contextual story.

This is not purely a symbolic story but the characters and locations have a true historical basis. In other lectures Rudolf Steiner points out Sicily is still regarded as a center of evil influences that is even noticeable in the aura. Then again the Etna has a special (positive) esoteric meaning to, see ao Johanna von Keyserlinck and the story of Empedocles. 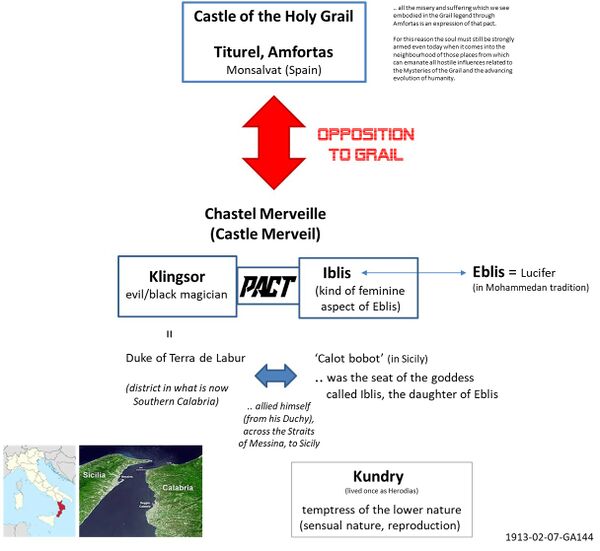 Kundry the tempress of the lower nature

The Templars were those who stood for true Christianity as distinguished from Church Christianity. In the Middle Ages remnants were still left of the old degenerate mysteries. All that belongs to those is grouped together under the name of Klingsor. He is the black magician in contrast to the white magic of the Holy Grail. Wagner places him in opposition to the Templars.

Kundry is the modern version of Herodias, the symbol of the force of reproduction in nature, the force that can be chaste or unchaste, but is uncontrolled. Beneath chastity and unchastity lies a fundamental unity; everything depends on the way of approach. The force of reproduction that shows itself in the plants, within the chalice of the blossom, and right up through the other kingdoms of nature, is the same as in the Holy Grail. Only, it has to undergo purification in that noblest and purest form of Christianity which manifests in Parsifal.

Kundry has to remain a black enchantress until Parsifal releases and redeems her. In the polarity of Parsifal and Kundry we can sense the working of deepest wisdom. Wagner, more than anyone else, took care that men should be able to receive what he had to give without knowing that they were doing so. He was a missionary who had a most significant message to deliver — to deliver, however, in such a way that mankind was not aware of receiving it.

On the one side, we have the temple of the Holy Grail with its knights, and on the other, the Magic Castle of Klingsor with his knights, who are, in reality, the enemies of the knighthood of the Holy Grail. We are confronted with two forms of Christianity. One kind is represented by the knights of the Holy Grail and the other by Klingsor. Klingsor is the man who has mutilated himself in order not to fall a prey to the senses. But he has not overcome his desires, he has only taken away the possibility to satisfy them. Thus he lives in a sensual sphere. The maidens of the magic castle serve him, and everything belonging to the sphere of desires is at his disposal.

Kundry is the real temptress in this kingdom: she attracts everyone who approaches Klingsor into the sphere of sensual love. Klingsor has not destroyed desire, but only the organ of desire. He personifies the form of Christianity which comes from the South and introduced an ascetic life; it eliminated a sensual life, but it could not destroy desire; it could protect against the tempting powers of Kundry. A higher element was perceived in the power of a spirituality which rises above sensual life into the sphere of purified love, not through compulsion, but through a higher, spiritual knowledge.

Amfortas and the knights of the Holy Grail strive after this, but they do not succeed in establishing this kingdom So long as the true spiritual force is lacking, Amfortas yields to the temptations of Kundry. The higher spirituality personified in Amfortas falls a prey to the lower memory.