In the human heart, two blood circuits meet, a minor and major blood circuit. The rhythmic heart and lungs mediate between these two circuits:

The lungs are intermediate between the oxygen (inhalation) and carbon-dioxide (exhalation) in the blood (see Schema FMC00.157 below)

Thus the secret of Golgotha lives between the heart and the lungs in each human being, in a very human, organ-related sense.

For a commentary, see Note [1] in Discussion area below.

Schema FMC00.034: Note that the form layout of the heart with the two circuits (see drawing right) can be mapped to the Earth between Sun and Moon (see middle drawing). This relates to the two etheric streams represented by Sun and Moon (see also Emerald Table). 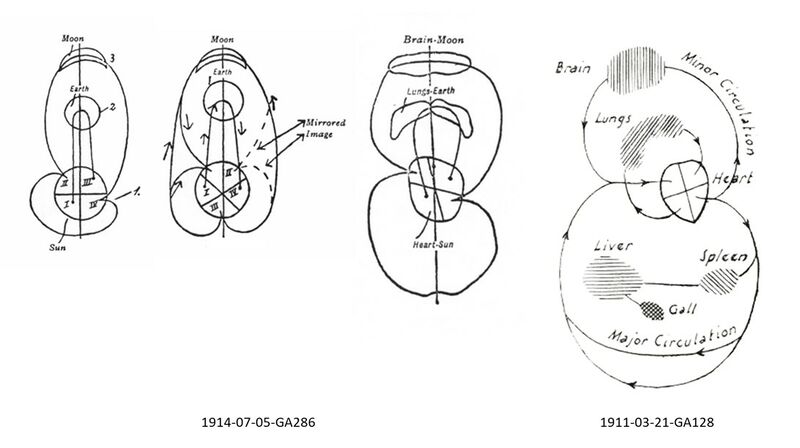 Compare the above with the notebook entry lower right of FMC00.339A on Rudolf Steiner's Gesamtausgabe (GA).

Schema FMC00.180 (from Olive Whicher) shows an etheric perspective on the heart (left), connecting it with the image of 'Man as an inverted plant' (right - see also Schema FMC00.110 on Man as a threefold being ). The middle drawing represents the area between two focal points with the heart above and the brain below. See more on: Etherization of the blood 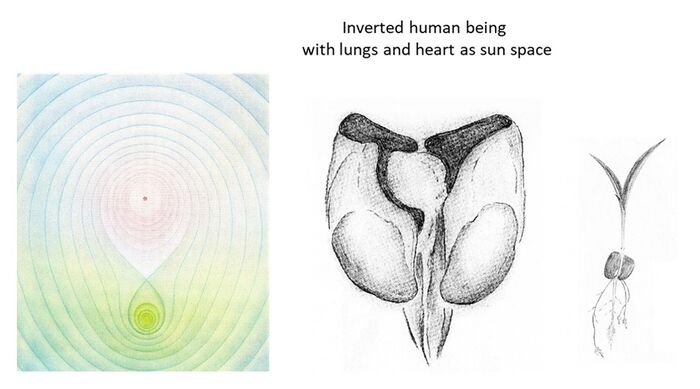 Schema FMC00.034B shows the symbolism of the form in the layout of the first Goetheanum in Dornach

Schema FMC00.228 shows on the left, the fourth apocalyptic seal with the two pillars J and B representing (red and blue) the Trees of Knowledge and Life. The blue tree clearly knowledge with the linked book and standing on physical earthly ground, the red tree clearly upstreaming life. Two pillars supporting earth’s development: Jupiter and Mercury, Old Sun and Moon, Strength and Wisdom.

On the right, a Freemason Rosicrucian illustration dated 1779 (taken from 'The Freemason by Eugen Lennhoff, published 1913). See also the alchemical symbols of earth below B, and air below J 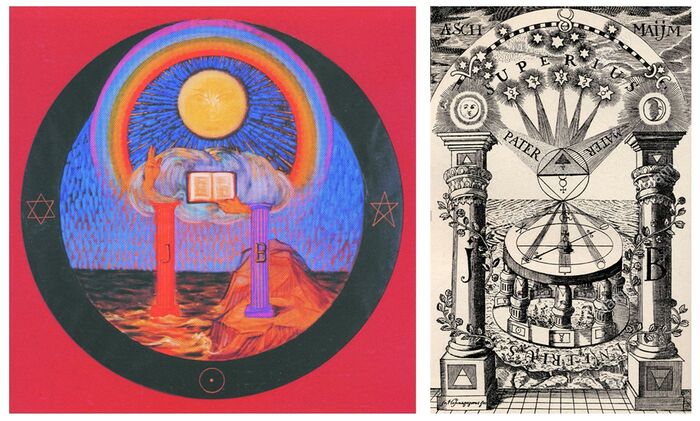 The form also corresponds to the layout of the Goetheanum and the Druid stone circles near Penmaenmawr in Wales, as Rudolf Steiner points out in when describing the particular geographical qualities of a specific location and the astral atmosphere in 1923-09-14-GA228:

You come to realize how these old Druids chose for their most important cult-centers, just such places in which the spiritual as it approaches mankind, expresses itself to some extent in the quality of the place. Those Druid circles we visited — well, if we had gone up on a balloon and looked down from above on the larger and the smaller circles, for though they are some distance apart you would not notice that when you are a certain height above them — the circles would have appeared like the ground-plan of the Goetheanum which has been destroyed by fire.

Olive Whicher goes into this in her book 'Sunspace'.

[1] - Commentary on quote: "the secret of the MoG takes takes place between the heart and the lungs"

Once again the full quote:

Blood in the heart, striving toward the breath in the lungs, is humanity's striving for the cosmos.

The breath in the lungs, striving toward the blood in the heart, is the cosmos forgiv­ing humanity.

The human being streams into the cosmos on an ongoing basis in the flow of the blood. This is an event that shapes itself radically after death by seizing the entire physical being through the blood....

Thus the secret of Golgotha lives between the heart and the lungs in each human being, in a very human, organ-related sense.