Man as a threefold being

Man is a threefold being in that three subsystems arose as part of the previous planetary stages in evolution [1]. Hence three 'subsystems' can be distinguished:

For more info on how these subsystems work together, see Threefold working in Man

Schema FMC00.112 illustrates that the aspects of the threefold nature of Man can be named head, chest and limb, but denote subsystems that run throughout the physical and etheric bodies of Man. 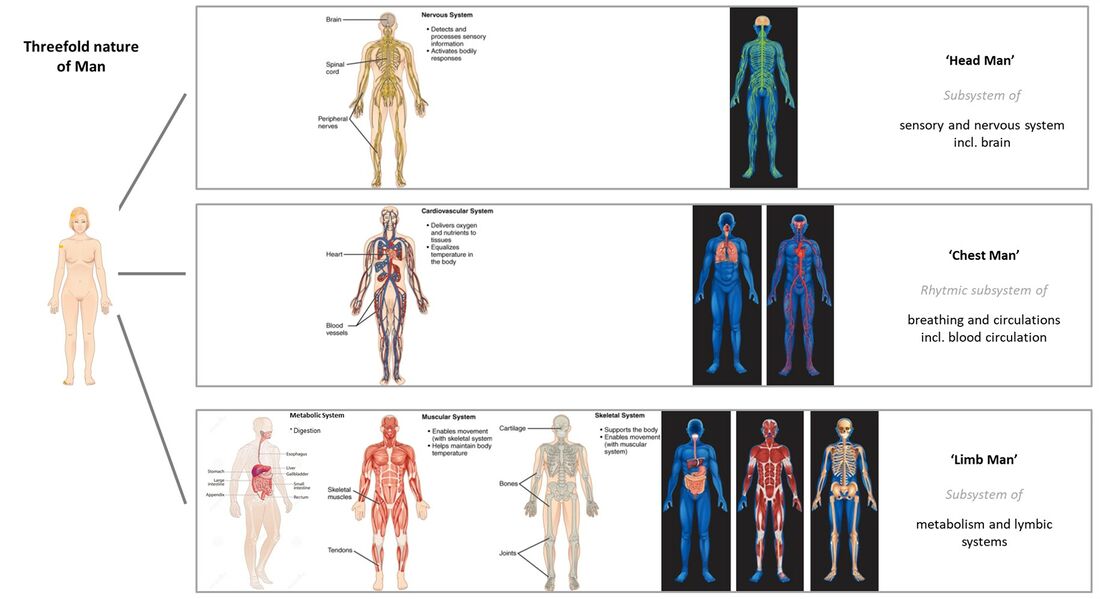 Schema FMC00.448 is an illustration of the threefold nature of Man, and the different forces working in the upper and lower parts of Man. This image is taken from the casket from the grave of Tutankhamon. For more see also the work of Frank Teichmann from which the picture on the left was taken. 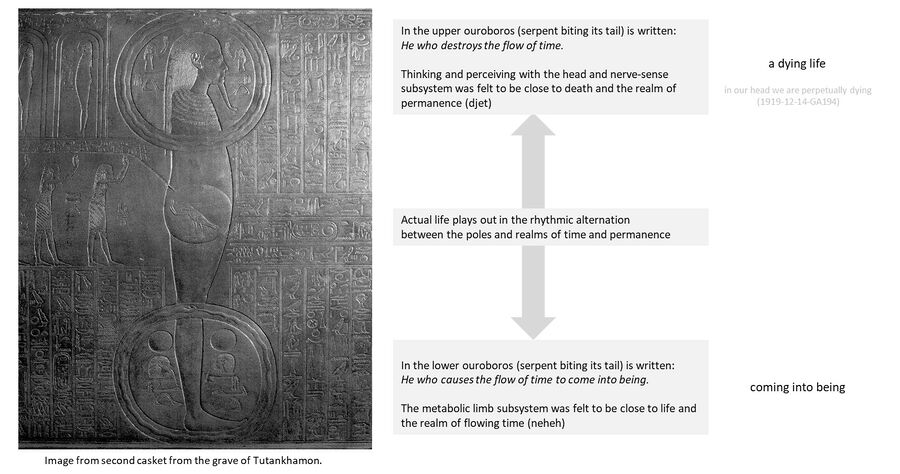 FMC00.026 illustrates the three subsystems in Man, their primary location in the physical body (though each of them extends to the whole organism, so they are not spatially separate but interpenetrate ) and link to Man's bodily principles and the stages of Solar system evolution.

FMC00.058 shows how the three subsystems in Man map to three different worlds and the formative activities and substance of three different groups of spiritual hierarchies.

Schema FMC00.392 shows the elements of the physical body that relate to the three subsystems in Man as a threefold being, and the three worlds from which they are built by the three main triads of the spiritual hierarchies. See also the Bull, Lion and Eagle influences, see Sphinx.

Schema FMC00.294 considers Threefold Man as a warmth mechanism (see the Human 'I') and makes the link with the seasons in Nature. Compare with Schema FMC00.0107. 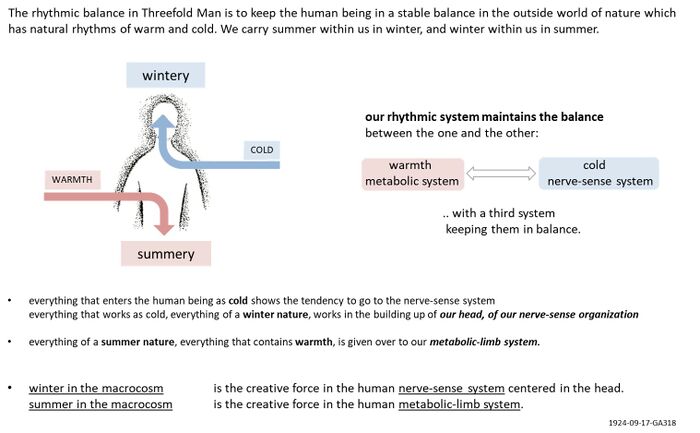 Schema FMC00.111 illustrates 'Man as an inverted plant', that is: how the three functional subsystems in Man (left) correspond to the same subsystem functions in a plant (right). See also Christ Module 6 - Principle in image and story

Man develops an independent etheric life towards the head because they raise that part out of both the zodiac and the movements of the planets. Then the astral body and the I enter and are able to take part in the thought and idea activity of the ether body. 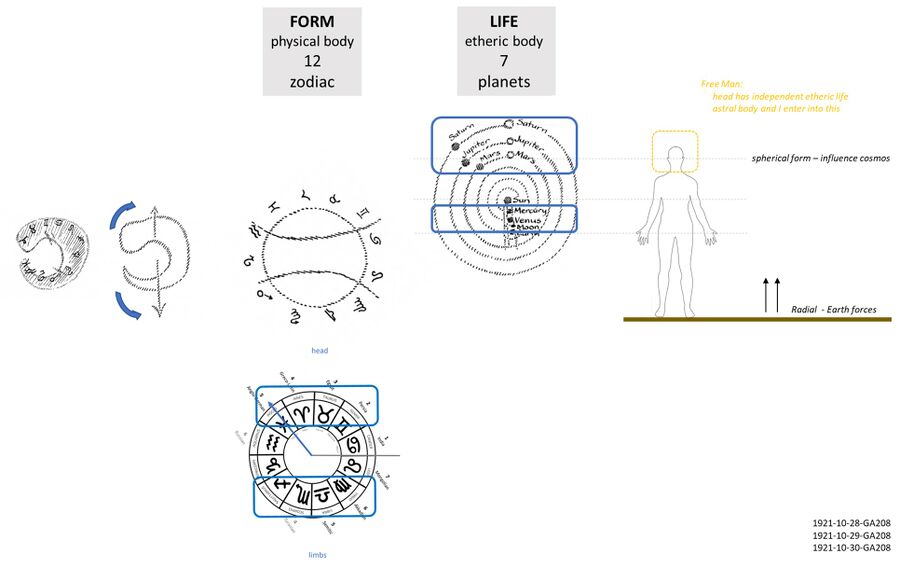 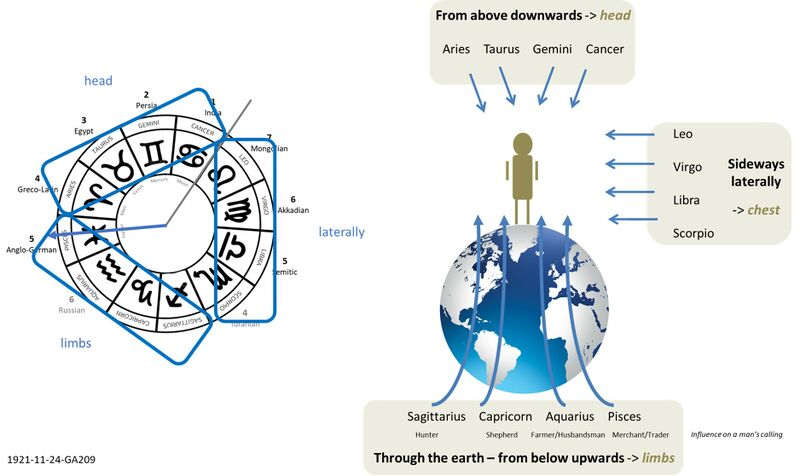 FMC00.260B shows the four groups of cosmic spiritual influences of Earth and the elemental world, the planetary spheres, and the fixed stars.

See the two diagrams on the left, showing the three realms as they manifest in Man.

On the right: The Diapason closing full in Man

The body is formed of food, hence of the four elements.

This inert matter is vivified by the soul, which is of another order of existence altogether.

The wonderful harmony of these two extremes is brought about by the Spiritus Mundi, the limpid spirit, represented here by a string. It extends from God to the Earth, and participates in both extremes. On it are marked the stages of the soul's descent into the body, and its re-ascent after death.

The three worlds are shown as concentric circles, marked on the left:

They correspond respectively to man's head, chest and belly, or on the mental plane to intellect, imagination and sense. 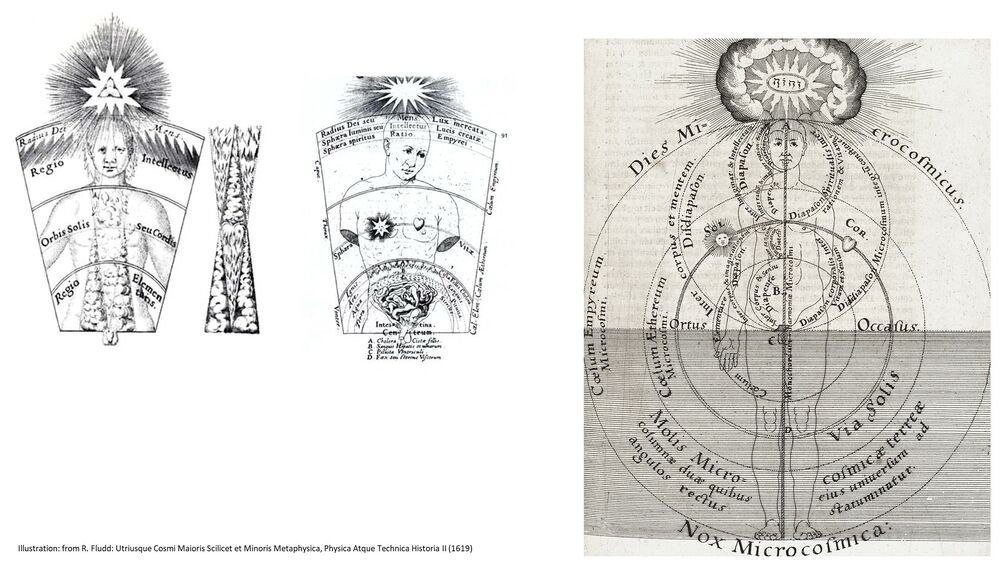 the head-formation is an outcome of the Old Saturn, Old Sun and Old Moon evolutions; whereas the limb-man is a starting-point for the Future Jupiter, Future Venus and Future Vulcan evolutions.

The human form is a most marvellous structure.

When we study the threefold human form in its relation to the Cosmos, we can say that man is shaped and moulded by cosmic forces but these forces work upon him in many different ways.

The changing position of the Sun in the zodiacal constellations through the various epochs has been taken as an indication of the different forces which pour down to man from the world of the fixed stars.

Even our mechanistic astronomy today speaks of the fact that the Sun rises in a particular constellation at the vernal equinox, that in the course of the coming centuries it will pass through others, that during the day it passes through certain constellations and during the night through others. These and many other things are said, but there is no conscious knowledge of man's relationship to the universe beyond the Earth.

o  Neither is there any knowledge of the fact that these forces are peculiarly adapted to work upon the human head in such a way indeed, that during earthly life man can unfold a certain faculty of self-observation, self-knowledge and consciousness of his own I.

o  During the Greek epoch, as you know, the Sun stood in the constellation of Aries at the vernal equinox. In the Greek epoch, therefore, Western peoples were particularly subject to the Aries forces. The fact of being subject to the Aries forces makes it possible for the head of man to develop in such a way that I-consciousness, a faculty for self-contemplation, unfolds.

o  In old calendars we frequently find the symbol of Aries, but very few people indeed realise the point of greatest significance, which is that the Ram is depicted with his head looking backwards. This image was intended to indicate that the Aries forces influence man in the direction of inwardness — for the Ram does not look forward, nor out into the wide world — he looks backwards, upon himself; he contemplates his own being. This is full of meaning.

Once again, and this time in full consciousness not with the instinctive — clairvoyance of olden times — once again we must press forward to this cosmic wisdom, to the knowledge that

We have thus heard how the human form and figure originate from the Cosmos.

Again in our time we must strive for a fully conscious realisation of man's place in the Cosmos. The form and shape of his physical body are given by the Cosmos. The upper part of his structure is a product of the Cosmos; the lower part a product of the Earth. The Earth covers those constellations which have a definite connection with his activities in life. Not until man's connection with the whole Cosmos is thus recognised and acknowledged will it be possible to understand the mysteries of the human form and its relation to earthly activities. And at the very outset the human form leads us to the zodiacal constellations.

describes how Man's three subsystems can be seen related to mammals, fishes and lower animals

Origin of the different systems of Man:

The three groups of zodiacal influences