In the period 1525-1879, archangel Gabriel performed preparatory work to gradually develop an organ in Man to receive the message of archangel Michael. This newly acquired organ is a gland in the brain above the root of Man's nose, and can be used to take in and let spiritual scientific knowledge work on Man's etheric body.

This organ will develop in the future to faculties of clairvoyance and memory of earlier incarnations. If the organ is not used by people, it will give rise to terrible epidemics and nervous diseases far worse than any yet known to Man. (1913-05-01-GA152).

Schema FMC00.353 is a study schema that positions the physiological process underlying the study of spiritual science and initiation exercises, through the use of the newly developed organ in the brain called the pituitary gland and the process working on the etheric and astral bodies.

Regarding the drawing with arrows on the lower left, see the quotes by Blavatsky who writes that (freely rephrased) "once kundalini is active in the heart, that power rises to the sixth region in the brain and the place between the eyes, this is the opening of the third eye".

Compare with Schema FMC00.044 on Etherization of blood. 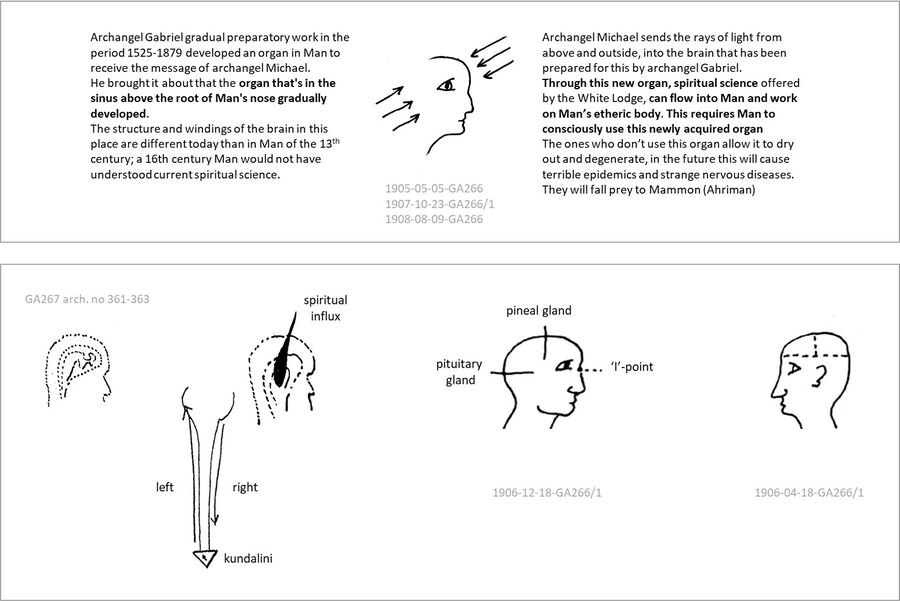 The I is not just a point that has gradually united [with the physical body] through the growth of the front part of the brain and the entry of the etheric body into the area above the root of the nose, but there is also a second point [in front of it]. The connecting line to this point changes, the direction of this line points to the center of the sun. The more Man develops, the more these two points approach one another. Humans who are developing must place themselves in this second point, that is, outside, and must learn to look at their body as to physical external to themselves (Tat tvam asi [= That is you]); that redeems Man from egotism. A lively recalling and experiencing of the Mystery of Golgotha ​​and the fact that there the superfluous, egotistical blood of humankind flowed there, is a help to this end.

Distinction must be made between the inner progress of the ‘I’ and the astral body from incarnation to incarnation, and the outer progress and change in the physical and etheric bodies from one race to another, from one nation to another, from one epoch to another. This progress of the physical and the etheric bodies from one age to another would not be perceptible to those who study anatomy and physiology, but it happens, nevertheless, and can be recognised through occult science. The human physical body will be quite different when, in the normal course of evolution, our souls appear again on the earth in future incarnations.

In the present age of human life a delicate organ is being developed in Man. It is not perceptible to anatomists and physiologists, yet it exists as an anatomical structure. This rudimentary organ is situated in the brain, near the organ of speech.

The development of this organ in the convolutions of the brain is not the result of the karma of individual souls but of human evolution as a whole on the earth; and in the future all men will possess it, no matter what the development of the souls incarnating in the bodies may be, and irrespective of the karma connected with these souls.

In a future incarnation this organ will be possessed by human beings who at the present time may be opposed to spiritual science [anthroposophy] as well as by those who are now in sympathy with it. This organ will in future time be the physical means, the physical instrument, for the application of certain powers of the soul; just as, for example, Broca's organ in the third convolution of the brain is the organ of the human faculty of speech.

When this new organ has developed it may either be used rightly by mankind, or it may not.

Those people will be able to use it rightly who are now preparing the possibility of having in their next incarnation a true remembrance of the present one. For this organ will be the physical means for remembering an earlier incarnation, which in the case of by far the greater majority of people is possible now only through higher development, through Initiation. But a faculty which in the present age it would be possible to acquire only through Initiation will later on become the common property of mankind. Our modern knowledge was formerly the special knowledge possessed by the Atlantean initiates only; everyone can now possess it. In the same way, remembrance of former lives on Earth is possible at present only for initiates but in times to come it will be possible for every human soul.

The initiate is able to attain certain knowledge without the use of a physical organ, but this knowledge can become the common property of mankind only when a physical organ through which it can be acquired is developed in mankind as a whole in the course of evolution.

The reincarnated souls must, however, be able to use this organ in the right way and only those who in the present incarnation have inscribed occult thoughts and ideas in the akasha-substance will be capable of this.

When we are living in a future incarnation we shall only be able to remember those that are past if we can grasp the true nature of the soul which continues from one incarnation to another. A Man who does not study occult science in the present life can acquire no knowledge of the constitution and nature of the soul, and if he has no such knowledge, how should he, when he is again incarnated, remember that to which he never gave a thought in the earlier incarnation?

Through the study of spiritual science, which includes, among other things, the study of the intrinsic nature of the soul, we prepare in ourselves that which will enable us in a future incarnation to remember what happened in the present one.

There are, however, many people nowadays who are not willing to devote themselves to the study of this knowledge. These human beings will be reborn, perhaps in their next incarnation, with the above-mentioned organ for the remembrance of former lives physically developed; but they have not prepared themselves in such a way as to be able to remember the past.

What, then, is the significance of spiritual science in the life of the present day, in addition to all that has been said?

Through spiritual science we become able to use in the right way the organ that will be developed in human beings of the future, the organ for the remembering of former lives on Earth. In our present incarnation we must inscribe in the akasha-substance the knowledge we acquire in order that in our next incarnation we may be able to use this organ, which is developing in Man whether he wishes it or not.

In the future there will be men who are able to use this organ for remembering past lives and others who are not able. Certain illnesses will appear in the latter, owing to the presence in their physical bodies of an organ which they are unable to use. To have an organ and be unable to use it gives rise to nervous diseases in a very definite form, and those that will be caused in cases of this kind will be far worse than any yet known to Man.

For a long time to come it will still be possible for a human being, even if he has neglected to use this organ in the present life, to put this right in the next, for there will be several more opportunities for him to regain health and acquire spiritual scientific knowledge. The time will come, however, when this possibility will cease.

[on experiencing form and substance]

Now together with all else that was taught to the pupils of that little circle, there was one special and definite teaching. It was shown to the pupil how when he makes use of the organ that is really an organ of smell raised up into the astral light, then he learns to know the true substance of all things, he learns to know Matter. And when he comes to a knowledge of the inside of his bony system, and thereby learns to know the true and authentic World Geometry, to know the way in which the forces have been inscribed into the world by the Gods, then he learns to understand the Forms that work in the things of the world. Thus if you would learn to know Quartz in its substance — so it was said to the pupil — then look at it in the two-petaled lotus-flower. If you would learn to know its crystal form, how the substance is given shape and form, then you must apprehend this form out of the Cosmos with the power of apprehension that you can gain by living experience of the inside of the bony system.

In the stream that came from Greece to Europe the abstractness with which these things were set forth in books was enough to drive one to despair; this went on throughout the Middle Ages, and in still more recent times has gone from bad to worse. But if you go back to Aristotle, you find that, with him, Forms really lead back to the experience I described, you find with him the true insight into things that is able to see in every head that which he calls the Matter or Substance in the things. This insight possessed by Aristotle was the aspect of his teaching that was carried into Asia.

But now the inner knowledge — that is to say, the knowledge that is in accord with the Akashic Records — the inner knowledge of the philosophy taught in Greece, points us to something of which I could naturally only give quite an external indication in my Riddles of Philosophy, where I showed how Aristotle held the view that in Man, Form and Matter flow into one another; in Man, Matter is Form and Form Matter. You will find this where I am speaking of Spirit in Riddles of Philosophy.

Aristotle himself, however, taught it in quite a different way.