Man's constitution can be viewed from various perspectives:

The two first dimensions represent a matrix view to understand Man in the interrelationships between 'bodily principles' and 'functional subsystems'.

It allows to make a matrix view to integrate the two above and not get locked in to narrow one-dimensional thinking.

Furthermore to be superimposed are:

Finally there are the evolutionary aspects of Man past and future

Schema FMC00.151 shows the four bodily principles of Man (physical, etheric, astral and 'I') over which are drawn the processes that take place in the three subsystems (sense-nerve, rhythmic, metabolic-limb), here from an angle of perspective of a Carbon, Oxygen, Nitrogen and Hydrogen process.

FMC00.015A shows threefold Man and how the three main intake processes lie at the basis of Thinking, Feeling and Willing (TFW). It shows also how the subsystem processes are linked (green arrows), and how at each stage part of the etheric flows is stopped et the exhalation stage (red line).

Furthermore the schema allows to contemplate Man: an integrated view with the matrix linkeage between fourfold Man (above, re the four elements) and the Man as a threefold being (below, with three subsystems).

For the workings of the metabolic-limb system, which is not fully explained in the lecture 1924-GA318 lecture, take this schema together with Schema FMC00.412 on Metabolic-limb subsystem. 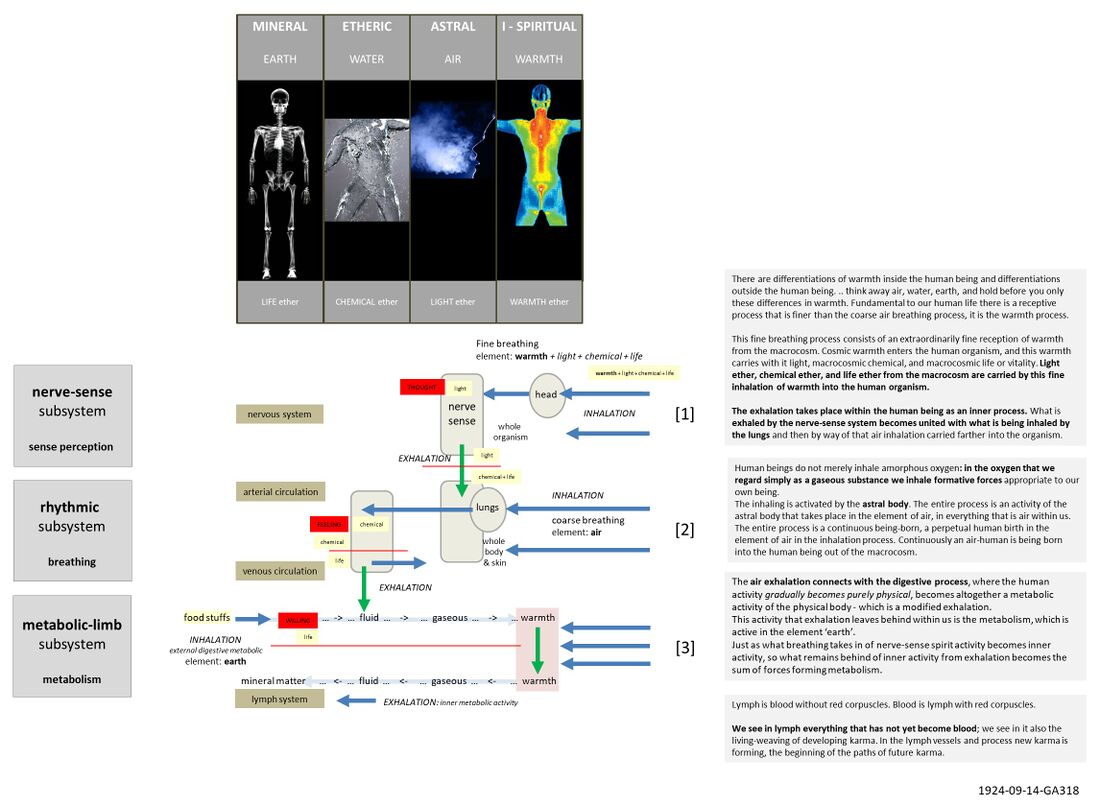 Schema FMC00.415 shows the physical body as a structure that embeds and hosts all other Man's bodily principles, and hence has a specific organization for each of them as part or subset of the physical body. If a new principle is added, as the human 'I' in the current Earth planetary stage of evolution, then this new principle has to be interwoven in a balanced and correct way. This is done over the various epochs and cultural ages, and because it is so complex offers many ways for this development to go wrong (see eg the sixteen paths of perdition), as explained in the lectures of 1917-01-01-GA174B and 1917-01-14-GA174B. See also Schemas FMC00.036 and FMC00.338 on I-organization.

Schema FMC00.158 shows how the four temperaments are related to a dominant bodily principle, and find its expression in both external (physical and facial appearance and movement) and internal ways (character) 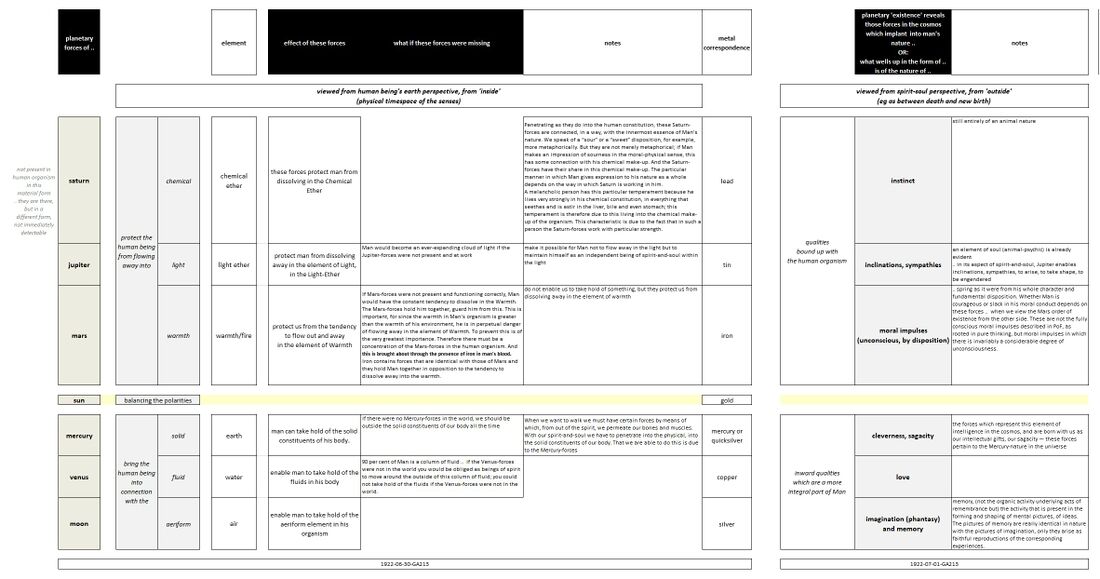 Schema FMC00.155 sketches how Man is traversed by spiritual beings from Moon, Mars, Venus in circulating lymph and chyle fluids, and how Saturn beings take their abode in Man's sensory perceptions. Chyle, lymph blood are also called the three bodily humors as it existed in ancient Greece and the cultures before, and that based itself on liquids for health treatment.

The integration between the various perspectives is embedded in the broad coverage of Man - the human being, and there is no specific lecture cycle that covers the linking of these various perspective dimensions. However, in a number of lectures this is the central theme.