Transition between Earth and Future Jupiter

The Earth rounds perspective provides a view on the Conditions of Life and Form (CoL, CoF) after our current fourth mineral CoL and CoF will have concluded with the Seventh Epoch. See Schemas FMC00.057B and FMC00.298.

This is relevant because as Man spiritualizes, humanity will develop further beyond the purely mineral. In the Book of Revelation the next CoF corresponds to the seven bows or vials - see Schema FMC00.258.

At the end of Earth evolution, there will be Unification of the human race by Christ before the pralaya and transition to Future Jupiter. The Christ will be like a group soul made up of all compressed spiritual fruits of all previous incarnations of all human beings, that is: the collective of all spiritualized higher selves (see Man's higher triad) that were spiritualized, will be united into a spiritual body. (1914-07-16-GA155 below, and see also Unification and Second Adam).

A critical phase for the above to happen is referenced with the so-called Father impulse in the Sixth epoch, see notes to Schema FMC00.370 below.

FMC00.298 is a synthetic table with descriptive quotes from various lectures on different aspects of the Earth's CoL (and CoF). Click to enlarge. 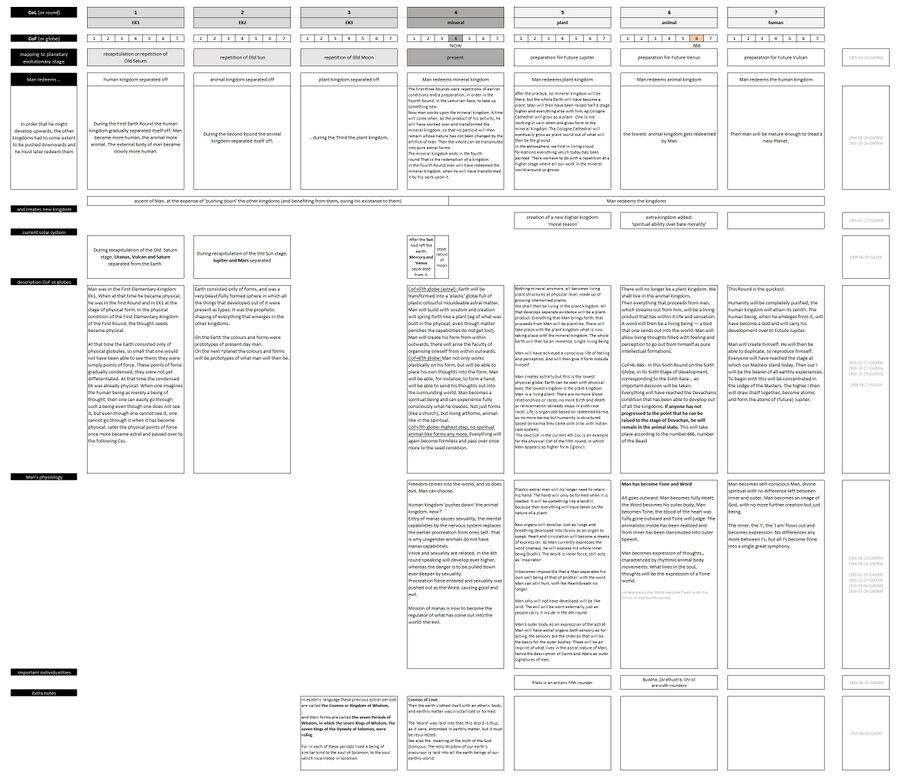 Schema FMC00.370 shows 'the big picture' of the development of humanity between the third and sixth epochs.

Below [in blue] the three major impulses (FMC00.185), with the descent of Man in the Lemurian epoch (into physical incarnation and gender), and [under the timeline in grey] the slow development of the sentient, intellectual and consciousness soul in the Lemurian and Atlantean epochs as a gift of the Spirits of Form (FMC00.046 below). As part of that [in red] the Luciferic infection with following Ahrimanic and Soratic influences.

Also [below in yellow] the Three pre-MoG interventions of Christ to steer the balanced development of the I across Man's bodily principles. Then, in the current epoch [see vertical light grey lines] the refined sentient, intellectual and consciousness souls in three cultural ages. This development was supported with the Krishna impulse and the Being of Elijah. Central in the whole development: the Mystery of Golgotha (MoG) and the resulting changes in the age of the consciousness soul. See oa FMC00.167 and Schema FMC00.013 on Transition between 4th and 14th century.

The resurrection at the MoG caused the start of the Second Adam development of future spiritualized humanity with Christ as group soul. The second apocalyptic seal illustrates this (FMC00.348) with the Mystical Lamb being the future group soul for humanity that originates from the group souls of humanity (FMC00.283 and FMC00.181).

Hence, the schema depicts the individuation from humanity in stages. For the reference to the three cultural ages of the Sixth epoch, and the Father impulse, see the Book of Revelation 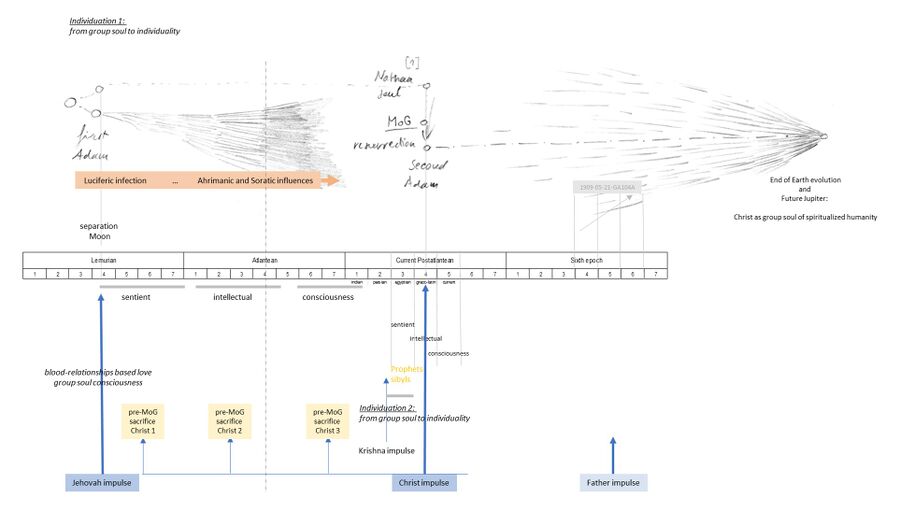 Schema FMC00.258 links the structure and chapters of the Book of Revelation 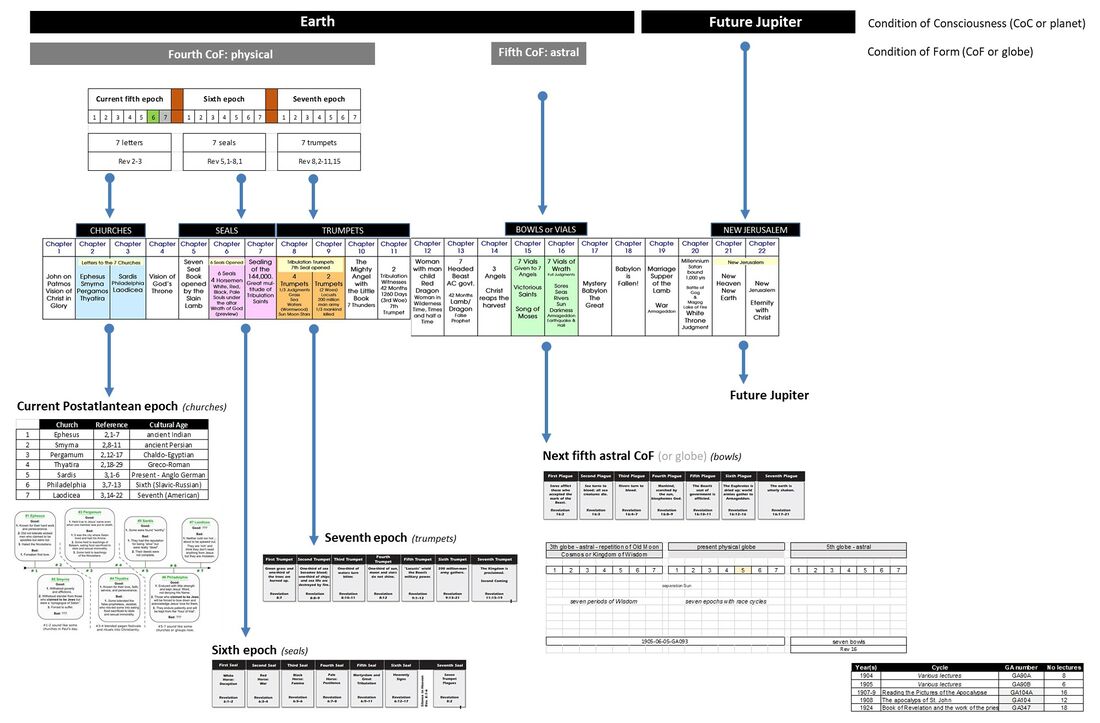 In his writings on the Phantom (Ch 5.), Maximilian Rebholz writes:

And this process of reunification continues through the fact, that at the end of earthly evolution, the Christ will unite all these thought-phantoms, which surround the earth as "spiritual haze structures", into a single form, from which - after passing through the Pralaya - the archetypal image of Future Jupiter would appear.…

and he quotes from

and at the end of the ages the remains of our Earth incarnations will stand there … all the phantom-like beings… like a mighty tableau. … and what do they come to, taken as a whole? Because Christ unites them all … the remains of the single incarnations are all compressed together. … Compress what is rarefied and you will get density. Spirit also becomes dense, and so our collective Earth-incarnations are united into one spiritual body.

Here follows the extract of that lecture, well worthwhile to study and contemplate:

At the end of the Earth period .. .. at the end of the ages the remains of our Earth incarnations will stand there like a mighty tableau if we have not taken into us the living Christ.

Because Christ unites them all — Christ who belongs to all mankind in the present and in the future — the remains of the single incarnations are all compressed together. Every human soul lives in successive incarnations. From each incarnation certain relics or remains are left, as we have described. Further incarnations will leave other remains, and so on, up to the end of the Earth period. If these relics are permeated by Christ, they are compressed together. Compress what is rarefied and you will get density. Spirit also becomes dense, and so our collective Earth-incarnations are united into a spiritual body. This body belongs to us; we need it because we evolve onwards to Future Jupiter, and it will be the starting-point of our embodiment on Future Jupiter. At the end of the Earth period we shall stand there with the soul — whatever the particular karma of the soul may be — and we shall stand there before our earthly relics which have been gathered together by Christ, and we shall have to unite with them in order to pass over with them to Future Jupiter.

See also IAO for another perspective of what is described here.

It is one of the many meanings of the Mystery of Golgotha that with the Christ spirit something was given to the Earth that, when rightly understood, makes the name 'human being' again applicable to all earthly humanity. The real substance of Christianity, which has already been partially revealed through its teachings, will be explored by those who, in regard to Christ, seek in the spiritual world what Christ is continually revealing in accordance with his words: “I am with you always, to the close of the age.”