This module focuses on:

This is why this module is called the 'cosmic dimension'. The above statements are mind-boggling when one projects an image of the cross at Golgotha in purely human terms. These statement forces one to switch gears, and to consider Christ-Jesus not as a man but as a divine being, to realize a cosmic event happened at the Mystery of Golgotha.

The meaning of the Mystery of Golgotha and Christ Impulse was unveiled by Rudolf Steiner's explanatory lecturing for our age, as elaborated in the Study Modules. This module is the final of the first seven that carries over in the next seven that continue on other as well as more advanced aspects.

The life of all this earthly realm becomes clear and transparent when we feel at its foundation the germ of a new universe. Every single plant and stone appears in a new light to the soul of Man, when he becomes aware that each of these creations is contributing by its life or by its form to this great fact: that the Earth in its unity is an embryo — the seed of a macrocosm newly rising into life.

The module study work and process

As with every module, the intention is for the student to develop an imaginative picture, not just grasp the topic with an intellectual understanding.

Schema FMC00.165 illustrates visions from the place where the cosmic center was created in a mundane environment of ignorant human beings. Only initiates knew and realized what was happening at Golgotha. Note: Emmerick and Neumann received their visions as part of their process of living with the stigmata. 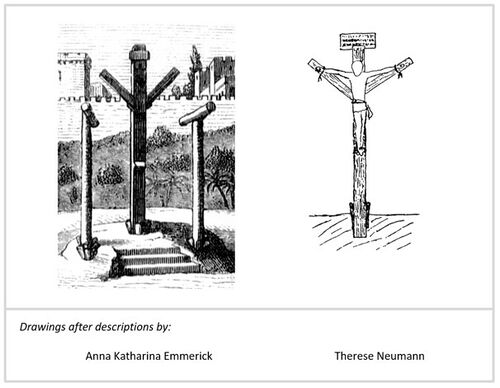 Schema FMC00.187 is essential and comes from the key lecture put forth for the study of this topic. 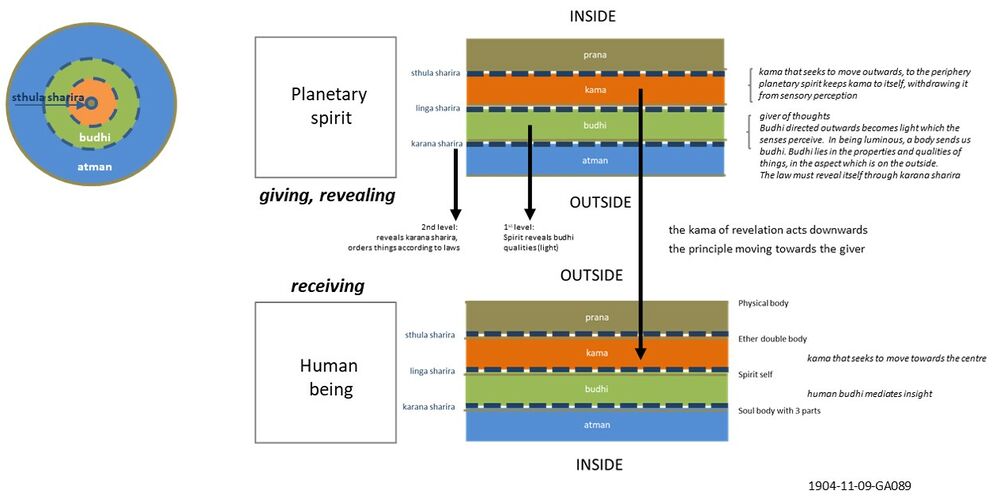 The following sequence 'rolls off' the above schema and develops it in a few steps.

FMC00.187A is to sketch the base concepts and how they relate: 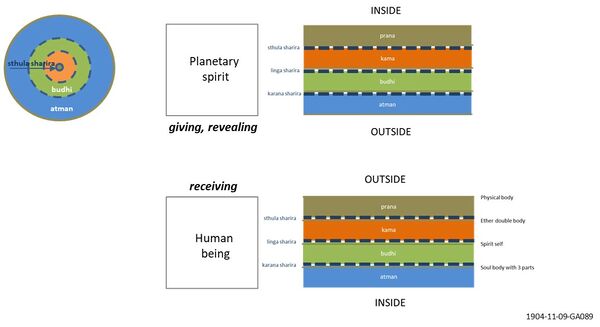 FMC00.187B illustrates the key relation between giver and receiver: 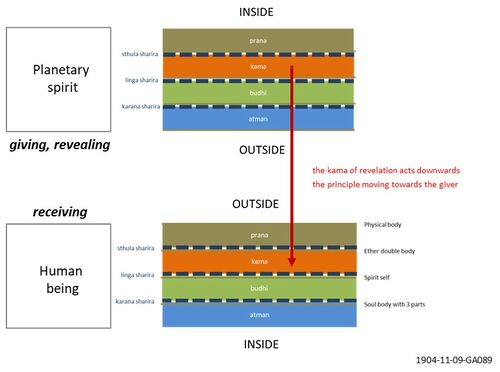 FMC00.187C further details how this happens: 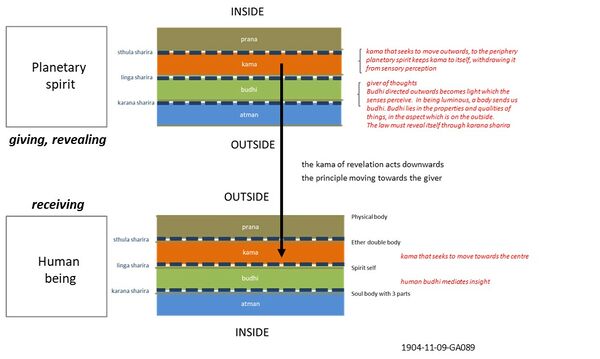 and FMC00.187D focuses on the shining of budhi outwards: 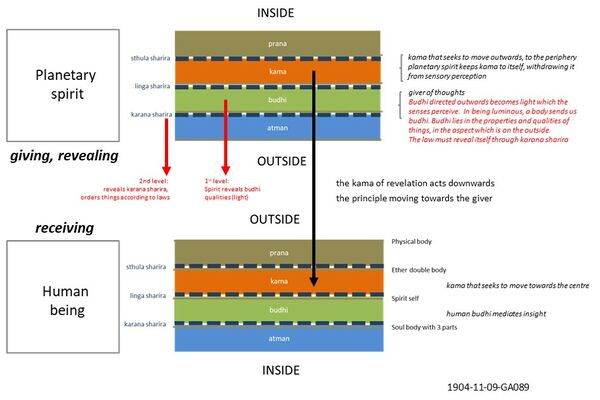 Schema FMC00.187E illustrates with the original notes that were checked, for reference 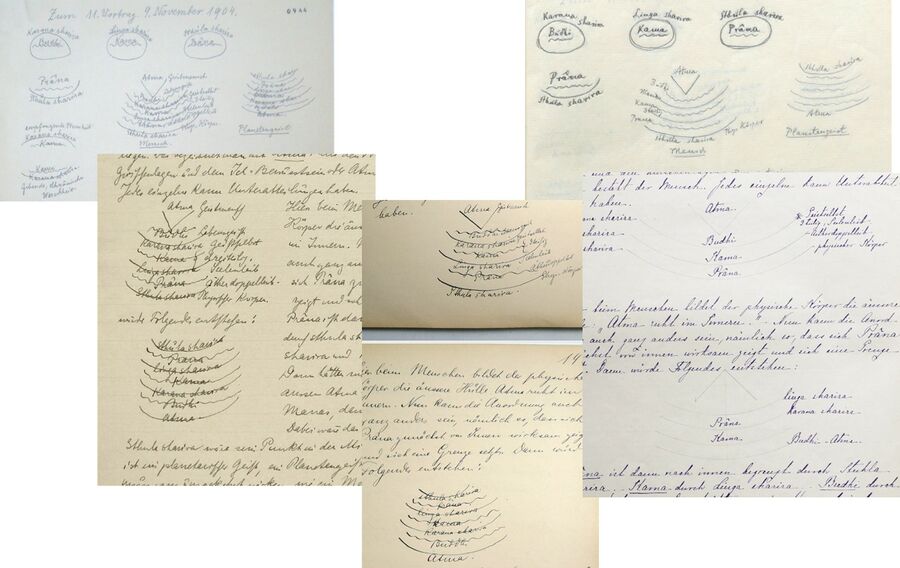 Schema FMC00.188 depicts how 'another center is created' by people who share ideals. This is a more 'technical' spiritual scientific explanation of how human beings that come together in the spirit of higher ideals, create something at a higher level that surpasses their Individualities and has a cosmic impact as it starts shining back from the center that gets thus created (see lecture and also Schema FMC00.266 below).

An illustration of such can be seen in the German idealism, see for example the illustration with the network of some important souls (that carried this idealism) in Schema FMC00243 on Goethe. However this is also important for group work in communities, see Communicating over spiritual science. 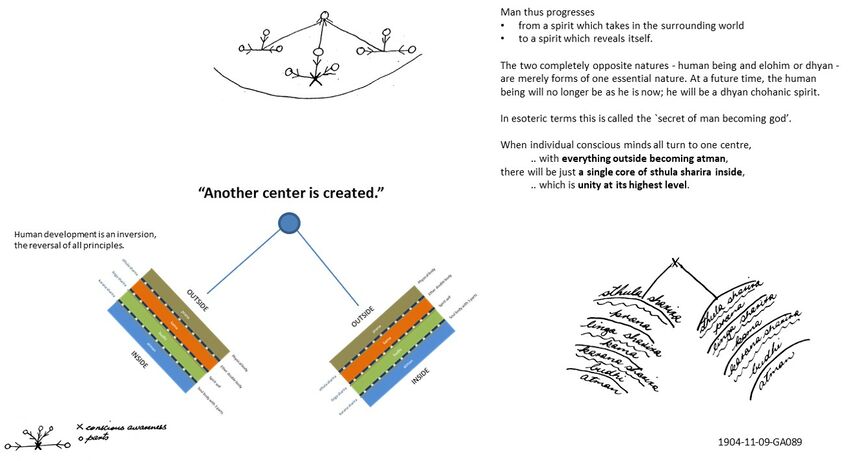 and again Schema FMC00.188A shows the base materials checked, for reference. 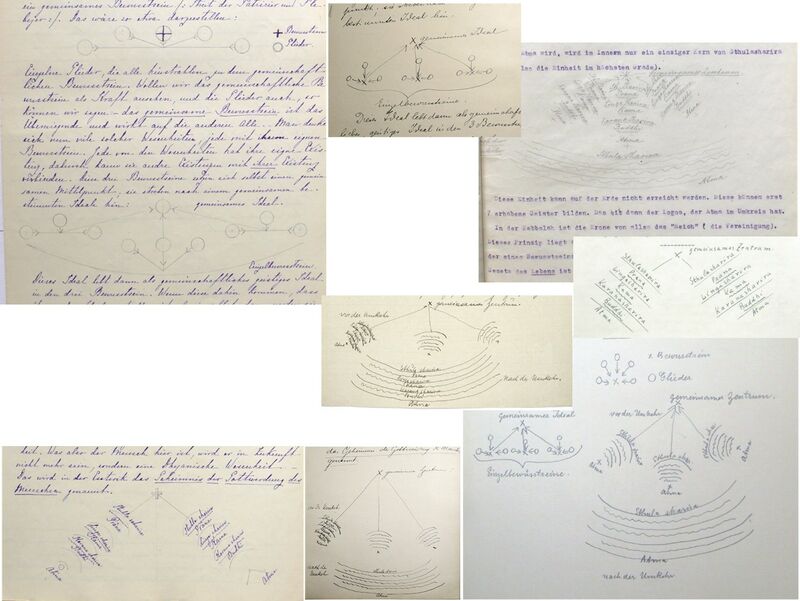 Schema FMC00.266 shows (see 1920-12-18-GA202 below and on Threefold Sun) how the spiritual Sun [1] works on Earth and Man [2], but that Man radiates this morality out into the cosmos [3], and after a certain distance is reflected: "the physical sun is only the seemingly physical appearance of a spiritual mirroring" [4]. 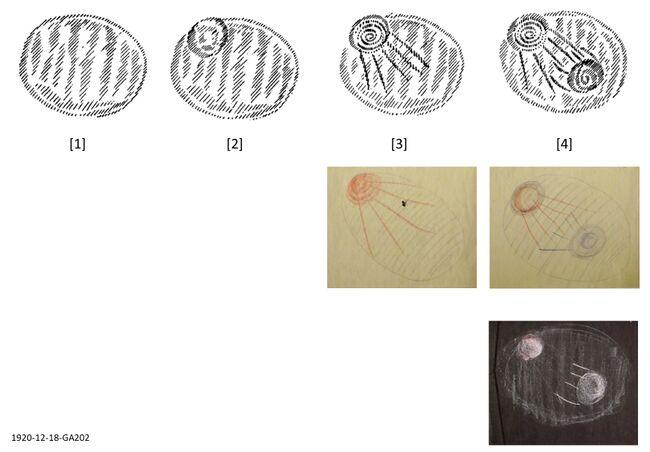 Schema FMC00.191 depicts three BBD drawings of the symbol of the transubstantiation: the shining, like a small Sun, in the sanctissimum wherein the host is carried on a crescent cup.

Today every sanctissimum or monstrance in the Mass shows the rays of the Sun, but the connection of the Christ with the Sun and the reality behind the symbol have been totally lost. (1924-07-11-GA237)

See more on: Cosmic breath of Brahma and relate this to Schema FMC00.329 on IAO 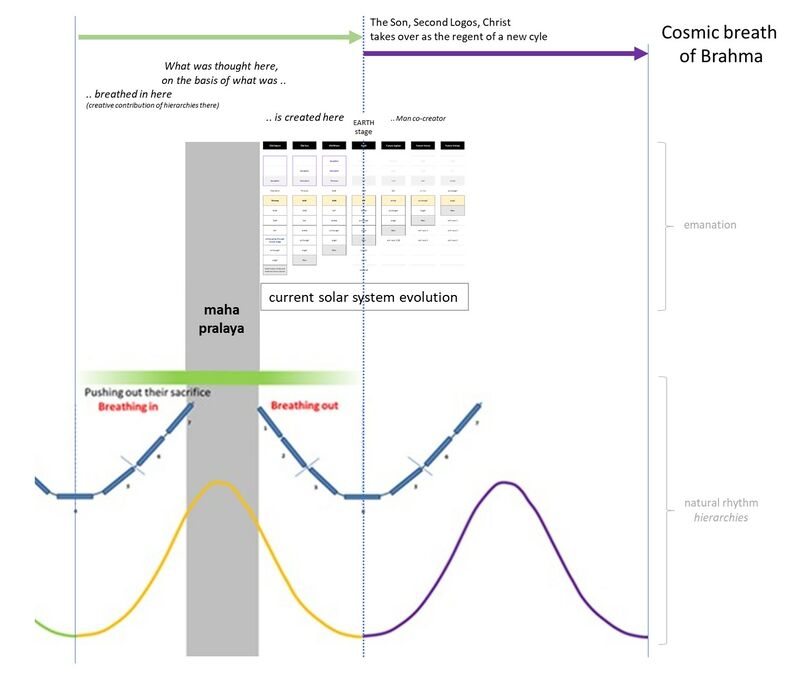 The fact that the astral aspect of the Earth changed when the blood dripped from the wounds at Golgotha, appears in:

Through the fact that the Christ-being took possession of the three bodies in which the ego-being of Jesus formerly abode, a Being was bound up with the earth that had earlier had its dwelling-place on the sun.

It had formerly been bound up with the Earth until the moment when the sun departed from the Earth. At that time the Christ also departed, and from then on he could exercise his power upon the earth only from outside, in the moment of the baptism, the high Christ-spirit again united himself in the full sense with the Earth. Formerly he worked from outside, overshadowing the prophets and working in the mysteries. Now he was actually incarnated in a physical human body on the Earth.

If a being had been able to look down for thousands of years from a remote point in the universe, such a being as could see not only the physical Earth but also its spiritual streams, its astral and etheric bodies, it would have seen significant events

The Earth's astral body was profoundly changed thereby. At this moment it took up something different; it took on different colors. A new force was implanted in the Earth.

What earlier had worked from without, again became united with the Earth, and thereby the attractive power between sun and earth will grow so strong that sun and Earth will again unite, and Man will unite with the sun-spirits. It was the Christ who gave the possibility that the Earth can again unite with the sun and be in the bosom of the Godhead.

a new center, a new start was created

radiates back and streams into space - force will form spiritual sphere surrounding earth, composed of those etheric bodies endowed with light, in process of becoming a Sun.

In 1906-08-31-GA091 describes how when Man transforms warmth into love his astral body begins to transform and light and love gets united with wisdom (Lucifer), after which physical and etheric body can be interchanged. This not only is relevant for the 'redeeming Lucifer' question, but also for the (resurrection body'.

The chemical and life ethers

discusses how with the departure of the Sun in the Hyperborean epoch, the spiritual part and higher ethers left also. The Life Ether was called Honover in Persian times, in the Gospel of John it's called the Logos (as the 'meaning-filled tone belonging to the Being of the Sun')

We have therefore on the earth — warmth, air or gaseous substance, water or fluid substance, and solids or earthly substance. Opposed to these as finer conditions we have light-ether, tone-ether, and life-ether, this last being the finest etheric condition known to us..

Now with the departure of the Sun from the Earth, not only the material part of the Sun left but the spiritual part left also. It was only later, and by degrees, that this returned to the earth, and it did not return entirely.

That which as organizing quality lay here at the foundation of a new kind of fellowship is contained in the Life-ether, which organizes life, and which streamed into the earth in the Deed of Christ.

we read Death: Earth getting darker, like a solar eclipse but can also be clouds, lasted hours; Laying in the tomb: earthquake with whirlpool, afterwards there only like the clothes

A new center gets created

An example is the wonderful lecture 1906-09-13-GA091 with the title 'Das Weltenzentrum, Christus, Das Ich'. This is an example of a lecture (only published in 2018) that really belongs in volume GA097 on the Christ Mystery (GA097 already contains the lectures of of 2 and 15 september). Just a few phrases as example. With the new center reference is also made to the seed at the nirvana plane in the pralaya after the Earth's planetary stage.

.. he was flowing his life into the world, streaming into each person and giving him his power, to experience his true I and find the center to live in his I. ..

.. and when the whole of humanity has become an expression of the Christ, then that will represent the transition to a new step in world development. Then all powers that were in the world have been put out and used, and now these life forces can be involved in something new in the center of the world and a plan for a new cosmos. This new cosmos will stream out of this center in a new evolutionary stage, just like our current evolution has streamed out of a world center. The end of our Earth development is only the end of the outbreathing of God. Everything will be breathed in again in the center of the divine God, to find a new existence with the next outbreathing.

The impact on the kingdom of the dead

if there would have been a clairvoyant person as the blood an from the five wounds of the body of Christ-Jesus at the Mystery of Golgotha, he would have seen how Christ surged into the kingdom of the dead like a light arrow and transformed it from a kingdom of darkness into a kingdom of light

1 - The idea of 'a new center gets created' links to common ideals shared in groups, see the future groupings of souls in 1908-06-01-GA102 on Group souls of humanity

Rudolf Steiner also describes this in the context of conscious developments by secret brotherhoods (references to follow).

"The term in Oriental literature for what we call ‘etheric body’ is ‘Linga Sharira’. Thus it is an extract of Linga Sharira that Man takes with him from incarnation to incarnation."