The Symbolism of the Holy Supper can be organized in the following aspects:

Schema FMC00.020 gathers clues from various lectures stating that [1] each apostle represents a cultural age (or sub-race), [2] the first and last of the sequence of twelve is given, and [3] certain apostles are mapped to certain cultural ages.

Compare with Schema FMC00.092 on Development of the chakras 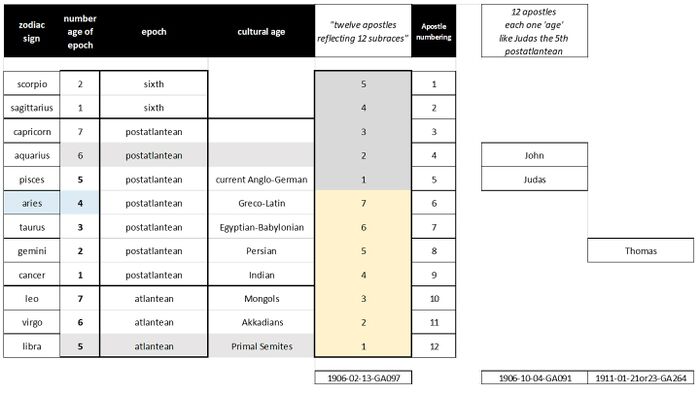 Schema FMC00.021A shows an attempt towards interpretation (by DL) of the symbolism of the apostles in Da Vinci's Last Supper painting. It includes FMC00.169A and FMC00.020 for ease of reference. This is continued with Schema FMC00.021B on Last Supper by Leonardo da Vinci 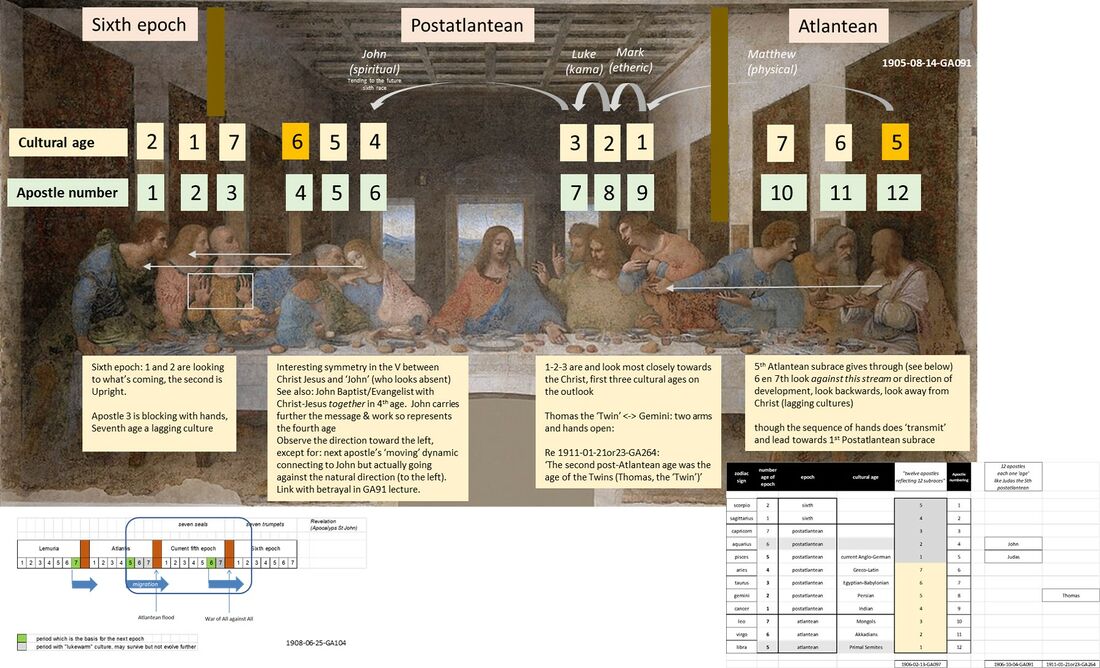 Symbolism of the twelve in initiation in ancient mysteries

A specific part of the old form of initiation consisted in the pupil being taken to the temple, and in a `three-day death', which meant that the ether body was also loosened and taken through astral and spirit world experiences. One of these was that every part of the body became a human figure. There were twelve parts, and the pupil would see twelve figures, with himself the thirteenth, the soul of the twelve.

The twelve apostles as members of the etheric body of Christ

The twelve apostles are the etheric bodies of Christ as a group soul, and Christ worked through them (1905-08-13-GA091 explains this on the basis of a twelvefold etheric body). It is described how Christ acted and spoke through the various apostles at different times, Jesus himself not saying so much or even not being around (1913-11-18-GA148).

Jesus is a single personality that have his physical body to Christ. The body of Christ are the twelve apostles and Christ really worked through them.

The following quote from 1908-10-29-GA107 puts the above in perspective. This quotes follows a description of the entry of the I into Man in the (last third of the) Atlantean epoch when the etheric body was still, to a certain extent, outside the physical body.

All the other members gradually developed out of a soft mass, so that we can say: Where was the human I then, in reality? Where was the present I? It was not really within man at that time but still in his environment. We can say: the upper members of man harden through the entry of the I's. Because the I was outside Man, it was still endowed with a quality which later became different. Through entering the physical body, the I was enabled to become an individual I, whereas before it was still a kind of group soul.

Let us consider such a circle of men in the Atlantean age; then the physical bodies sat thus around, but the I is only in the etheric body which is still outside. The I is thus to be found in front of each one. This I, however, has another characteristic. It is not so centralized. It develops, as it were, its forces and unites with the I's of the other men so that they form a ring which again sends its forces towards its centre. Thus we have here an etheric circular body which forms a unity in itself, and within it, the I's.

Thus there is a circle of physical bodies, and within an etheric circular surface, which forms a unity because the I's are caught up in it, and the single I is enclosed. Through this image we come to a pictorial idea of the group souls.

An opportunity to learn more about this is the feeding of the five thousand in the Gospel of Matthew and Mark, when Christ-Jesus expects the apostles to see the relationship between cultural ages (fourth and fifth, hence the feeding of the four and five thousand) and the zodiac constellations (seven day and five night) with the fishes as the dividing line between five and seven.

He reproaches them severely because they cannot understand the meaning of these revelations. Why does He do this? Because the thought was in His mind, “Now that the spirit of Elijah has been freed, he lives in you, and you must gradually prove yourselves worthy of his penetration into your souls, so that you may understand things that are higher than what you have hitherto been able to understand.” When Christ Jesus spoke to the crowd, He spoke in parables, in pictures, because there was still in their souls an echo of what had formerly been perceived in the super-sensible world in imaginations, in imaginative knowledge. For this reason He had to speak to the crowd in the way used by the old clairvoyants. To those who came out of the Old Testament people and became His disciples He could interpret the parables in a Socratic manner, in accordance with ordinary human reasoning capacities. He could speak to the new sense that had been given to mankind after the old clairvoyance had died out. But because Elijah's spirit as a group soul came near to the Twelve and permeated them like a common aura, they could, or at least it was possible for them to become in a higher sense clairvoyant. Enlightened as they were through the spirit of Elijah-John they could, when the Twelve were united together, perceive what they could not attain as individual men. It was for this that Christ wished to educate them.

The schematic below provides the relationships and references, more on this on the topic page for zodiac streams: seven and five

The twelve apostles also represent the twelve stations that humanity still has to go through, and the apostles can thus be mapped to cultural ages. Judas being the first, representing humanity having to fight egotism in the current fifth root race in the Postatlantean epoch.

We are now in the fifth root race of our earth existence. This has seven sub-races, the ancient Indian, the ancient Persian, the Egypto-Babylonic-Chaldean, the Graeco-Roman-Semitic, the Germanic, the Slavonic and the seventh sub-race. The last three sub-races of the fourth root race, which was the Atlantean one, were particularly important. From the third from last, the ancient Semitic race, has come the fifth root race. This sub-race dwelt in the region where Ireland is today. lt migrated from there, letting itself be guided to the Gobi desert or Shamo. This is the region where the present, the fifth root race originated. Three sub-races of the Atlanteans, seven sub-races of the Aryan root race and two of the sixth root race, belong together in some respect. When humanity has gone through all these races it will have reached a point where a great part of humanity will have achieved what it is meant to achieve.

In the parable of the vine, the Christ feels himself to be connected with all races; he provides them with the spiritual life blood.

Many different images also come into this in the higher world. We are told of Judas Iscariot's betrayal. He represents one of the races, the race which is now bringing everything down on to the material level, our own fifth sub-race, which is materialistic.

In the process of evolution in which humanity first lived in direct spiritual perception and then had to be taken into the physical world it was perfectly natural for the representative of this fifth sub-race to be the betrayer. Judas Iscariot represented the race that descends deeper than any other. The gospel of John continues to be valid beyond space and time for the very reason that it must be seen in symbolic terms. The act of Judas forms an organic part of the Christ's mission. Judas went through a form of martyrdom. He was the traitor and in a sense also a martyr. He brought about the sacrifice of the Christ. ..

.. The historical betrayal of the Christ was to happen in the future in the race of which Judas was the representative.

Christ is surrounded by twelve Apostles in whom we see the prototypes of man living side by side, co-existing in space.

In the ancient days of Earth evolution, the Moon-influence was closely connected with the Earth, and cared for its spiritual element, with the participation, direct or indirect, of the Bodhisattvas. Then, when the time was ripe, after the first third of the fourth Post-Atlantean age had expired, the effects of the Mystery of Golgotha, the working of the Christ, came in. This work of the Christ was surrounded by the twelve-fold activity of the Bodhisattvas, indicated — though indeed it was a reality — in the twelve Apostles. Thus the Christ, incorporated in the body of Jesus, is the power who, coming from spiritual existence in the Sun, has now united Himself with the Earth.