This is a Discussion topic page, to capture and share notes in support of an online discussion on the broad subject.

Schema FMC00.401 is a meta schema that pulls together various perspectives on the three main epochs in the process of the Individuation of the Human 'I' upto the Christ Impulse. After the initial impulse in the middle of the Lemurian epoch, the group soul process lasted upto the fourth age or root race in the Atlantean epoch. The three main epochs therefore are the 4th Atlantean, current 5th, and the next 6th epoch.

These different perspectives point to one and the same anticipated development timeline, and the below serves the discussion to lay these timings and perspectives next to one another and overlay and align them. 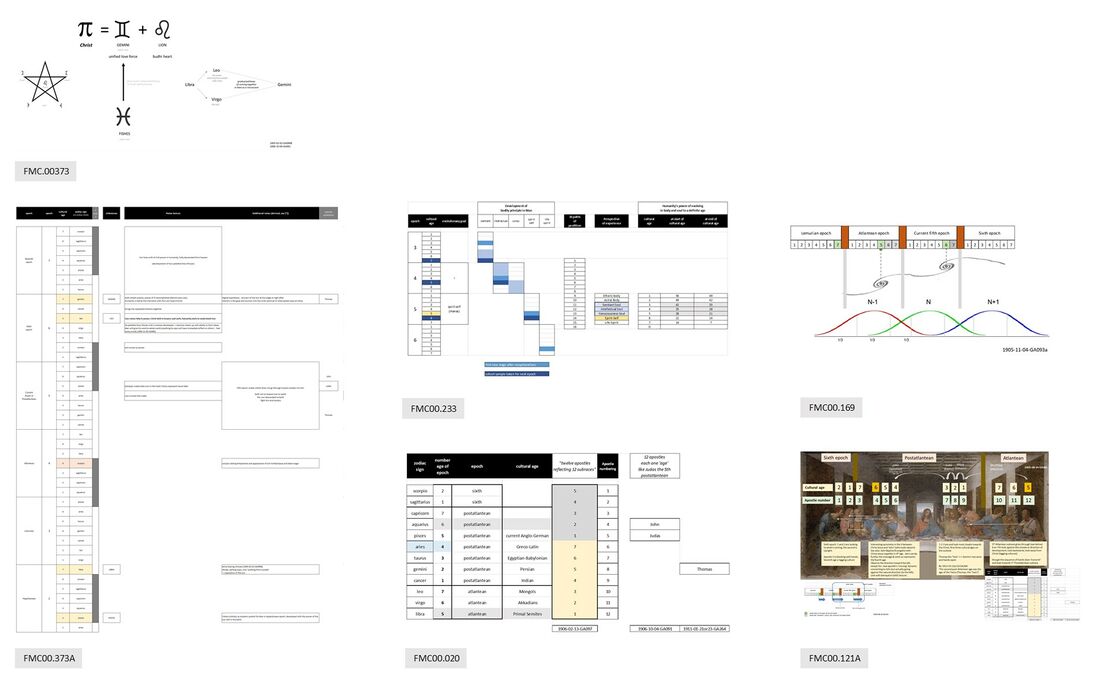 Schema FMC00.401A is slightly more complete, adding Schema FMC00.092 with the important timing of Man's clairvoyance and spiritualization linked to the 16 petalled lotus flower (throat chakra throat, larynx). That natural development would complete itself by the fourth age in the sixth epoch, leaving indeed the three last ages of that epoch as key ones (as is mentioned in Revelation lecture 1909-05-21-GA104A). 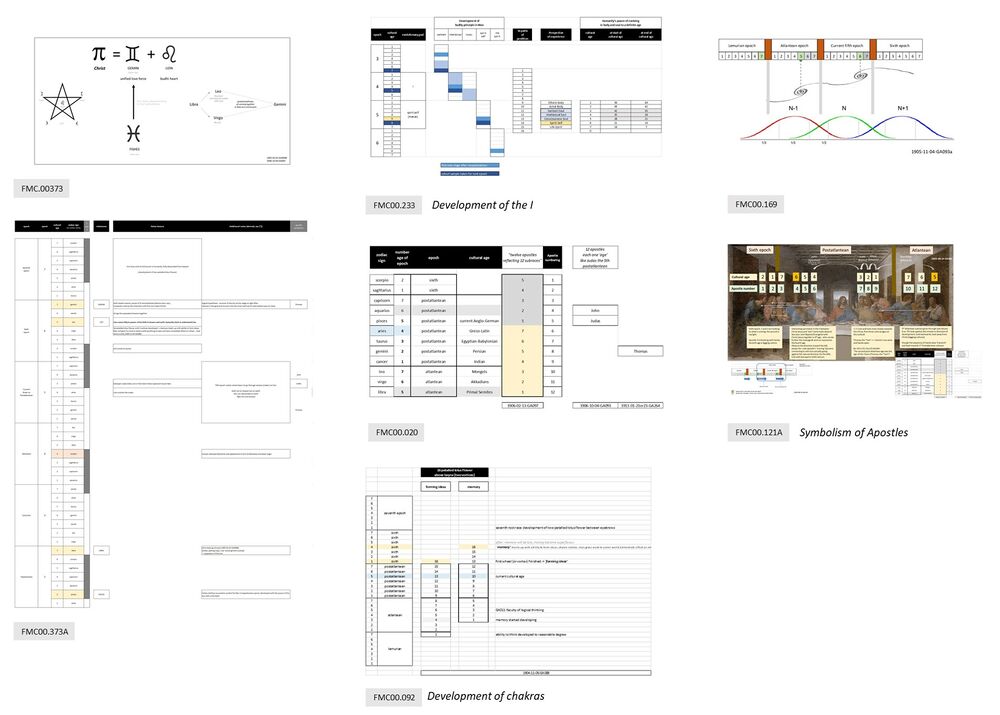 Schema FMC00.402 illustrates the white horse in the Book of Revelation. In 1904-10-24-GA090A this is called the horse Kalki, and is explained how this festival was celebrated since the ancient Indian cultural age and the time of the Rishis.

The divine being with a bow on the white horse is the son of God, who will come as a king (hence wearing a crown) to bring the revelation of what is in the book of the seven seals (see the two right illustrations). The horse with raised forefoot (see illustrations) will step with the forefoot on a snake, representing all of the lower nature that falls off. The upper right picture illustrates Rudolf Steiner's words. 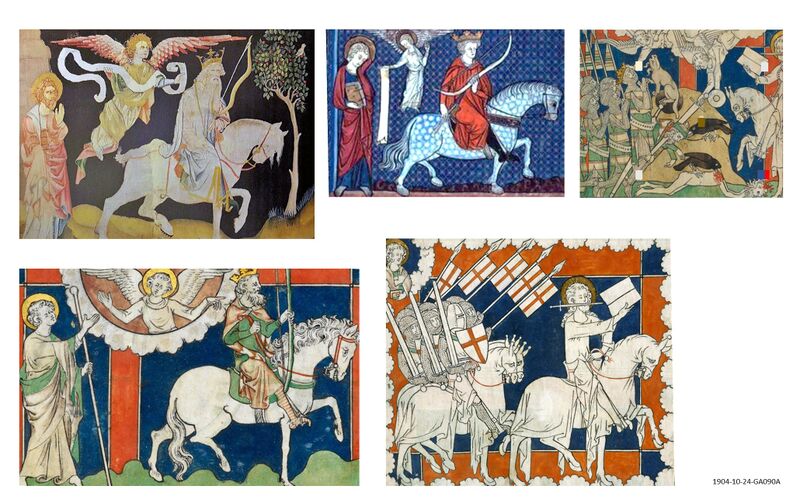 These are the ones who prepared the way for the eternal before it took the form of Christianity, and who have been transformed by the impetus given through Christ.

In the lecture is explicitly stated that the sixth seal brings the 12, and further described that

In the sixth epoch .. meteoric appearances will be awakened, that have materialised, and through which certain souls will spiritualize. [Note the literal phrasing is not as clear, it says "und die andern beginnen höher hinaufzusteigen", but from the context of the description and 1909-05-21-GA104A this is clear].

In the sixth epoch the four lower bodily characteristics will have been worked through in a very different way. The horses represent a recapitulative reworkn with more intense penetration with the soul. The three souls will be much closer connected with the three lower bodies. Leading to the attainment of the spirit-self.

explains the concept of 'father', the most advanced cohort of humanity, and states that, see p 365-366:

.. the part of humanity are not yet ready but only understand the word at the end of the current fifth epoch ..

.. regarding becoming 'father', reaching this stage: only a third of the population reaches the developmental goal at the end of the fifth epoch (a second third will reach this later) (72* 1/3 = 24). RS states that 72 of the elderly were called to step into this process of development, and so only 24 of the elders will be there when the seven seals are opened.

extract on the fact that only a third of the population achieves the developmental goal:

Again something of particular significance comes to pass in evolution. We are told what conditions will be when the Fifth epoch has progressed, to the point where it must be decided whether the time has come for the transition into the Sixth epoch. ...

The coming of the Sixth epoch is announced by the sounding of trumpets.

This refers to the third part that has remained behind, which however, need not have happened. The Letters to the Communities contain not only warnings and admonitions but also sharp reproof.

Not all reach the goal. A third part (of humanity) falls away completely from evolution.

We have therefore one third which will attain the goal, one third which lags behind, and one third which does not reach the goal and falls completely away. One third attains its goal, a second third will only later attain its goal, making together two thirds; and at the end of the fifth epoch, only one third of those who began evolution will have reached the necessary stage of development.

Seventy-two Elders were called upon to enter into evolution and to develop to further stages. The admonitions to the Communities which it devolved upon the Elders to lead, indicates that only a third reach the goal. If we take a third of 72 Elders, we have 24 Elders who will still be there when the seven seals of the Book are opened.

In the [epoch of the seals] something like a shower of meteorites will occur, caused by increasing materialism, and some human beings will ascend to a spiritual state. What these spiritualized human beings will have acquired through their efforts in the Postatlantean epoch will completely permeate them from within.

Because they have worked on their development they will be able, in the fourth, fifth and sixth ages in the epoch of the seals, to use the three soul forces (sentient, intellectual and consciousness souls) to permeate and work on themselves in order to take in manas.

.. human beings will have permeated the three with four ..

Twelve times 12.000 gives the number 144.000. These are the people who will constitute human society in the age of the sixth seal.

[Christ represents] .. as fusion and at the same time a rebirth of all former spiritual streams of humanity. In him the earlier streams are born anew in an enhanced degree.

Or, the 12 x 12 groups, the twelve groups that will be matured in terms of spiritual development