Luciferic beings and their influences

The Luciferic principle originated during the Old Sun planetary stage at the level of the Cherubim, but this principle cascaded down to the lower hierarchies. Luciferic beings are a class of spiritual beings at every level of these spiritual hierarchies, 'lagging' versus the normal development.

The development during Old Moon also influenced the Spirits of Form, and this influenced Mankind during Earth whilst the human I was being established in the Lemurian epoch.

Lucifer represents the bringer of freedom and own identity, as well as the bringer of light. With Light is meant physical light, whereas Christus brings spiritual light.

Origin of the Luciferic principle on Old Sun

Schema FMC00.019 below depicts schematically how during the Old Sun stage, certain Cherubim did not accept the sacrifice of the Thrones and this way wrestled themselves free and became more independant.

It illustrates how the Luciferic 'class' of the hierarchies are a totally naturally part of, or spawning off from, the overall evolutionary process .. like a kind of side-effect. 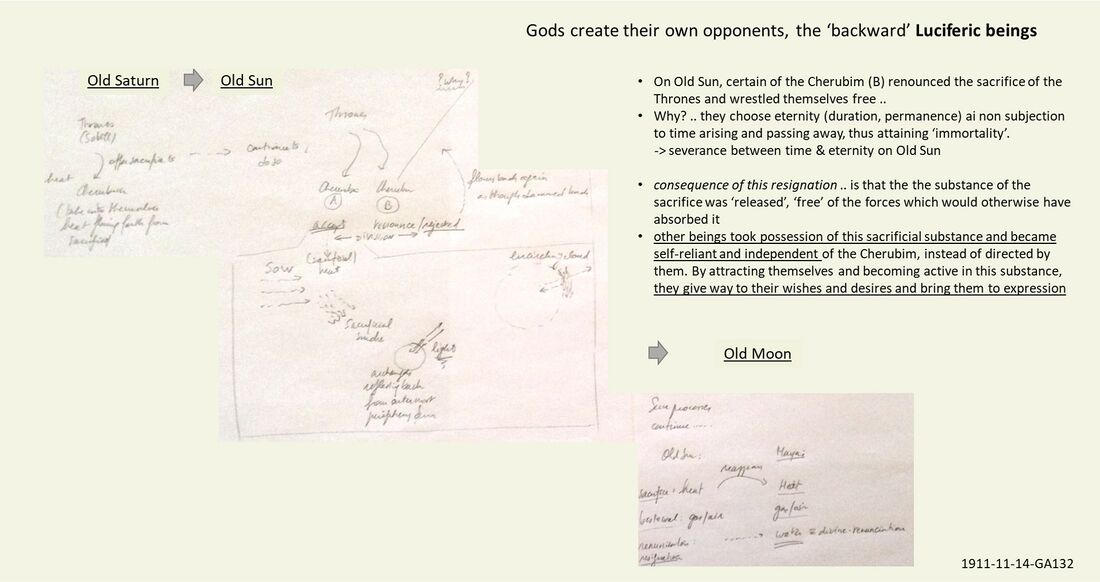 Retrieved from "https://anthroposophy.eu/w/index.php?title=Luciferic_beings_and_their_influences&oldid=3923"
Category:
This page was last edited on 22 June 2020, at 22:17.
Privacy policy
About Anthroposophy
Disclaimers