Lucifer and Ahrimanic influences are to be seen in a broader context of 'counterforces' or spiritual influences that are opposing or side tracking Man's development. They are two polar force-fields or influences that pull into different directions, whereas the Christ represents the balanced middle ground.

The Luciferic influence needs to be seen in an evolutionary context, starting on Old Sun, when a certain class of Cherubim renounced the sacrifice of the Thrones and thereby wrestled themselves free and independant of the normal stream of evolution. This gave rise to a host of Luciferic beings.

For Man is especially important what happened in the Lemurian epoch, when the development of the human I started by sacrifice of the SoF. At that time such Luciferic beings, retarded SoF that did not fully reach their evolutionary goal on Old Moon, sneaked into Man's astral body and thereby gave Man free will but also the possibility for evil. This links to the 'Fall of Man' in the Old Testament, the seduction by the snake that 'opened Man's eyes'.

This Luciferic infection therefore had the negative effect of a corruption of the astral body (and the bodies below), whilst the positive effect is that it gave Man freedom. We can call it an 'infection' because the astral body was infected as it had not reached a state of maturity, hence causing desires and urges.

The Luciferic infection has consequences for Man:

A good God could never create Free Man .. for this another being – left behind – was required to provide counterimpulses.

For an understanding -> all is spiritual influences of hierarchies, éverything is made up out of this.
Then, some evolve slower, other faster .. not all reach their goal.


The schema FMC00.018 below depicts the key relationship between Jehovah (one of the seven Spirits of Form) and the 'backwards' or 'underdeveloped' Luciferic spirits. 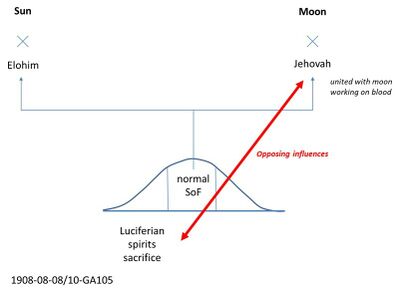 .. in the times that went before the Mystery of Golgotha — the human being received quite special forces when he reached the age of 14 or 15, over and above the forces he possessed in earlier childhood. At the 14th or 15th year of life, in those olden times, man received forces which have been lost to mankind since the Mystery of Golgotha. These forces are no longer there; or they are only there in a backward, atavistic manner; — no longer as normal forces of human nature generally.

The forces which the human being thus received when he became about 14 or 15 years old were simply there in his environment inasmuch as he himself was there. Moreover, they were such as could unite with the processes of physical manipulations.

The forces man then received about the 14th or 15th year of life have gradually been lost. It was with the 15th century that they disappeared almost entirely. That is why many things that were written before the 15th century A.D. are no longer intelligible at all to-day, save with the help of Spiritual Science., For in these olden times, the moment a man set to work with any physical manipulations (such as are done nowadays quite commonly in our laboratories), — the moment he did so, he gave occasion for certain Luciferic elemental beings to arise at the same time. At any rate, he could give occasion for this. These Luciferic elemental beings were thoroughly effective; and, if engendered, would have played their part in the social life of men, if these things had not been kept secret.

Mankind to-day is not exposed to those Luciferic elemental spirits of whom we may speak in this connection. But in compensation for this, human beings are exposed all the more strongly to certain Ahrimanic elementals. Ahrimanic elemental spirits come into being to-day with a like necessity, as the aforesaid Luciferic beings did in antiquity. Only they come into being in a very different way — out of quite other forces and impulses in human nature.

On Old Moon certain archangels had not completed their evolution. They brought 'enthusiasm' into blood and astral body and set up the connection beteen the brain and the physical senses, hence live in the nerve branches ending in the sense organs.

Man was not independant, could only do what the spiritual forces would tell him, in whose environment he was embedded, so to speak. Man received everything from these spiritual beings as behaved as if guided by instinct. This is how the forces of these spiritual beings worked and showed themselves, beings who did not themselves incarnate on earth. It were those beings who were not positively oriented toward humanity that worked on Man thus that the longing for this missing independance came about. The divine plan did include this independence for Mankind, but these beings made it come about much earlier. Together with other forces, they slipped in to the astral body, that was at that stage not yet fully connected with Man's being, and this have Man a sort of will-power, that was only astral though and not led by intelligence, thereby enabling error and evil. These powers are called the Luciferic powers, and they had a good and an evil side. They seduced and side-tracked humanity into error, but also gave humanity freedom.

The Lemurian Man had only a soul perception. He would see form nor colour of a flower, and no outerly appearances. The flower only showed as a lightning astral image, that was observed with an inner organ. The divine plan included Man to start perceiving with outer senses around the middle of the Atlantean epoch, but through the Luciferic influence this happened sooner, whilst Man's instincts were still pure. That is the 'fall of mankind'. Religious sources say it was the snake that openened the eyes of Man. Without this Luciferic influence, Man's body would not have become so solid as it is today, and Atlantean Man has seen the spiritual side of reality. Instead man fell into sin: illusion and error.

To make things worse: around the middle of the Atlantean epoch the influence of Ahrimanic forces was added to this. The Luciferic powers had worked on the astral body, now the Ahrimanic powers slipped in and worked on the etheric body, especially the ether head. This way Man fell into the illusion that the outer physical world is the real world.