It describes how Man was created as a soul being through the Spirits of Form (Jehovah-Elohim impulse) in the Lemurian epoch, and became physical mineral Man as a result of the Luciferic infection

Schema FMC00.299 provides an overview reference to the first creation in the Book of Genesis, as explained in the 1910-08-GA122 lectures. 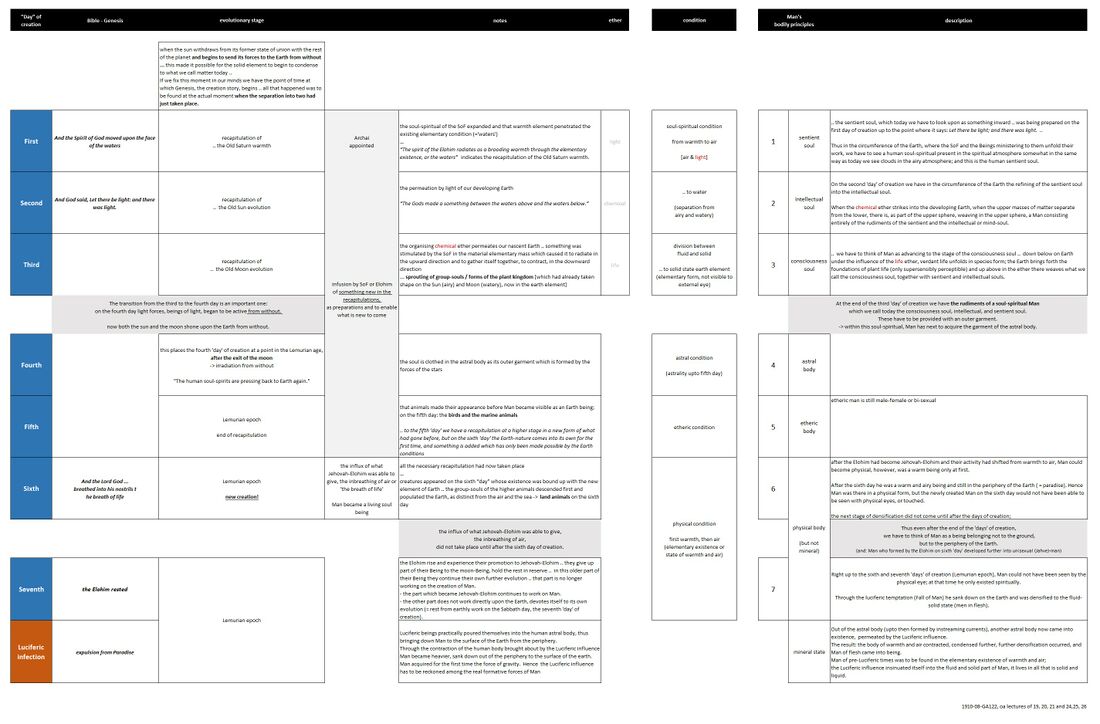 FMC00.057C provides an overview scheme for the study of the evolution of our current Earth planetary stage and CoC, the formation of the current physical solar system with the planets, the emergence of the spectrum of elements and ethers, and nature's kingdoms on Earth.

The above already provides no less than 18 lectures as a base package to study.

God drove Adam out and placed a Cherub with a flaming sword before the garden of Eden to protect the path to the tree of life (Genesis 3:24) The cherub is the planetary spirit who represents manas, immortal life; it does not signify knowledge through kama-manas. The cherub who stands by the side of Jehovah was placed before the garden of Eden so that the human being does not push into this garden, where the truth in its primal, eternal form is to be found

Note: the start of the lecture, compares the Greek mythology images of three streams from the three Logoi: Uranus, Chronos, and Zeus.

(DE only) - the first chapter of Genesis

[Confusion with yom and day]

To find the answer to this question we must first learn to understand Genesis in the right way. There is a passage in the Genesis account which has been a veritable stumbling-block to all the commentators, because for centuries they have completely ignored what occult investigation has had to say about the real meaning of the words with which our Bible opens. If you are at all familiar with modern Biblical criticism, you will know what difficulty this point has caused the commentators.

There is a sentence in Genesis which is rendered And God divided the light from the darkness, and it is then made to appear that light and darkness alternated. I shall come back again to a closer examination of the words. For the time being I will make use of a translation into modern speech — it is not correct, and I am only using it provisionally.

At a certain point it says: And the evening and the morning were the first day.

And further: And God called the light Day.

This is a real stumbling-block for the world of letters! What then is a “day” of creation? The naive intellect regards a day as lasting twenty-four hours, as something which alternates between light and darkness, as does our day, during which we wake and sleep. Now of course you all know how much scorn has been heaped upon this naive idea of the creation of the world in seven such days. You perhaps also know how much labour — how much fruitless labour-has been applied to the task of identifying the seven days of creation with longer or shorter periods — geological epochs and so on — so as to make a “day” of creation signify some longer period of time.

The first difficulty arises of course when one comes to the fourth “day,” when Genesis first speaks of the setting up of sun and moon as directing time. Now every child today knows that the regulation of our twenty-four-hour day depends upon the relationship of the earth to the sun. But since the sun was not there until the fourth “day,” we cannot speak of a twenty-four-hour day earlier than that. Thus anyone who tries to adhere to the naive belief that the day of the creation story is a day of twenty-four hours has to do violence to the Genesis account itself. There may of course be such people; but it must be objected to them that in insisting that Genesis refers to days such as ours they are certainly not supported by revelation. As to the vagaries of those who try to find a way out by giving a geological meaning to these “days” of creation, they are really not worth bothering about. For in the whole range of the literature of the subject there is not the slightest evidence that the word yom signifies anything resembling a geological epoch.

What then is the meaning of the word yom, which is usually translated as “day”?

Only those can form a judgment about this who are able to transport themselves in feeling, in attitude of soul, into ancient methods of naming things. The process of nomenclature in ancient times needed quite a different kind of feeling from what we have today. To avoid too great a shock, let us take it step by step.

Let me first draw your attention to a doctrine held by the Gnostics. They spoke of spiritual powers who played a part in our existence, who entered successively into the development of our existence, and these powers, these Beings, they called Aeons. By these Aeons they do not mean periods of time, but Beings. They mean that a first Aeon acts, and, having executed the work of which he is capable, is succeeded by a second Aeon, and after the second has exhausted his capacities, a third takes over, and so on. When the Gnostics spoke of Aeons, they meant Beings guiding development in succession, one taking over from another. It was only very much later that the purely abstract concept of time was associated with the word “Aeon.” Aeon is a Being, a living entity.

We find the same thing elsewhere concealed in a verbal resemblance. In the Aryan languages there is a connection between deus and dies — god and day. There is an essential inner relationship between this pair of words; in earlier times the connection between “day” and a Being was clearly felt, and when one spoke of weekdays, as we speak of Sunday, Monday, Tuesday and so on, one did not mean simply periods of time, but the groups of Beings working in Sun, Moon, Mars and so on.

Let us then understand the word yom, which is usually rendered “day,” to mean a spiritual Being; then you have the hierarchical Beings one stage lower than the Elohim, Beings whom the Elohim used as subordinate spirits. After the Elohim through their higher organising powers had brought light into existence, they then appointed to his post Yom, the first of the the Archai. Thus the spiritual Beings whom we call Spirits of Personality, or Principalities, are the same as those called in Genesis, Time-Intervals, Days, Yamin. They are the servants of the Elohim. They carry out what the Elohim direct from their higher standpoint.

Those of you who heard the lectures which I gave recently in Christiania [cycle Mission Folk Souls] will remember that there too I called the Archai Time-Spirits, and described how they still work as Time-Spirits today. They were the servants of the Elohim. They were appointed by the Elohim to carry out the plans for which they themselves had laid down the main lines. In this way everything fits together into one great system, even for our understanding. But of course it is only when you have followed up what I am saying for years that you will acquire a real grasp of how everything without exception falls into place.

The exalted Beings of the Elohim entered into this interweaving of the several ethers, and of air, water and earth, and appointed Beings below them in rank as their servants. They gave these Beings their orders, so to say. In the moment when the Elohim had poured light into existence, they passed over to these Beings the task of carrying out in detail what had been set going. Thus we may say that after the Elohim had created the light, they appointed the first Time-Spirit to represent them. It is this Spirit who is hidden behind the customary phrase “the first day.”

We shall only understand the still deeper meaning of this first day when we also understand what lies behind the verse: And the evening and the morning were the first day.

The first of the Time-Spirits entered into activity, and with this activity was associated what can be described as an alternation of ereb and boker. Ereb is not the same thing as evening, and boker is not the same thing as morning. An appropriate translation would be: “There was ereb, confusion; and there followed boker, organisation.” There was a state of disorder, and it was followed by a state of order, of harmony, brought about by the work of the first of the Time-Spirits.