Old Sun is the name of the second planetary stage in the evolution of our current solar system, after Old Saturn and before Old Moon and the current Earth stage. 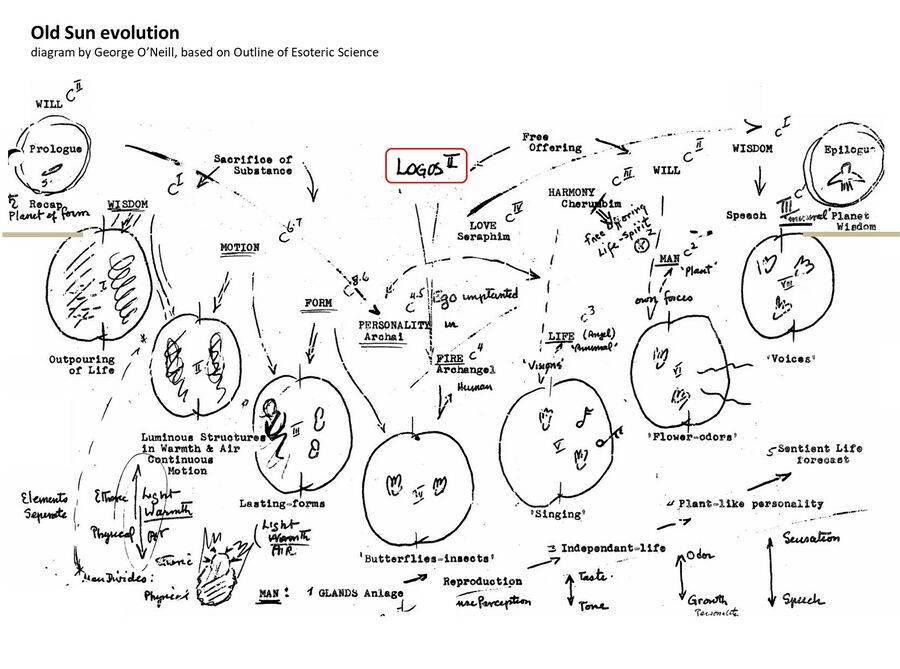 FMC00.223 is a reference table showing the cascading pattern of consecutive hierarchies at work in the seven CoL (or rounds) of the Old Sun stage. For AM and PM, see The two halves of each evolutionary cycle.

FMC00.222 is an illustration by George O’Neill, based on Outline of Esoteric Science 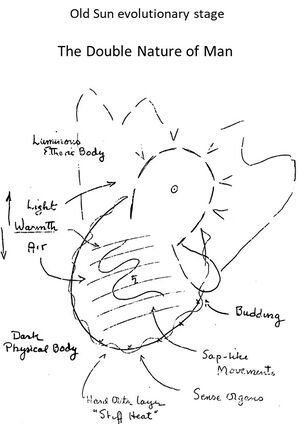 1909-04-13-GA110 describes the process between Archangels and Cherubim on Old Sun (SWCC), the Cherubim coming from four sides and reaching out to allow the archangels, going through the 'human stage', to stay longer in space outside of Old Sun

.. to describe these archangels, in a trivial, way: It pleased them too much, when they soared out into the Universe; the flowing outwards, the soaring up to the spirits of the universe, pleased them more than the contracting, or drawing of themselves together again. The latter seemed a narrowing, inferior existence.

Life in the light-ether pleased them better. But they never could have extended this life in the light-ether further than a certain limit, if something had not come to their help. If those beings on Old Sun had been left to themselves, it would have been quite impossible for them to do anything else than bravely to return to the Sun, in the Sun-night. Yet they did not do it, they lengthened the time of their stay outside in the universe always more and more, they remained longer and longer in the Spiritual World.

Who helped them to do this?

Let us imagine that the small circle is the ball of Old Sun; the archangels strive to get out into the spaces of the world from all sides of that Old Sun ball, they spread out their presence, spiritually into the universe. The archangels were helped in this out-spreading by the fact that there were beings out in the universe who came to meet them. Just as earlier, the fire elements of the Thrones, streamed towards Old Saturn, so now other beings come to meet the out-streaming archangels, beings who are higher than the Thrones, and these help them to stay longer out in the Universe than they otherwise could have done.

Those beings who came out of spiritual space to meet the archangels, we call Cherubim. They are Beings of an exceptionally sublime nature; they have power to receive the archangels, so to speak, with open arms. When the archangels spread outwards, the Cherubim came to meet them, out of the Universal All. Thus, all round the globe of Old Sun, we have the approaching Cherubim. If I may use the comparison: just as our earth is surrounded by its atmosphere, so was Old Sun surrounded by the realm of the Cherubim, for the benefit of the Archangels. When the Archangels went out into the Universal spaces, they beheld their great helpers.

In what way did those great helpers meet them, and what appearance had they?

This can naturally only be stated by clairvoyant consciousness as read in the Akasha Chronicles. These great Universal Helpers revealed themselves in quite definite etheric shapes or figures. Our forefathers who, through their traditions, were still conscious of these most important facts, represented the Cherubim as those strangely winged animals with differently formed heads: the winged Lion, winged Eagle, winged Bull, winged Man.

The fact is, that the Cherubim made their approach from four sides, in forms afterwards represented in the way the Cherubim are known to us. In the schools of the first Postatlantean initiates, these Cherubim, approaching Old Sun on four sides, were given names, which later became the names, Bull, Lion, Eagle, Man.

The aspect presented by Old Sun, was that of its human inhabitants, called archangels, passing out into universal space, and the four kinds of Cherubim, coming from four sides to meet them. On account of this, the Archangels were enabled to stay in the spiritual region which surrounded Old Sun longer than they otherwise could have done. For the influence of those Cherubim upon the Archangels was vivifying in the highest degree, in the spiritual sense.

But as the Cherubim came into the vicinity of Old Sun, their influence was active also in another way. They acted in the way described, on those Sun-beings who had evolved up to the element of light, who knew how to live in that element.

This breathing process of the archangels that makes Old Sun alternate into a dark night and bright day, is described in the 1909-04-13-GA110 quote on the topic page Variable stars. Its importance is stressed by the following complementary extract:

Whilst the Old Saturn is evolving into Old Sun (as we have described in the last lecture) those Beings who have just been named are also evolving each one stage higher, and the Archangels enter upon the human stage. Externally - we might say physically - the warmth condenses into gas: Old Sun is a gaseous body.

While Old Saturn was a dark warmth-body, Old Sun now begins to shine outwardly; but it alternates, so to speak, from Sun-days to Sun nights. It is particularly important to take notice of those interchanges from Sun-days to Sun-nights. For an enormous difference between the life of the days and the nights obtains on Old Sun.

If nothing else had intervened but what has been described in the previous lecture, the Archangels, who are the 'men' [editor: going through the human stage CoC] on Old Sun, would during the Sun-days hurry with the rays of light out into the Universe, would expand to the Universe and would have to return to the Sun during the Sun's nights. It would be an inhaling and exhaling of the light, together with all the creatures weaving their existence within it. But it is not so. ..

So, too, in first speaking of ‘space,’ that also is merely a pictorial description; for, as we saw in the last lecture, ‘time’ itself did not even exist. When we speak of ‘space’ we are speaking pictorially. Of space there was none in our sense. And time first came into being on Old Saturn itself. When we carry our thought back to Old Saturn we are absolutely in the realm of spaceless eternity. When, therefore, something is said to call up a picture before our minds, we must be clear that it is only a picture. If we could have observed the space of Old Saturn we should have found no substance dense enough to be called gas, nothing but heat and cold. In reality we could not speak of coming from one part of space into another, but only the sensation of passing through warmer and colder conditions; so that even the clairvoyant, when he transports himself back to the time of Old Saturn, receives the impression of being in spaceless ebb and flow of heat. That is only the outer veil of the Old Saturn condition.

In this way we obtain a picture of Old Sun: We think of a centre in which is focused what came over from Old Saturn; the sacrificial acts of the Thrones to the Cherubim. Absorbed in contemplation of these acts of sacrifice are the Spirits of Wisdom. This vision causes them to radiate forth from themselves that which is their real being: streaming, flowing wisdom is the virtue they give. However, as this is radiated through by ‘time’ it is sent forth and sent back again, so that we have a globe, inwardly illuminated by the virtue returning to it; for we must not think of Old Sun as outwardly but as inwardly luminous, because the Spirits of Wisdom radiate outwards. Thus something new is created which we may describe as follows: Let us imagine the Spirits of Wisdom as sitting at the centre of the Sun absorbed in contemplation of the vision of the sacrificing Thrones; and by reason of this vision, radiating forth their own being; and receiving back their radiating being which they sent forth, receiving it reflected back from the surface, so that they receive it back as light. Everything is illuminated. What then do they receive back! Their own being surrendered by them became a gift to the Macrocosm, it was their inner being. Now it rays back to them; their own being meets them coming back from outside. They see their own inner being outspread in the Cosmos — and reflected back as light, as the reflection of their own being.

The inner and the outer are the two opposites which we now meet. The earlier and the later are transformed into the inner and the outer; and space is born! Space comes into existence through the bestowing virtue of the Spirits of Wisdom on Old Sun. Before that, space could only have pictorial value. Now we have space - but consisting at first of only two dimensions. There was as yet no above and below, no right or left, nothing but an outer and an inner.

In reality these opposites appear at the end of Old Saturn; but they repeat themselves as space-creation on Old Sun. And if we wish to obtain a conception of all these occurrences, as we did of the last when the picture appeared before our soul of the sacrificing Thrones, giving birth to the Spirits of Time, we must not even picture a body consisting of light, for the light within it was only a reflection. We must think of it as a globe of inner space, in the centre of which the picture of Old Saturn is recapitulated: the Thrones as Spirits as though kneeling before the Cherubim, those winged beings, sacrificing their own being, and, in addition to these, the Spirits of Wisdom, absorbed in the vision of the sacrifice. And now it is also possible to have the vision of the heat of the sacrifice being so transmitted that we may think of it objectively as the incense of sacrifice, as air ascending from the sacrifice as incense. We obtain a complete picture if we imagine: the sacrificing Thrones kneeling before the Cherubim, and as though participating, the Spirits of Wisdom, absorbed in the contemplation of what they perceive in the centre of the Sun as the sacrifice of the Thrones, and thereby ascending in their conception to the idea of the sacrificial incense pouring forth and spreading out on all sides, and finally condensing, while from its clouds proceed the figures of the Archangels,--who reflect back the incense from the periphery as light, illuminating the interior of Old Sun, returning the gift of the Spirits of Wisdom, and in this way creating the sphere of Old Sun. This sphere consists of the outpoured gift of glowing heat and sacrificial incense. At the outer periphery are the Archangels, the creators of the light, who, later depict what was first on Old Sun; it then returns as light. What then, do these Archangels preserve! They guard the beginnings, what was formerly there, the earlier. The gifts they receive they reflect. That which was there in the beginning they radiate forth at a later time, and in as much as they do this, they are the Angels of the Beginning, because they bring into activity in later times what was previously there. ‘Archangeloi’ ‘Messengers of the Beginning’!