Evolution is a matter of receiving and giving, as illustrated via the evolutionary pathway covered in Twelve Conditions of Consciousness.

In the spiritual cosmos, the highest divine nature is love, pure love is selfless, and the highest form of love is sacrife.

The highest stage of development in the evolution of all spiritual beings in the cosmos, is to grow to this selfless giving and come to the stage of giving one's own substance away. Ceasing to exist, in order to give life to other life. Continuing to live in what lives on, in another form.

For us humans, this is still far from our current stage of evolution. It requires imaginative soul work to get closer to this image and reality. We can do this, as an exercise, by contemplating the border between our current physical world and the spiritual world. In nature, we see life being torn away and disappearing at a large scale, and we feel like the physical life stops. But at the other side, it continues and becomes stardust from which new life is built and will be born.

Schema FMC00.094 illustrates Rudolf Steiner's coverage on the topic of the Meaning of life in two lectures in 1912. The schema below puts the question in a broader perspective and can be approached from various angles. One of which is the 'receiving from above' and the 'giving back upward arrow'. That is: how death, or not-developing one's self, or sacrifice, is 'giving life' on another level, in another way. 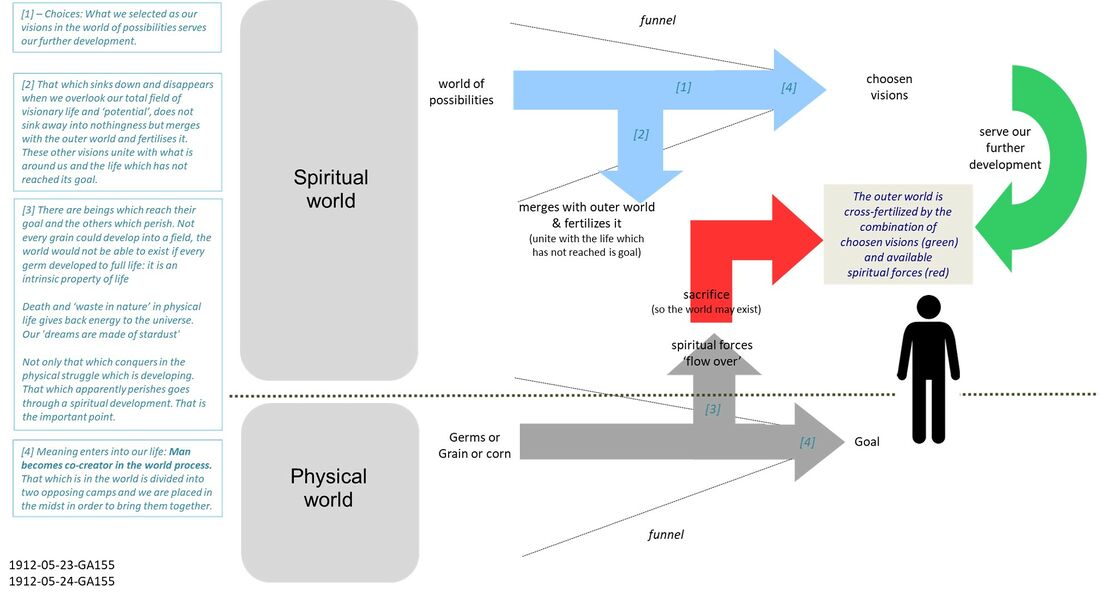 The starting place to learn about sacrifice is the GA132 cycle, where Rudolf Steiner sketches an imaginative picture of the sacrifice of the Thrones in the first lecture on Old Saturn, 1911-10-31-GA132.

The relation between will-atman as the highest principle of Man as a sevenfold being is explained in the lecture 1907-01-28-GA096 on the Lord's Prayer, see also the concept of the three Logoi

Man is today essentially a consciousness, or understanding being, whereas in many ways his will is limited. He understands the surrounding world as a totality — that is, to a certain degree — but has no real control over all that he penetrates with his knowledge.

This control by his will is a development of the future, and it will become ever stronger until he attains that central goal of existence known to spiritual science as “the great sacrifice,” signifying the power of will to sacrifice oneself completely, not merely in driblets of human sacrifice of the kind of which man is capable today with his puny present feelings and will power. In future time he will have developed the strength to sacrifice his whole being by letting it flow directly into material substance.

One may picture this “great sacrifice,” the highest expression of will in divine nature, by imagining oneself before a mirror in which one's image is reflected. This image is, of course, an illusion, a semblance. Now carry over this image to the point of imagining yourself dying, sacrificing your existence, your feeling and thought, your very being, to inject life into that image. Spiritual science in all ages has called this phenomenon the “outpouring,” “the emanation.” If you could really make this sacrifice, it would be clear that you would no longer be here because you would have given up your whole being to this reflected image to imbue it with life and consciousness.

When the will has become capable of making the “great sacrifice,” it actually creates a universe, great or small, whose mission is bestowed upon it by its creator. Such is the creative will in the Divine Being.

1908-10-26-GA107 discusses sacrifice as the law of the spirit world, and renunciation as a law of the astral world (and an intermediate stage or 'way to get there') (SWCC)

.. it must be possible for someone who through exercises enters the spirit world, not only to experience all nuances of bliss in the sphere-music, but must also develop in oneself the feeling of the opposite of bliss. Just as renunciation is the counterpart of deprivation, so is the feeling of sacrifice related to bliss: sacrifice that is ready to pour out what is received as bliss — to let it flow out into the world.

Only a being living entirely in materiality, thinks that it loses itself through sacrifice; no, a higher, richer development is linked with sacrifice in the service of universal evolution.

So we see that the human being ascends to Imagination and Inspiration and enters that sphere where the whole being is permeated with ever-new nuances of bliss, where the soul experiences everything around it, in such a way that everything not only speaks to the soul, but that all around the soul becomes an absorption of the spiritual tones of bliss.

The ascent to the higher powers of knowledge is attained through the transformation of one's whole life of feeling. And esoteric training has this sole purpose: that through the rules and methods that have been given us by the Masters of Wisdom and of the Harmony of Feelings, and which have been proved and tested for thousands of years, the human being's feeling and will are so transformed that he or she may be led up to higher knowledge and experience. When pupils gradually develop and transform the content of their feeling and will through initiation exercises, they attain to these higher faculties.

In what does the continual increase in the power of spiritual Beings consist, how is it expressed?

It consists in this, that

The whole meaning and spirit of evolution rests on the fact, that we pass from taking, to giving. You have an analogy for this in human evolution in our life here between birth and death: the child is helpless, it must receive the help of those about it. It grows more and more out of this helplessness, and at last itself become a helper in its turn. So too in the great universal evolution of the human race.

Vulcan is more than Sun, and with this it has reached the maturity of sacrifice, the maturity necessary for self disintegration.

Now we have seen that guiding Beings are everywhere. We have seen with the earth, how the higher spiritual Beings — Angels, Archangels, Archai — descended, and at a time when humanity could not as yet help itself, they guided it until it reached a certain height. These are the spiritual beings of the Hierarchies who had reached their maturity in earlier times; but when this height is reached, when those Beings who had descended from the heights reach their goal, then other Beings have to become the leaders and guides of the said nations. When nations have to rise in a certain way still higher than their highest point, leading personalities have to give themselves up of their own free will to become the bearers of higher spiritual Beings; only then does it become possible to lead the nation a few stages beyond that which was originally planned for it. But in such cases one thing must happen; those who descend into the beings who have to lead the nation to a still higher point of civilisation, must take upon themselves all the Karma which the nation has been accumulating. This is the important law as regards taking upon oneself the Karma of nations and of races. From a definite point of time the guiding personalities have themselves to bear all the Karma of those nations and races. That was the essential reason that such individualities as Hermes, for instance, had to take upon them — their nations Karma, which had accumulated up to then. On each planet, such things are the reflected images of great Cosmic processes.

But we have reflected images which go further still. We have seen that the Thrones became Thrones, only because from created beings they themselves became Creators, that they were enabled to pass from a condition of taking to one of giving. The Thrones had once upon a time passed through their development in other world systems, and had progressed so far that they were able to let their own Substance stream out from them.

It is a higher grade of development to be able to give, to bring sacrifices, than merely to store up for oneself all that the Cosmos gives. This is again mirrored in human life. What is this human development? Look backwards in spirit to the Atlantean and Lemurian times, and then look forwards! Man receives the physical body, the etheric and astral bodies and the Ego, and then again the Ego works back on the other members, transforming the astral body, the etheric and physical bodies, into Manas, Budhi, and Atma, into Spirit self, spirit-Life and Spirit-man. Primeval wisdom has always taught that man transforms his astral body in such a way that this astral body consists at first partly of Manas and partly of the old astrality, but that later it becomes completely transformed, completely penetrated by the work and action of the Ego. Let us take a man who has not yet reached that grade of development when the astral body is completely penetrated by the work of the Ego; almost all men, with very few exceptions, are in that condition. That which man has already transformed goes with him through all eternity; that which he has not yet changed in which his Ego has had no part, must leave him, as a sort of astral shell, after he has passed through Kama-Loka; that shell dissolves in the astral world, not without its having brought about considerable mischief if as an astral body, it had bad desires and evil passions. Thus we can say that the development of man consists in. his leaving always less and less behind him in the astral world. Let us follow the process; the man dies. Soon after death the etheric body is dissolved; and the extract of it remains. The man passes through. Kama-Loka, and the untransformed shell detaches itself; that which has been re-worked goes with man through all eternity, it is brought back into each new incarnation. The more perfect the man is, the less there will be of those remnants left in the astral world; till at last he will have progressed so far that he leaves nothing of his astral body in Kama-Loka, so far — that he can injure no living being on earth through the remnants he leaves in Kama-Loka. Such. a man has then the possibility of seeing into spiritual worlds. For it is not possible to reach this condition without having reached a certain degree of clairvoyance in the Astral. The whole astral body has then been spiritualised, it has become Spirit-Self, and the whole of it is taken with him by the man to the spiritual world. Formerly that which was bad was left behind, now the whole astral body can be taken with him into all futurity. And in the moment when the astral body is so far advanced that it is completely transformed, in that moment the whole of this new astral shape is impressed upon the etheric body, so that the etheric body becomes a counterpart of the astral body. The etheric body does not need to be as yet quite transformed, but that is impressed upon it which has been refashioned in the astral body. You see, that we have here described a particularly exalted being, one who is eminently far advanced, because he has developed the whole of the Spirit-self. This Being is called Nirmana-Kaya in Eastern Science; for his astral body, his astral Kaya, has reached the stage when it leaves no remnants in the astral world.