The question after the meaning of life is one of deepest questions that can live in us human beings.

We also have to ask what is meaning, again it is related to the frame in which we ask the question for meaning, how we define what is supposedly meaningful? for our mundane tasks in our personal life today, for humanity and the planet, for the whole of the cosmos where we fit in?

No answer of this question is satisfactory on its own, the answer is as good as the depth of contemplation about these things by the person who asks the question. So no answer can be given in a short sentence, not a few pages, not a book, because the real answer is a process and an attitude in life.

Man fits into a cosmos that consists of ever-evolving spiritual beings (re Spiritual hierarchies) in a great creative evolutionary dynamic (re Evolution). And as a person, as a people, a generation .. we are like drops or waves .. fitting into that larger whole that has meaning much greater than what we can imagine, because everything we can know us was created around us by higher beings with a 'plan'.

The meaning of human life is the establishment of the Kingdom of God on Earth, and that means the replacement of the egoistical, hating, dictatorial and irrational things with a life of brotherhood, freedom and reason

as quoted by Daskalos in 'The Esoteric practice'.

Schema FMC00.037 illustrates Man's most important questions in the conscious quest for the meaning of life. 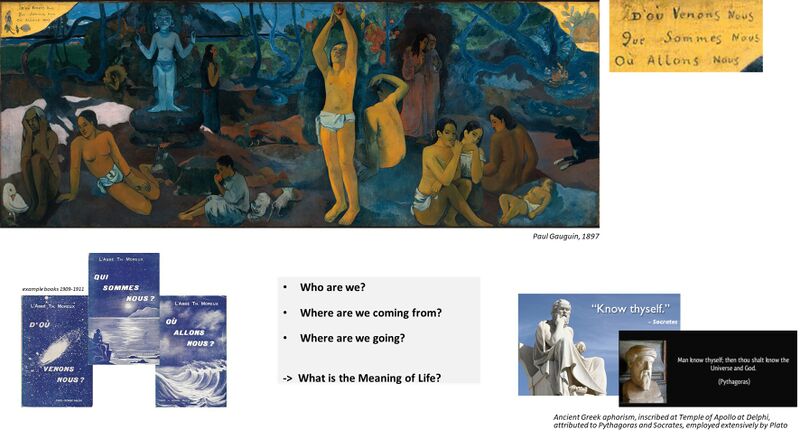 Schema FMC00.094 illustrates Rudolf Steiner's coverage on the topic of the meaning of life in two lectures in 1912. The schema below puts the question in a broader perspective and can be approached from various angles. One of which is the 'receiving from above' and the 'giving back upward arrow'. That is: how death, or not-developing one's self, or sacrifice, is 'giving life' on another level, in another way. See also Overview Golden Chain. 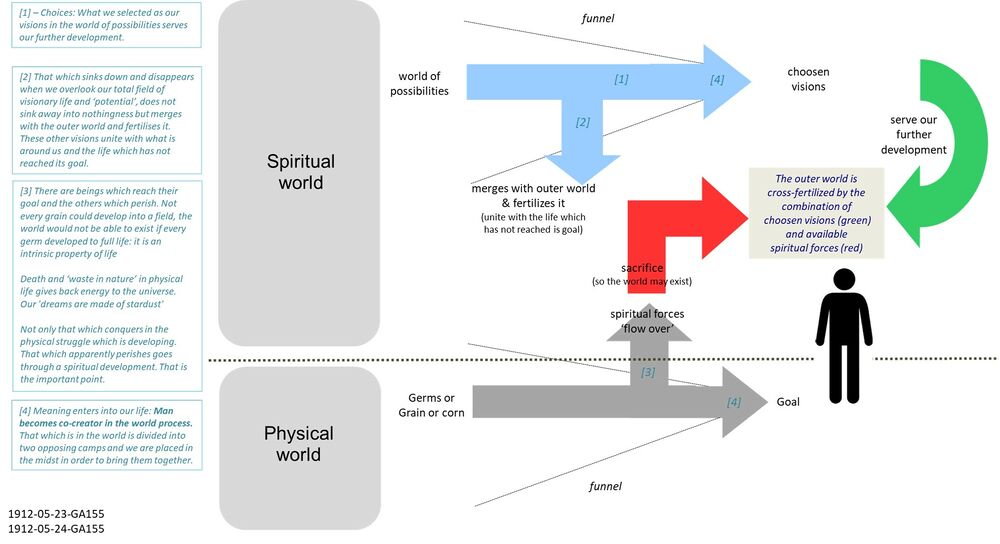 The whole purpose of the universe is unerringly aimed at one thing - you.

relates the purpose of Man's development during the Earth stage of evolution to the beginning of John's Gospel, and the spiritualization with the Christ Impulse.

.. the meaning of life upon Earth is this:

That men should overcome this darkness of the soul, in order that they may recognize the Light of the Logos.

“What is the meaning of existence as a whole?” and particularly “Why has man his peculiar position within this existence?”

It might be said that the meaning of life consists in the fact that spiritual beings to whom we look up as Divine Beings gradually bring man to the stage where he is permitted to co-operate in the evolution of existence, so that man who was imperfect in the beginning of his development and was incapable of taking part in the whole construction of the universe, might in the course of evolution gradually be trained to participate more and more in this evolution.

That would be an abstract answer, telling us very little. Rather must we penetrate into certain secrets of existence and life, if we would grasp something like an answer to a question of such far-reaching importance.

quote in the context of teleology and cosmogony (see below)

The human mind is not capable of grasping the Universe. We are like a little child entering a huge library. The walls are covered to the ceilings with books in many different tongues. The child knows that someone must have written these books. It does not know who or how. It does not understand the languages in which they are written. But the child notes a definite plan in the arrangement of the books - a mysterious order which it does not comprehend, but only dimly suspects.

A teleology is an account of a given thing's purpose. For example, a teleological explanation of why forks have prongs is that this design helps humans eat certain foods; stabbing food to help humans eat is what forks are for. A purpose that is imposed by a human use, such as that of a fork, is called extrinsic. Natural teleology contends that natural entities have intrinsic purposes, irrespective of human use or opinion.

In the late 18th century, the concept of 'telos' and teleology are fundamentaly underlying the philosophy of Georg Wilhelm Friedrich Hegel and Immanuel Kant.

A cosmogony is a model concerning the coming-into-existence (i.e. origin) of either the cosmos (i.e. universe) and/or the so-called reality of sentient beings. Developing a complete theoretical model has implications in both the philosophy of science and epistemology.

In astronomy, cosmogony refers to the study of the origin of particular astrophysical objects or systems, and is most commonly used in reference to the origin of the universe, the solar system, or the earth-moon system. Cosmogony can be distinguished from cosmology, which studies the universe at large and throughout its existence, and which technically does not inquire directly into the source of its origins.

Note: the cosmological argument from theology regarding the existence of God is technically an appeal to cosmogonical rather than cosmological ideas. In practice, there is a scientific distinction between cosmological and cosmogonical ideas. Physical cosmology is the science that attempts to explain all our observations of the universe . Questions regarding why the universe behaves in such a way have been described by physicists and cosmologists as being extra-scientific (i.e., metaphysical), though speculations are made from a variety of perspectives that include extrapolation of scientific theories to untested regimes as well as philosophical or religious ideas.

The focus of most discussions centers around the 'what'. What we can observe and measure, repeatedly, is within the bandwidth filter of our senses and intellectual thinking, in short our current state of (sensory) consciousness. The 'why' and 'how' are not answered, no matter how long or deep the discussions about the 'what'. We know lot’s of small little ‘what’s, but these are by applying the scientific-material paradigm in a reductionist experiential framework.

Furthermore it is difficult to scale the human experience in our limited life duration to the whole of history and evolution of time scales we can not contemplate experientially, hence our logical thinking is trapped into 'foolish extrapolation'. Last there is the challenge of the Johari window: you don't know what you don't know.

So the question about the 'meaning of life' bounces off on the limitations of our human faculties and the framework within which the questions are asked, which is necessarily human and limited, and unable to answer the question .. given the fact some higher form of intelligence than human must have created in some way all that is there (irrespective if you fill that in from a perspective of mineral science or religion).

Hence, the question of Meaning of Life, central to philosophy across the ages, cannot really be answered in a living, thinking and operating framework, a worldview that is coupled loose from nature, the cosmos, mankind as a whole .. and that does not have a teleological cosmogony: a framework or model for the coming into-existance of the cosmos and mankind, and it’s purpose at all levels.

The universal depth and richness of this question is that it really asks the question not of what you deem important for your own selfish agenda in this incarnation, but how things stand for the whole of life and the evolution of nature and mankind.

We can distinguish two types of Worldview from which to consider the question:

Observe: the contemporary buzzword ‘the matrix’ seems a modern term for 'Maya' as an illusionary world of sensory perception in a material world.

This topic page is more about the question itself, than about the answer. That answer is given by the whole body of knowledge of spiritual science and philosophy and your own study and contemplation of it.

The view that this site documents is the following. It is not easy to write short condensed statements, but still a worthwhile exercice. You are invited to try, your attempts are welcome and can be added here.

Man is the tenth hierarchy of spiritual beings in a spiritual cosmos where creation, stemming from The three Logoi principles, already put the Evolution of nine classes of Spiritual hierarchies or beings in motion. That whole dynamic is ever evolving as all spiritual entities are ever-evolving and intertwined rather than separate. So Man also is part of that whole and cannot be seen as separate. And the plan and 'meaning of life' for mankind find its origin with these higher spiritual beings who have created the cosmos we know in order to support Man in that development. Man is placed in creation as a free being to co-create the future, we can coin that as Free Man Creator.

The evolutionary goal of Man is to become a spiritual being that can create based on freedom of choice, and out of pure love. In other words mankind will evolve to become gods, to Sacrifice the own being for the creation of new worlds. That is a long way off though ;). Currently mankind is at the stage of just having received self-consciousness and freedom on Earth, and now in a battle between good and Evil in order to ascent and spiritualize its lower beings into spiritual principles, in short become a spiritual being. Man's transformation and spiritualization, to become a spiritual being functioning on the basis of love, will only be realized in the next three planetary stages of our solar system. Just as where we have arrived today is the result of three previous planetary stages.

The schema illustrates the 1912-05-GA155 lectures, that also describe the apparent 'waste in nature' in the physical world. The schema shows the physical ànd spiritual worlds, because as describes the one flows into the other, they are both connected and actually just one and the same.

We find this back in suffering, sacrifice, death.

And this again we find back for humanity in great disasters of nature, or man made catastrophies such as wars.

The following quote is another illustration of this. Note the caterpillar to butterfly is the image metaphor used for reincarnation, but also for spiritualization: going from an ancient to a new form of life.

The excerpt below is from the lecture "New Foundation", Sofia, January 1, 1943 and talks about why war has to exist.

War is a contradiction, the reasons for which lie in the distant past.

Because God transforms evil into good, the war will bring some good to humanity. For humans war brings misery and death, but for the Great Beings it is a [kind] of show. Just as actors die on the stage and are "resurrected" behind the scenes, the same way the participants in the war will be resurrected. God will give them new bodies, healthier ones and more beautiful, with new and healthier legs, arms, eyes, and heads.

The war will force them to open their coffers, to open their minds and hearts, to take out everything they have hidden in them. It will make them give up their selfishness. Selfishness is coming to an end.

The end of the caterpillars' life is coming. Until now, humans have been caterpillars, gnawing leaves and thinking only for themselves. This life is over. In four or five years they should hatch, they should become butterflies.

How do you want to indulge in life? As caterpillars, or as butterflies?