The spiritual 'counterforces' is another, maybe more 'technical' term for 'evil', referring to the fact that these forces counter or oppose the natural good development. They provide strong resistance with which development is confronted, and needs to struggle and cope with - in order to progress correctly, thereby strengthening the development. A simple analogy is that of the resistance of the road that enables the car to move forward due to the traction it provides and needs to be overcome.

In initiation one can qualify these as 'elemental unbalances', as certain elements and etheric formative forces become overly dominant versus the normally expected healthy balance.

Throughout the ages the fight between opposing spiritual entities has been referred to as War in heaven, the fallen angels, the image of Michael and the dragon, etc. Also Christ-Jesus confronts Lucifer and Ahriman: Lucifer already on Old Sun, and Ahriman in the Bible references to the temptation in the desert.

Atheists use 'the problem of evil' as a reason why there can not be a good which is infinitely good called God. The answer to this question is that evil exists in our world as well as in the astral and spirit worlds, but not in higher worlds above. It occured and was allowed by Divine Providence to be part of the creative development of Man (or mankind as the tenth hierarchy) within our solar system development. Everything we experience and encounter up to the spirit world is a creation from our solar system development since Old Saturn. Spiritual science positions the Luciferic and Ahrimanic influences in this development that unfolds in the higher spirit world and below. On the budhi and nirvana plane no such thing as evil exists.

This module explores how the path of the Christ is to be understood as the balanced 'way through' all these opposing influences, for a rightful and correct natural development in line with the Cosmic Plan. 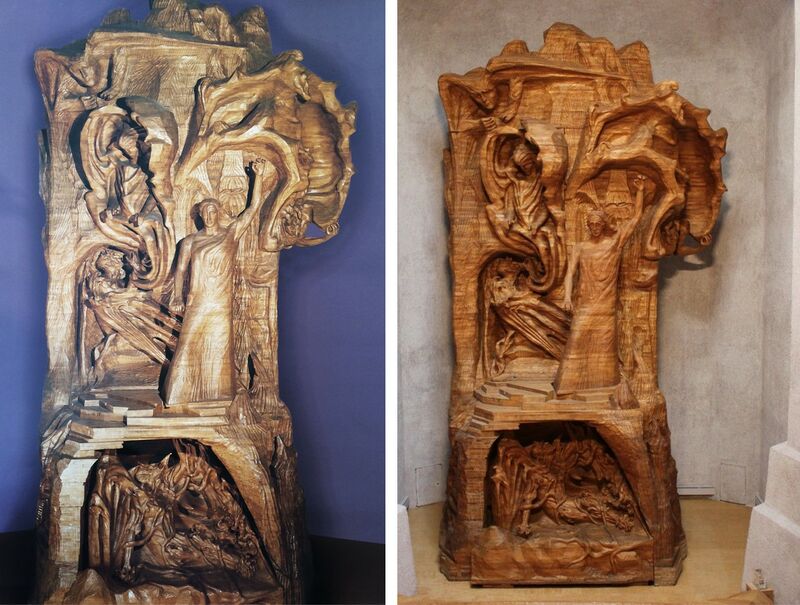 Compare this with FMC00.298 and the creation of the planets of the current solar system, as related to the various CoL of the current Earth stage departure of the Sun and Moon. See also the Discussion are on Ahrimanic beings and their influences.

It is particularly important in the present age for man to recognize this co-operation between Luciferic and Ahrimanic powers; for only by such recognition can he gradually learn to understand the forces that are at work behind the external phantasmagoria of existence. We know very well that we have no occasion either to hate Ahriman or to fear Lucifer, since their powers are inimical only when they are working outside the realm where they belong.

Thus do Luciferic and Ahrimanic forces play into one another in the etheric body of man. We human beings are as it were ourselves the resultant of these forces, we are placed into their midst.

These changes cannot, however, simply come about of themselves. To begin with, a uniform and single action of the soul does not come to consciousness at all in ordinary life, we are quite incapable of bringing such a thing into consciousness.

We cannot get on in our life of soul, in so far as this comes to expression in the etheric body, without Ahriman and Lucifer.

The etheric body has actually this appearance; one can perceive in it Luciferic light and Ahrimanic hardness. If you could look at it, you would not of course see it as we might try to show it in a drawing; you would see it all in movement.

Lecture 1909-03-22-GA107 discusses the 'functional purpose' of Lucifer, Ahriman, and Asuras and how the adverse power still helps evolution a step forward along the original evolutionary intentmeaning they serve a purpose in the development of Man as a free and balanced individual spirit

Christ dies the ‘Death of a God’ on Golgotha to redeem the Physical.

For the descent into Hades, see Sonja Berger.

Sorat, the counter-sun force or anti-christ, stands behind his two servants Ahriman and Lucifer as Christ’s shadow, inspiring them.

Who will be saved from evil and up to when

For the descent into Hades (three days in the grave) and the battle with Lucifer and Ahriman and the link to the judgment day on Future Jupiter, see 1915-04-03-GA161 in the section on the full planetary chain