Twelve as seven and five

The division of twelve aspects or properties into seven and five corresponds to 'day and night', 'visible or invisible', 'enabled or latent'.

This comes back in various aspects:

Schema FMC00.042 below depicts the concept and is discussed further on the page of the zodiac streams 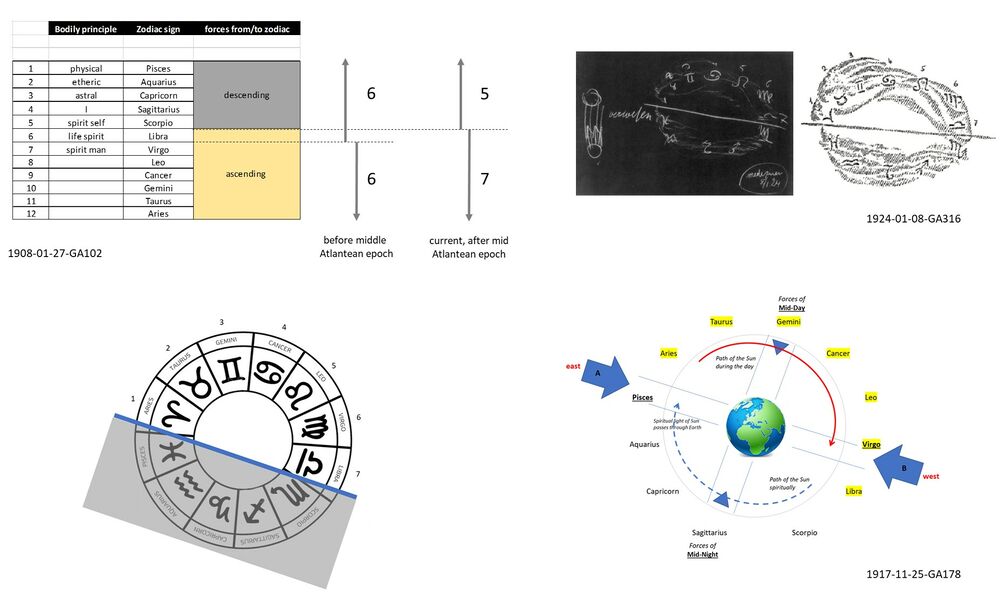 The most high level introduction comes in 1909-08-31-GA113. Going back to beyond Old Saturn and the spheres of eternity, before time, and the zodiac:

As soon as that which in the spiritual world (which as I have said is permanent, eternal, having nothing to do with time) passes into time, it divides itself into good and evil.

This is only a mere indication serving to show that space, when if forsakes its sphere of eternity and takes into itself created things which run their course in time, is divided into good and evil; and in bringing out the good, seven is raised out of the twelve; seven then becomes the true number for temporal conditions. For truths, which belong to time, we must take the number seven as our clue; the remainder, the number five would lead us into error. That is the inner meaning of these things.

In 'Rudolf Steiner - Recollections by some of his pupils', F.W. Zeylmans talks about his first meeting with Rudolf Steiner and how he presented his findings regarding colours and sat there spellbound as he couldn't believe that anyone could give the answers to questions he could not even formulate properly.

The spectrum with the seven colours is only one part of the whole spectrum, the part that is visible in the solar system. To understand the whole spectrum one must draw a circle, and then there are the seven colors of the solar spectrum and on the other side the five peach-blossom colours. You ought really to have taken your start from these twelve. One sees these seven colours because there the astral body swims, as it were, in the colours. But the peach-blossom colour is so subtle and ethereal that it hardly appears at all in external nature; there the 'I' is living in the etheric; peach-blossom is actually the colour of the etheric.