Christ Module 17 - The experience of the year

Maybe the best concise introduction to this topic is the following: Friedrich Rittelmeyer refers to a conversation with Rudolf Steiner whereby he asked what one could do to prepare one-self for a 'damascus-like' Christ experience, and Steiner answered

This is only possible when/after one experiences Christ in the course of the year.

Christ has become the spirit of the Earth after the Mystery of Golgotha, and also lives in the Earth aura.

This module is about Man's conscious soul experience of the cycle of the year:

See: Rhythm of a year for the explanation of how archangels and elementals work in the alchemical process in nature

For an illustration of the first midsummer St-John's imagination, see Schema FMC00.445 below.

Schema FMC00.104 gives an image for contemplation of the statement 'the golden buckets interchanging' (see Goethe's Faust and the Golden Chain) and the work of the archangels and nature's four seasons as per 1923-10-13-GA229 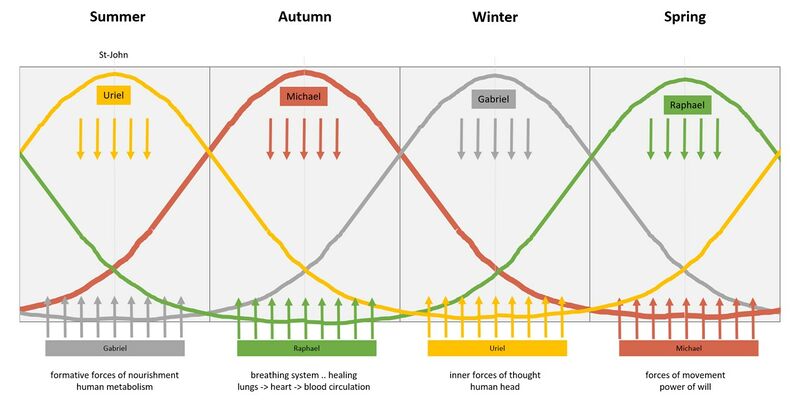 Schema FMC00.445 represents the mid-summer Saint-John's imagination described in 1923-10-12-GA229 as one of the four great imaginations for the cycle of the year. The description from the lecture in the middle, and the blackboard drawing on the right, are linked to the 'Druid Stones' painting by Rudolf Steiner made after his visit to Ilkley Valley in Yorkshire (UK). On the right, picture from the book by Frank Teichmann who describes this correlation between the painting, the landscape of Ilkley, and the Saint-John's imagination in context of the importance of Rudolf Steiner's visits to the Druidic mystery sites in the UK (2002 in DE, 2020 in EN).

Schema FMC00.358 shows the course of the year and the calendar of the soul, by George O'Neil. 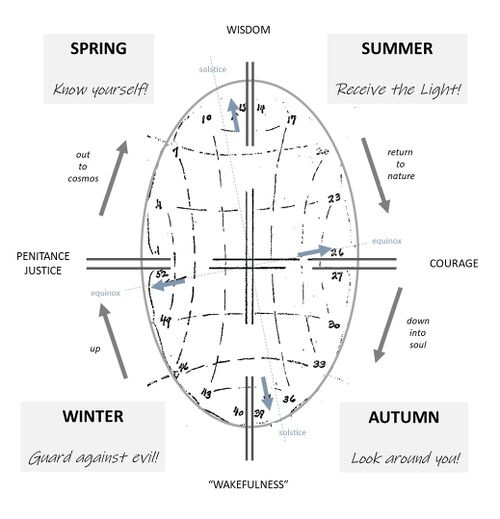 FMC00.023 shows the three meetings, and the yearly meeting at life spirit and archangel level

FMC00.103 shows the three festivals related to the Trinity and EDN-ICM-PSSR

Rudolf Steiner spent at least some 39 lectures on the importance of the Cycle of the Year and the Festivals.

Why? What made it so important .. what is the key message he wanted to get across?

As an introduction, starting 1904 already some lectures, however eg 1910-1912 lectures cover how in ancient times Man was able to feel and experience changes through the year cycle.

From these 39 lectures some 15 are in 1923 and mostly on the meaning of the festivals in three main cycles:

This covers first how the Earth breathes in and out in the cycle of the year, the elementals, and how the 'summer and winter'correspond to 'a dreaming and awake state'. In ancient times men felt and lived along with this rhythm.

(in evo) describes how the year symbolizes in small, the journey of Mankind also in it’s development

describes the experience and 'feeling along with nature' of Man during the seasons of the year.

talks about new elementals arising in the yearly process of nature, related to the appearance of natural clairvoyance and Christ in the etheric:

.. Those men whose spirit is awakened will be able to see beings of a new order in the processes of nature. Whilst the human being who has not yet become clairvoyant will increasingly be able to experience that despite all his melancholy feelings concerning the continual death process, there is something of a rejuvenating quality in nature, the human being whose clairvoyant faculties have awakened will see new elemental beings issuing out of dying nature.

Whilst in outer physical nature relatively little will be seen of the great change at the turn of the twentieth century, the spiritually awakened soul will feel: times are changing, and we human beings have the task of preparing spirit knowledge. It will become more and more important to observe such things and carry them in our consciousness. For men are free either to take up such things for the salvation of humanity or to let them pass them by, which will lead to disaster.

.. at the turn of the century a relatively new kingdom of nature-beings will come into being, arising from nature like a spiritual spring, and human beings will be able to see and experience this. And though it would show great apathy of soul if a person were unable to perceive the sprouting forth of springtime, there is more to come. Those people who will grow able to experience as a fact of nature what has just been described, will preserve these impressions in quite a different way than through ordinary memory.

They will carry beyond the threshold the new elemental spirits that stream towards them, as the seeds carry their life through the winter into spring. What was experienced in spring and what was experienced in autumn, this bursting forth of nature in the spring and this melancholy in autumn, had no connection one with the other in the past. What the cosmos gives out from its memory enables us to carry over something of what we have experienced in the autumn into the spring. If we let the elemental forces of autumn work in us, then we can feel in a new way what will be given us in the future.

Everything will acquire something new in the future, and it is our duty to prepare ourselves through our knowledge of the spiritual to understand it. For Spiritual Science has not come into the world through the personal whims of men, but because new things are happening in the heavens, that can only be perceived when men take up the results of spiritual research. This is why the theosophical movement has come into being.

In the quick rhythmic repetition of the seasons of the year, the Divine-Spiritual Being which descended into the depths of Earth to permeate Nature's process with the Spirit, accomplishes this process. It is the ensouling of Nature with the Forces of the Beginning and of Eternity which must remain at work; even as Christ's descent is the ensouling of Mankind with the Logos of the Beginning and of Eternity, whose working for the salvation of mankind shall never cease.

... refers to a conversation with Rudolf Steiner whereby he asked what one could do to prepare one-self for a 'damascus-like' Christ experience, and Steiner answered

This is only possible when/after one experiences Christ in the course of the year.

The experience of the year is a soul experience, feeling with what happens to nature in the seasons.

However we can also make links from a spiritual scientific perspective as follows:

Calendar of the soul

Monthly meditations on the Twelve Virtues