Elementals are 'beings of the elements' that make up the physical kingdoms around us, the mineral, plant, animal and human kingdoms. They are known as gnomes, undines, sylphs, and salamanders. Each corresponding to one element: respectively earth, water, air, and fire.

They are not really spiritual beings because they do not have a spirit, rather they are astral beings with one of the elements. They are beings that remained behind and have not been able to attain a spirit. (FMC00.145)

They are sometimes also called nature beings or nature spirits. Different terminology exists in various Germanic, Norse and other mythology and legends (FMC00.145). Numerous people with natural clairvoyance have observed these beings in nature (FMC00.144 and references below).

Salamanders came into existence as higher animals brough 'down' to earth 'too much', and as a result for example an ape keeps something in the physical organization that can not go back to the group soul at the end of the physical life of that ape.

Note: in the above, we distinguish these natural and useful 'elementals of nature' from the general term of elementals as astral entities, created by Man and a manifold of activities in the world.

Schema FMC00.145 gives an overview of the 'beings of the elements' and the terminology

Schema FMC00.146 sketches the structural make-up of the elementals. In the table on the right, the subphysical refers to the invisible substances that make up the basic parts of the physical. On the left, the etheric is not a plane or world of consciousness, but the connection between the higher worlds and the emanation in the forms on the physical plane. This is usually regarded as a structural element in the bodily principles of Man or the other kingdoms of nature on Earth. See also note in Discussion area.

Schema FMC00.142C lifts out one aspect from Schema FMC00.142, graphically depicting the origin of elementals as offsprings of the spiritual hierarchies in previous evolutionary stages. 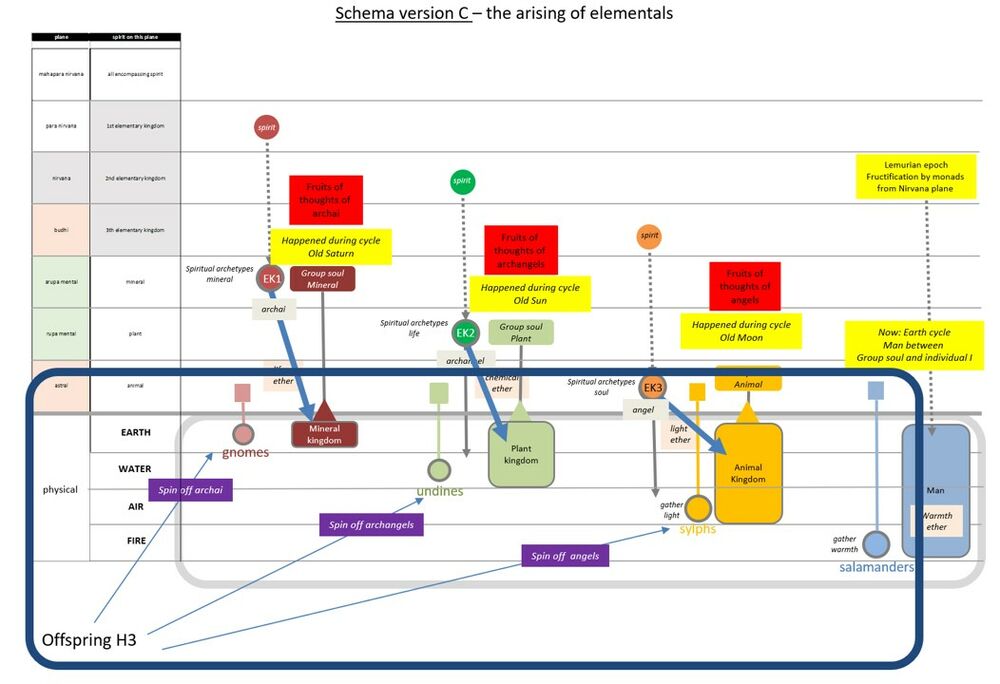 Schema FMC00.144 gives a non-exhaustive list of some books on elementals; more info in the section below.

is the key lecture for an overview on elementals, and talks about

Elementals are beings that remained behind in evolution, and have not been able to attain a spirit.

.. since the later is the fruit of the earlier, these would then find no bodies suitable for them. They are, as it were, too good for the bodies of a subordinate order and for the other bodies they are too bad. They must therefore live a bodiless existence. They must cut themselves off entirely from the progress of evolution. Why have they deserved this? By reason of the fact that they have not made use of life!

The world is around them; they have possessed senses in order to perceive the world, to enrich the life-kernel and mold it to a higher stage. They do not advance with world evolution, they remain behind at a certain stage. Beings that stay behind at such stages appear in a later epoch with approximately the character of the earlier age. They have grown together with it, but not in the forms of the later epoch. They appear in a later epoch as subordinate nature-spirits.

[ In fact the human race will furnish a whole number of such new nature-spirits in the second half of the Jupiter evolution, for man will have fully completed the fifth principle at the Jupiter stage. For those who have not used the opportunity on Earth to develop the fifth principle there will be no available form. They will appear as nature-spirits... -> see more on Future Jupiter ]

Just the same occurred in the case of our present nature-spirits in the earlier periods of evolution ..

When we observe a plant in the usual way we do not in the least sense the presence of an elemental being dwelling in it, of something spiritual; we do not dream that every such plant harbors something which is not satisfied by having us look at it and form such abstract mental pictures as we commonly do of plants today. For in every plant there is concealed — under a spell, as it were — an elemental spiritual being; and really only he observes a plant in the right way who realizes that this loveliness is a sheath of a spiritual being enchanted in it — a relatively insignificant being, to be sure, in the great scale of cosmic interrelationship, but still a being intimately related to man.

The human being is really so closely linked to the world that he cannot take a step in the realm of nature without coming under the intense influence exercised upon him by his intimate relations to the world. And when we see the lily in the field, growing from the seed to the blossom, we must vividly imagine — though not personified — that this lily is awaiting something. (Again I must use men's words as I did before to express another picture: they cannot quite cover the meaning, but they do express the realities inherent in things.) While unfolding its leaves, but especially its blossom, this lily is really expecting something. It says to itself: Men will pass and look at me; and when a sufficient number of human eyes will have directed their gaze upon me — so speaks the spirit of the lily — I shall be disenchanted of my spell, and I shall be able to start on my way into spiritual worlds. — You will perhaps object that many lilies grow unseen by human eye: yes, but then the conditions are different, and such lilies find their release in a different way. For the decree that the spell of that particular lily shall be broken by human eyes comes about by the first human glance cast upon the lily. It is a relationship entered into between man and the lily when he first lets his gaze rest upon it. — All about us are these elemental spirits begging us, in effect, Do not look at the flowers so abstractly, nor form such abstract mental pictures of them: let rather your heart and your Gemüt enter into what lives, as soul and spirit, in the flowers, for it is imploring you to break the spell.

Human existence should really be a perpetual releasing of the elemental spirits lying enchanted in minerals, plants, and animals.

An idea such as this can readily be sensed in its abundant beauty; but precisely by grasping it in its right spiritual significance we can also feel it in the light of the full responsibility we thereby incur toward the whole cosmos. In the present epoch of civilization — that of the development of freedom — man's attitude toward the flowers is a mere sipping at what he should really be drinking. He sips by forming concepts and ideas, whereas he should drink by uniting, through his Gemüt, with the elemental spirits of the things and beings that surround him.

I said, we need not consider the lilies that are never seen by man but must think of those that are so seen, because they need the relationship of the Gemüt which the human being can enter into with them. Now, it is from the lily that an effect proceeds; and manifold, mighty and magnificent are indeed the spiritual effects, that continually approach man out of the things of nature when he walks in it. One who can see into these things constantly perceives the variety and grandeur of all that streams out to him from all sides through the elemental spirituality of nature. And it flows into him: it is something that constantly streams toward him as super-sensible spirituality poured out over outer nature, which is a mirror of the divine-spiritual.

In Schema FMC00.145, the two diagrams are contradictory, the original typoscripts for the 1905 lecture are to be investigated on nuances versus the common english translation, the 1908 lecture table is advised.

This section provides confirmation of the elementals working in nature through witness reports from people. As Rudolf Steiner mentioned, miners and farmers sometimes had real experiences with gnomes. Gnomes, sylps, undines and salamanders are called elementals and real beings. We hear of them in many country myths and folk stories. People with supersensible capabilities, say natural clairvoyance, have a vision of these astral beings and their working in the etheric. It's interesting to survey the literature for a sampling of witness reports and experiences (surely non-exhaustive). Besides reports by individuals the books by Marjorie T. Johnson and Thomas Mayer also give a whole range of witness reports and interviews.