In the third Lemurian epoch the Moon and the Earth separated, whereas before they were a single body.

The Reunion of Moon is timed approximately around the seventh to eight millenium in this current fifth epoch. Rudolf Steiner seems to point out this will indeed happen before the end of the Current Postatlantean epoch and the Sixth epoch.

It will have a major impact on oa

Schema FMC00.190 is a 'napkin' drawing that depicts (middle) the seven epochs, and the process of separation and reunion of Sun and Moon. This to accomodate the development of the human being and the development of the fourth principle, the Human 'I'. The Earth is held in a cradle of influences from Sun and Moon, see a.o. description in the Emerald tablet (on: References to the concept of the Golden Chain) and The two etheric streams. Below the three divine interventions are shown with embedded Schema FMC00.185 (by Rudolf Steiner). In the current epoch, the Earth is held embedded in the Moon and Sun spheres. The divine being of Christ came across the spheres and the Sun to 'fructify' humanity on earth with an 'infusion of budhi', that is depicted by the metaphoric image on the right. 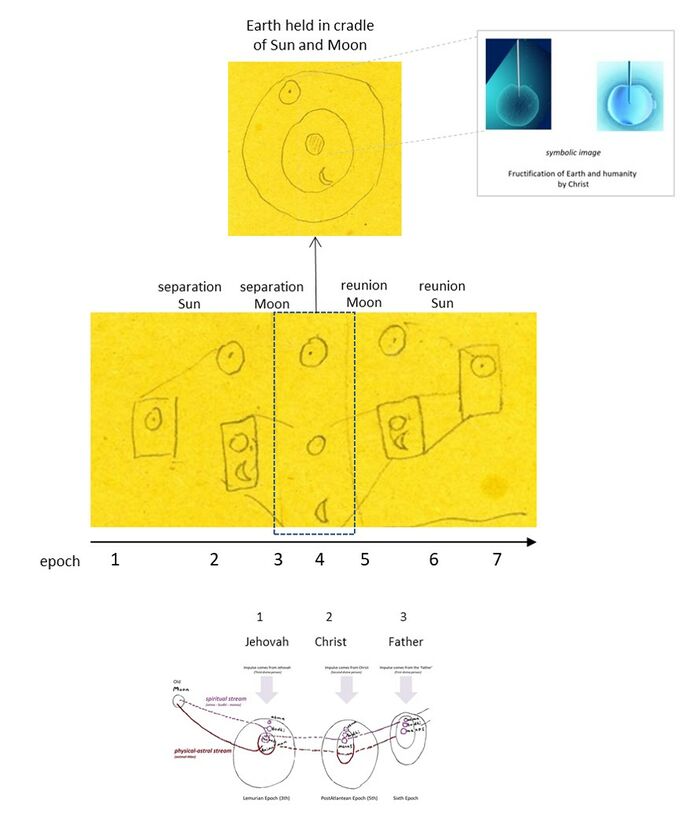 There will come a time when both the Earth and humanity have made such progress in evolution that the forces and beings that had to separate from the Earth during Lemurian times to enable earthly beings to continue to progress will be able to reunite with the Earth.

At that time, the Moon will reconnect with the Earth. This will happen because sufficient numbers of human souls possess enough inner strength to make these Moon forces fruitful for further evolution.

This will take place at a time when

Souls whose development has been delayed will have accumulated so much error, ugliness, and evil in their karma that they temporarily form a distinct union of evil and aberrant human beings who vehemently oppose the community of good human beings.

In the course of its development, the good portion of humankind will learn to use the Moon forces to transform the evil part so that it can participate in further evolution as a distinct earthly kingdom.

Through the work of 'the good part of humanity', the Earth, then reunited with the Moon, will become able to reunite with the Sun after a certain period of evolution, and also with the other planets. After an interim stage that resembles a sojourn in a higher world, the Earth will transform itself into the Future Jupiter state.

Also: regarding the development towards evil, note the use of moon forces in Black magic

.. In the seventh millennium the bodily nature will be capable of development only until the 14th year of life. Women will then become barren. An entirely different form of earthly life will ensue. This is the time period [age/epoch] when the moon will again approach the earth and become part of it.

.. Man must know what it means to say that the moon once left the earth and will enter the earth again. Just as the separation of the moon [in the Lemurian epoch] was a decisive event, so too will be its re-entry. It is true that as human beings we shall still be inhabiting the earth, although birth will no longer take place in the ordinary way. We shall be connected with the earth by other means than through birth. We shall, however, have evolved in a certain respect by that time. And we must learn to connect what is happening today - I mean the fact that the intellect is becoming more and more shadowy - with what will one day be a great event in earthly evolution: the re-entry of the moon into the substance of the earth.

.. try to imagine what will happen if men go on unfolding no other kinds of thoughts until the time is reached in the eighth millennium for the moon-existence to unite again with the earth.

.. in the seventh millennium, a time will come when their bodily nature will be capable of development only until the fourteenth year of life. Then, women will cease to be fertile; an entirely different form of living on earth will come about. That will be the time when the moon will again approach the earth and will be incorporated into it.

.. it is intended that the human being shall be lifted up, in that time when women will no longer be fertile, when the eighth millennium will have arrived and the moon will unite again with the earth. The earthly shall then remain behind, and the human being only direct it from outside — like a foot stool. It will be something he is not supposed to take along with him into his cosmic existence. Human beings should prepare themselves so that they need not become one with what will someday have to develop on the surface of this earth in the manner described above.